​To Be With You In Heaven by Scorpions
3.11 The Early Departure of Dr. Angel Locklear
Besides spending nights with Salome Moon, the dancer, Tony Corleonesi had nothing to occupy himself with. He needed a job, a project, anything. That's when he decided to start keeping an eye (read: stalking) Beryl. He knew he angered many bad people at the party. People who could hurt Beryl and her family. It couldn't be undone, but it gave him a good excuse to watch Beryl's house and her every move.
The week after their official breakup Beryl didn't leave the house. But later when she finally emerged, Tony sucked in air sharply. She looked absolutely gorgeous and all he wanted to do was to run to her and take her in his arms and kiss her to oblivion. Then Dr. Angel appeared and took her and Christian to Oasis Springs. Tony didn't like what he saw. He didn't like it at all. The doctor was making advances at her and she let him. Tony gritted his teeth watching it. Who did the doctor think he was? He definitely didn't meet Tony's standards of a true gentleman. Kissing her in front of the kids! What a moron!
This called for an action. Someone had to check him out. Naturally, it had to be Tony. 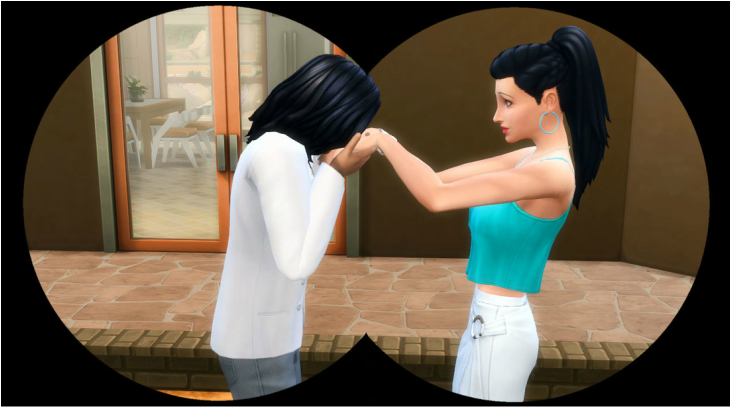 He found out what hotel the doctor was staying in, called the desk clerk and tricked him into telling him the doctor's room number. The next day he put on his disguise and set out to the hotel.
​ 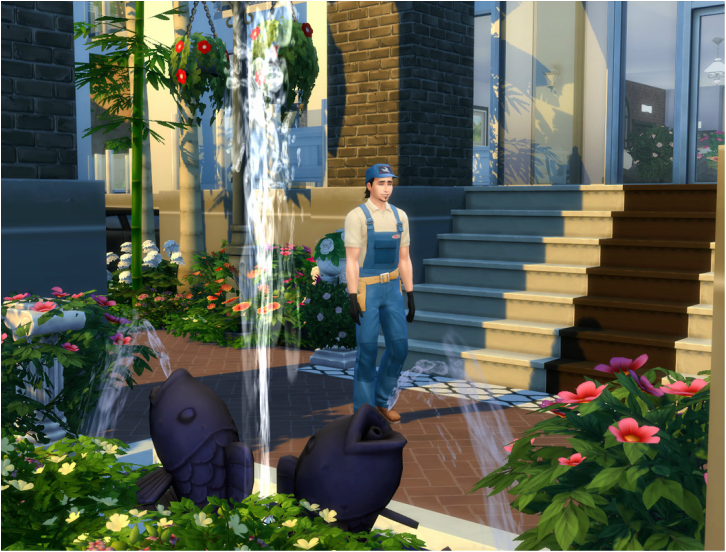 ​He entered the lobby and with a confidence of a person who belonged there continued to the elevator.  No one stopped him on his way. His disguise was perfect and provided access even to those parts of the hotel only the personnel was allowed to enter. Not that he needed that right now. But one never knew when even the slightest advantage might prove useful. 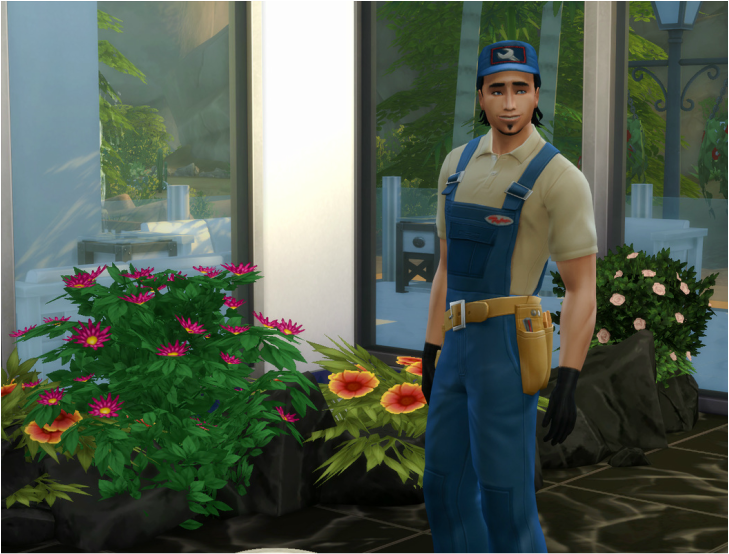 The elevator car spew him out on the third floor where the doctor's room was situated. Tony followed the door signs until he found the one he was looking for. 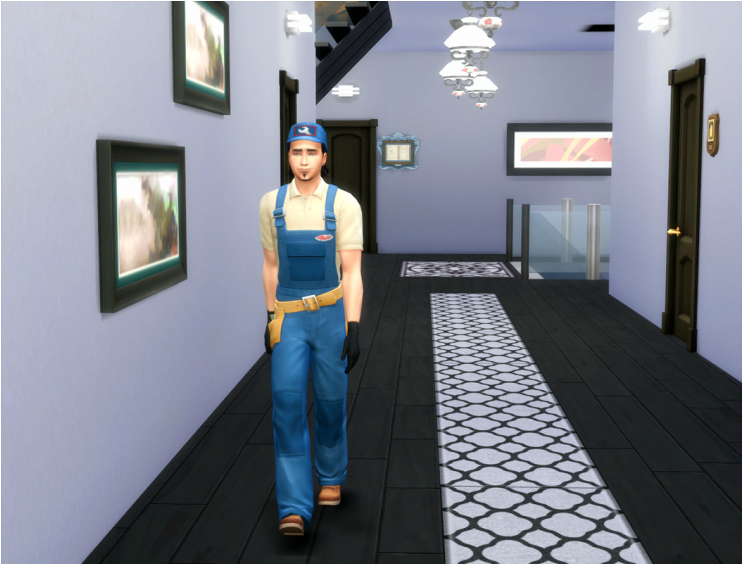 His tool belt contained more than the usual repairman's equipment. He had various picklocks in it, the stuff for making copies of keys and opening safes and much more. Tony had to appreciate the joke. He carried all those things in broad daylight under everyone's noses and nobody knew.
​Opening the door was a piece of cake. 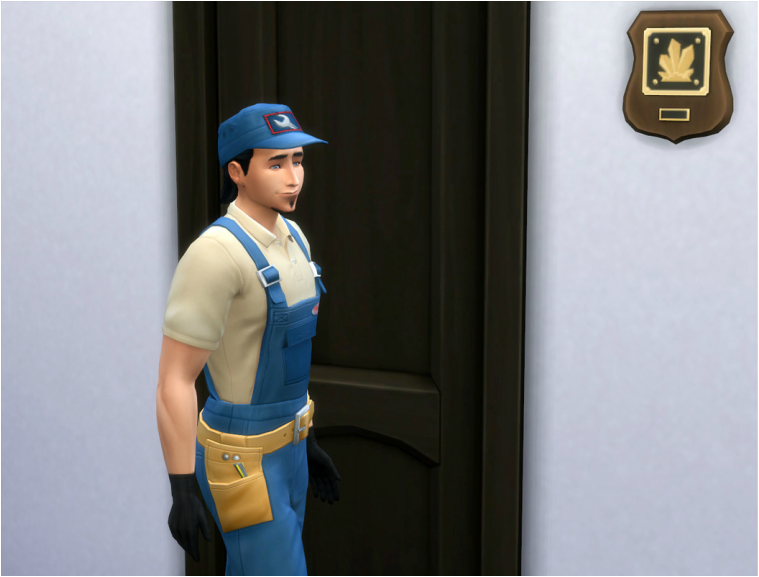 He searched every inch of Dr. Angel's room, but didn't find anything suspicious or incriminating. He noticed there were lots of cosmetic and hair products everywhere though. On the bathroom counter, on the kitchen counter, on the nightstand... He might not have found a proof of anything shady in the doctor's life, but his obsession with his hair was a little bizarre to put it mildly.
Tony's mind created a picture of his son being raised by this man, receiving hair products for his every birthday and every Christmas, and he shuddered. No way he's letting this man into Beryl's and Christian's life! 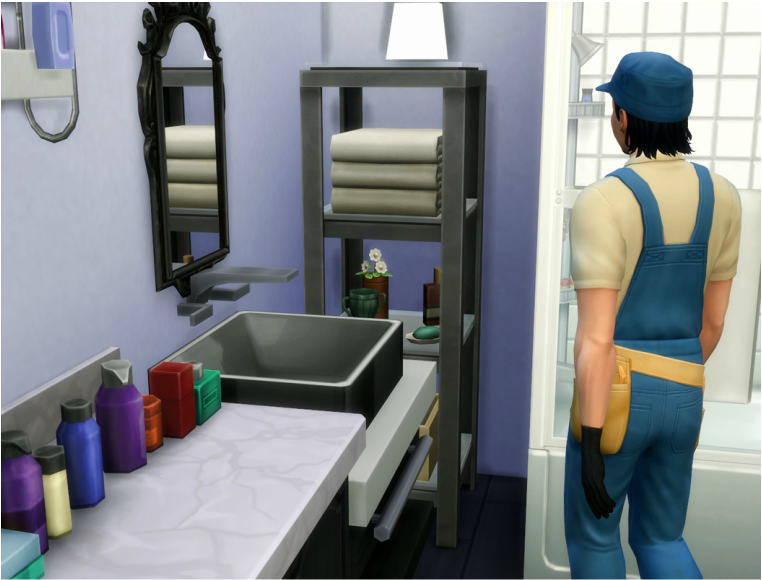 ​He decided to sit and wait for the doctor and talk to him in person. He was going to gently suggest that the doctor found himself more suitable woman. A hairstylist perhaps?
While Tony was waiting, his imagination kept supplying him with vivid images of Dr. Angel and Beryl. Her fingers in Dr. Angel's hair while they kissed. Beryl lying on a bed and Dr. Angel's hair brushing against her naked skin when he was making love to her. Beryl stroking his thick black hair whispering his name.
​Tony shook his head. No. Just no. He won't let that happen. 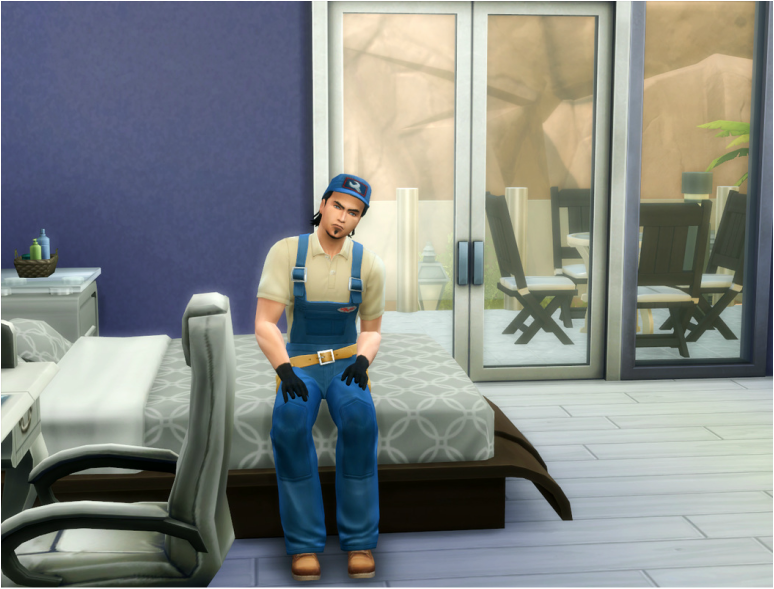 His mouth went dry after all those horrible thoughts. He got up a walked to the fridge to get himself a drink. The fridge was full of - surprise, surprise! - hair products and preparations and food supplements. Tony looked for an orange juice or ice tea, but without result. The only thing remotely resembling an ice tea he found, was the content of strange looking misted cups arranged in a row. He considered giving up and pouring himself a simple glass of water, but he was curious. He picked one of the cups and sniffed at the liquid. It smelled of blueberries and herbs. He took a careful sip, ready to spit it out, in case it turned out it was a dandruff shampoo or a shower gel. It tasted good and he swallowed it. Then he emptied the cup. Then he emptied three more. He didn't start blowing bubbles, so he guessed everything was all right. Actually, he felt rejuvenated.
​He sat down again and waited. 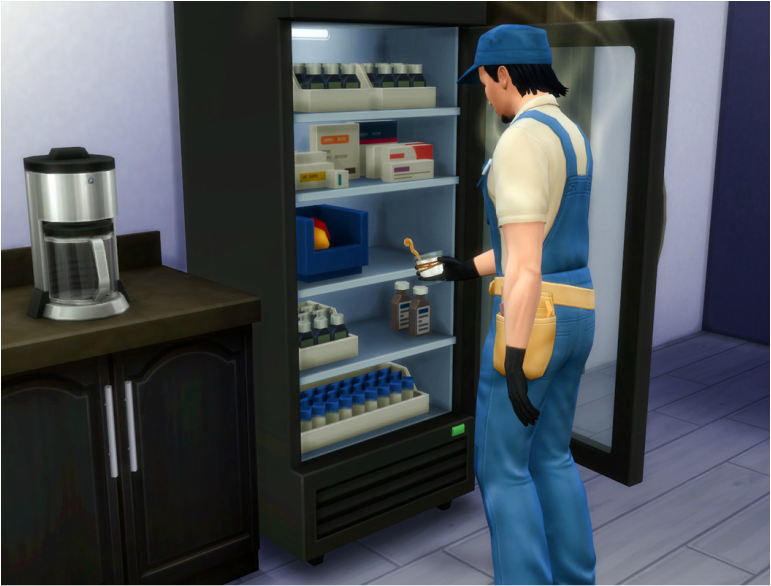 "Oh," he said when he opened the door and spotted Tony. "The desk clerk didn't tell me something was broken in my room."
​
"It isn't," Tony grunted. "YET," he added. 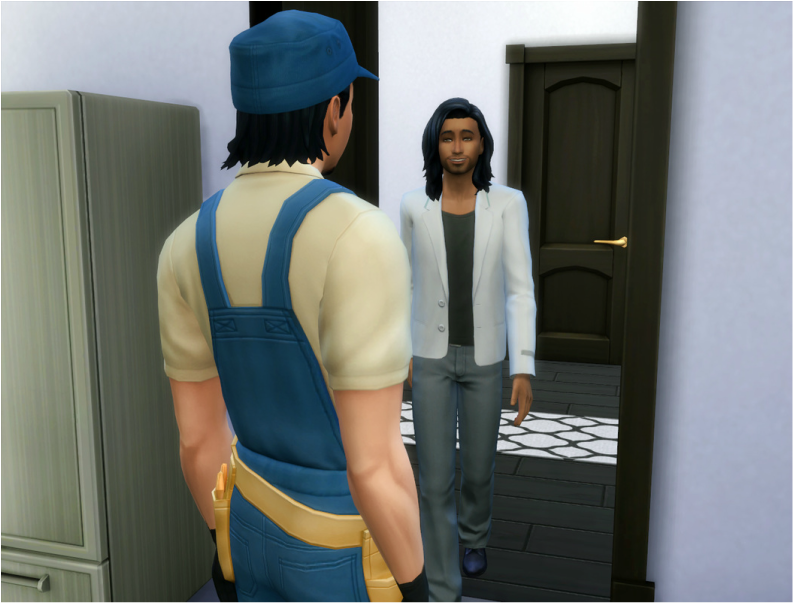 Tony pulled a chair from the desk and ordered, "Sit!"
​
​Dr. Angel was so taken aback by his presence in his room, that he obeyed. 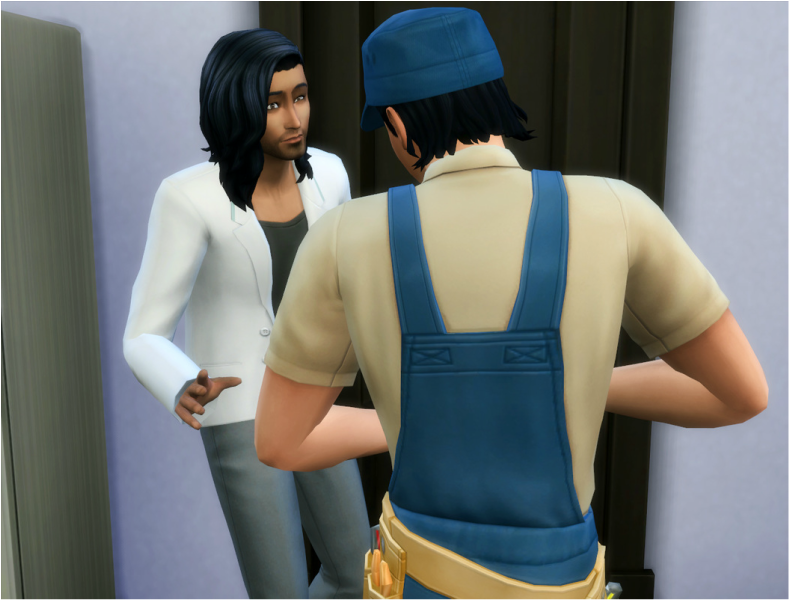 "Why are you dressed as a repairman, Mr. C ? What are you doing in my room?" Dr. Angel was asking all puzzled. Then his expression changed as something crossed his mind. "It's about the money, isn't it? You have come here to look for the money, haven't you?"

This caught Tony's attention. It was always useful to learn more when money was mentioned. "Money?" he asked slowly.

"The money you donated for the orphanage, of course," the doctor said.
​
"You still have it? All of it? Here?" Tony inquired. 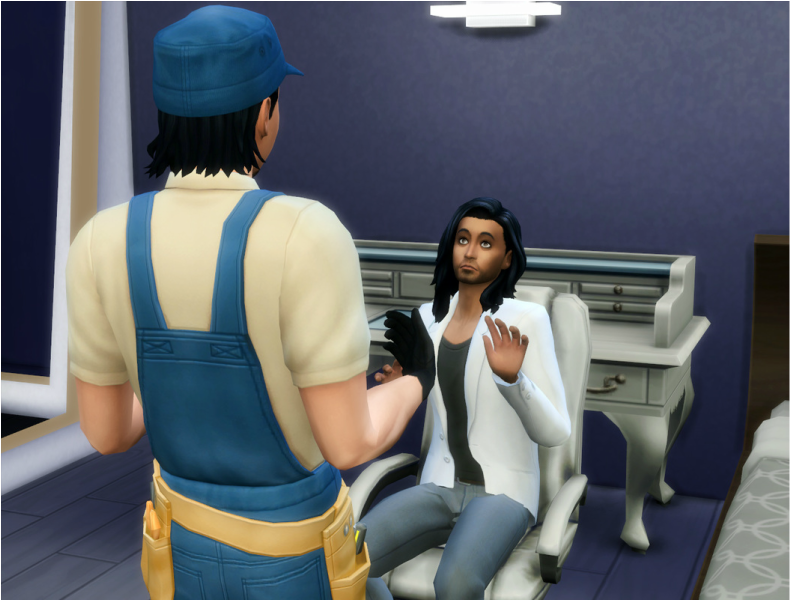 ​"I knew you'd want it back. It was too good to be true. But I don't have it anymore. We invested it into the construction. The orphanage is completed." He watched Tony playing with the tools on his belt and his large hand casually running over the pipe wrench handle. Dr. Angel started talking faster with his voice carrying a rather higher pitch. "But I'm sure we can figure something out to... to compensate your loss. There's no need for violence!"
​ 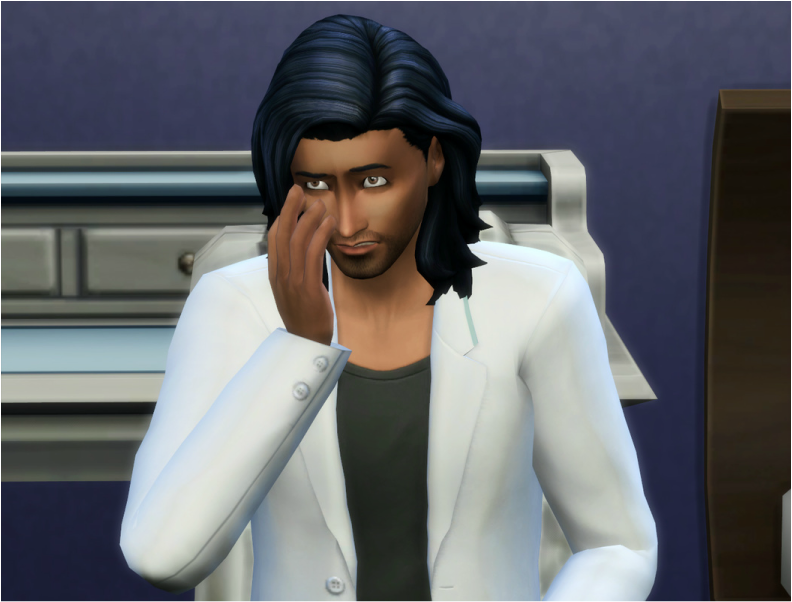 ​"But I've been in a very urgent need of violence these days," Tony said in a low voice, which sounded more like a menancing growl of a predator and made Dr. Angel flinch a little. "I'm not here for the money though," continued Tony. "I'm here to make sure that you'll stop seeing Beryl Heffner!" 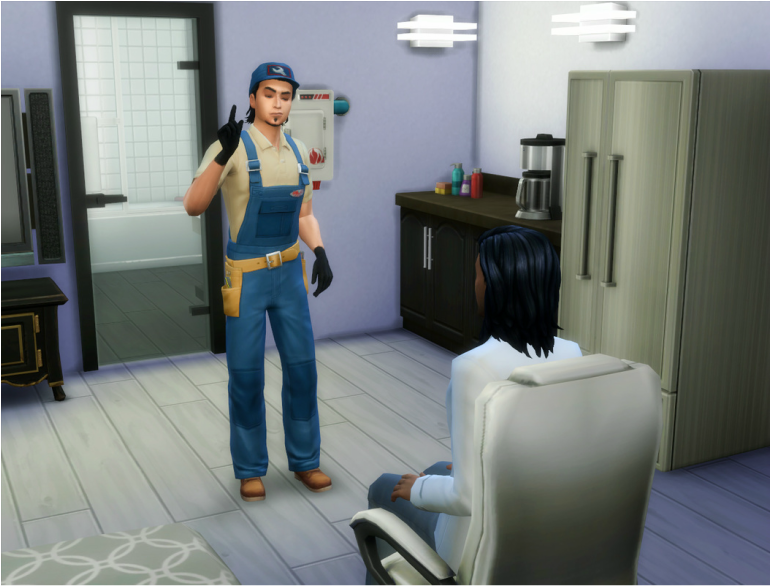 Dr. Angel caught on. "But... but I had the impression she's available. She told me she wasn't seeing anyone."

Tony was reaching for his tool belt again. "She's not available. Not to you!" he snarled waving the pipe wrench in front of the doctor's face.
​
"Okay! Okay!" Dr. Angel shouted. "What do you want me to do?" 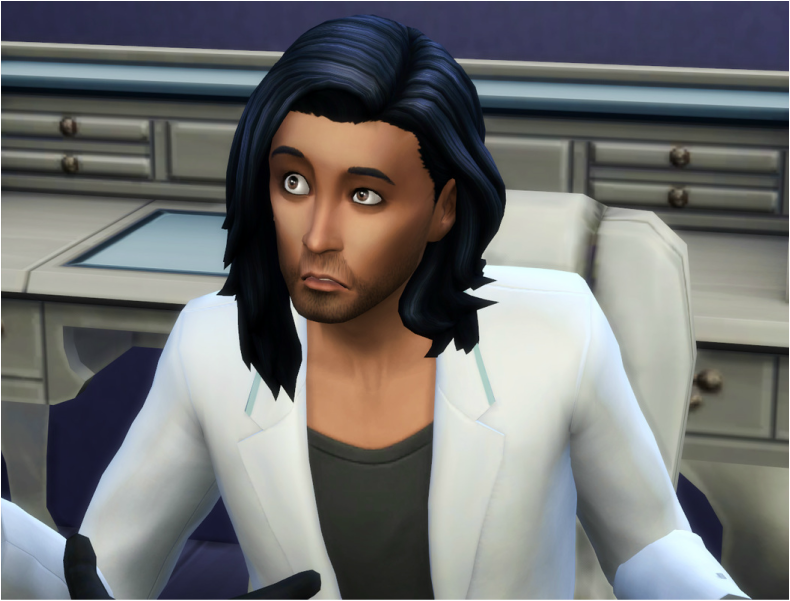 "You're going to leave the town and never contact Beryl again," instructed him Tony, lowering the pipe wrench.

"But there's a Medical Conference here! I'm supposed to give a lecture about the effects of fertility massages the day after tomorrow!"

The pipe wrench was raising up again.

​"All right! All right! Just put that thing away! I'll excuse myself and check out. But I should at least give Beryl a call and let her know I'm leaving or she might get worried!"

Tony considered it. "You can do that. But not a mention about me! And don't you dare go to the police or I will pay you another visit and we won't have such a friendly chat as today."

The doctor didn't say anything else, just sat there gloomily.

"Then it's settled," Tony said. "Let's hope we'll never have to see each other again." ​
​
Having accomplished what he wanted, he headed for the door. 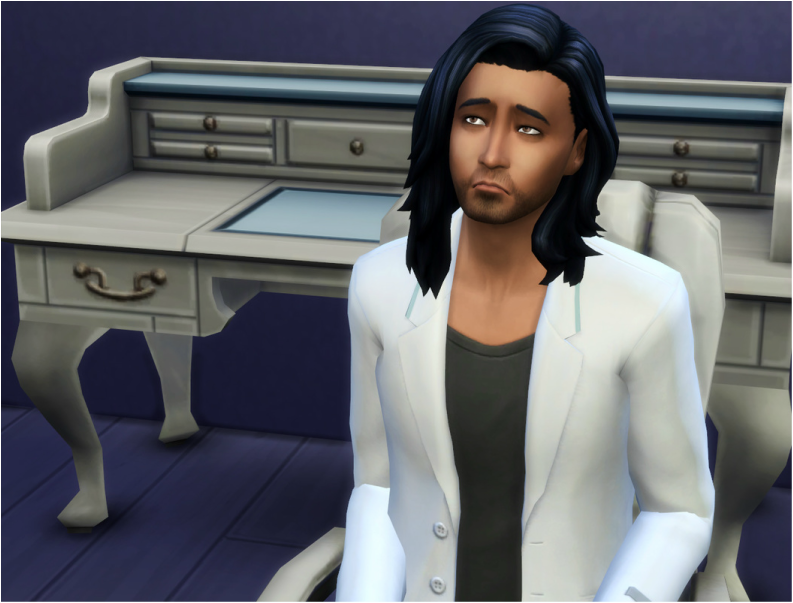 ​He was almost out of Dr. Angel's room, when he changed his mind. He needed to release his anger and frustration of the breakup with Beryl and the weird doctor needed a lesson. Tony turned around and reached for another tool on his belt...
​ 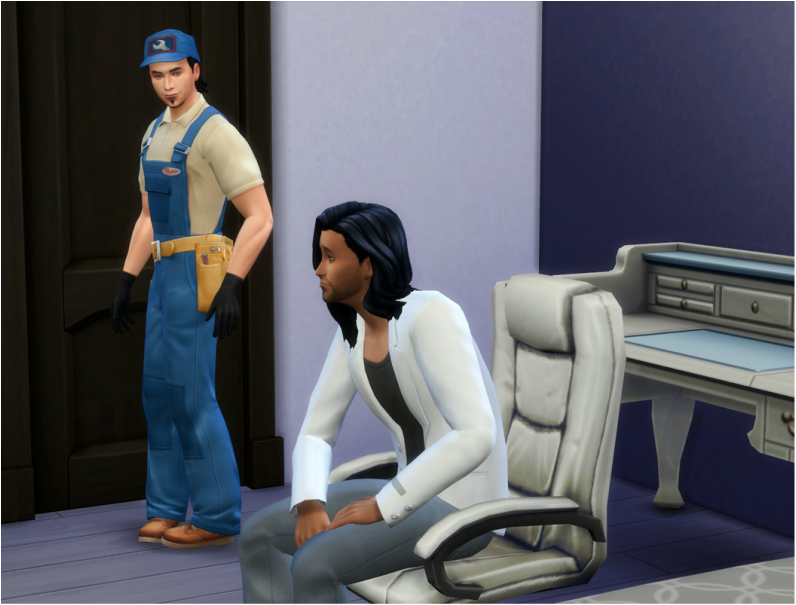 ​If anyone was passing by the door of Dr. Angel's room, they would hear his muffled screams.

Unfortunately for the good doctor there was no one to hear him or help him. 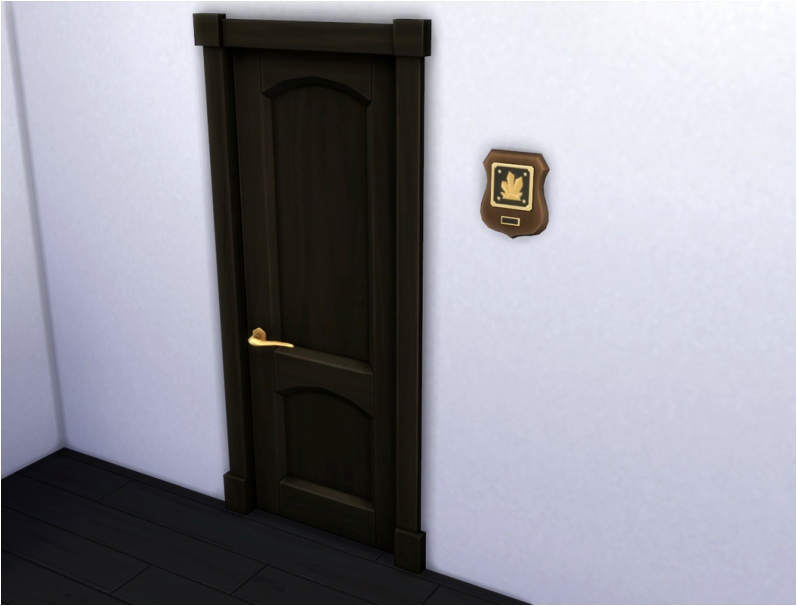