I watched my sister as she picked the Heffner boy at the bar and led him to the basement. The way she had been looking out for him before left me wondering whether it was something more to her than just a fling this time. 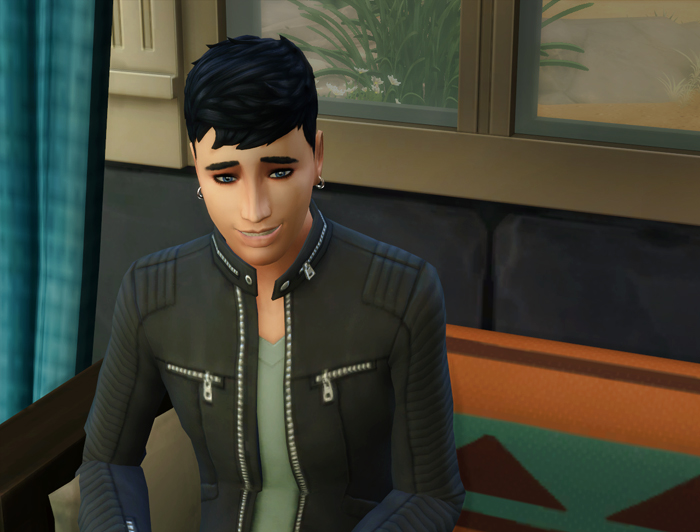 Then Max sat down next to me. "Hey, man! Saw your sister being way too friendly with that Heffner plumhead. Care to tell me what's that about?"

"Girls," Max snorted. "They like word plays. I want a clear answer. That's why I've got you, my man!" He put his arm around my shoulders like we were good old friends. Which we are not as far as I'm concerned. I slowly shook Max's arm off me.

"Raven likes fun and challenges. And that's what that was about," I told him.

Max grinned at me. "Good. I hope he's a mess, when she's done with him. Then we won't have to beat the plum out of him."

He obviously forgot that last time it was him who got his plum kicked. ​I thought our conversation was concluded, but Max saw it differently.
​​ 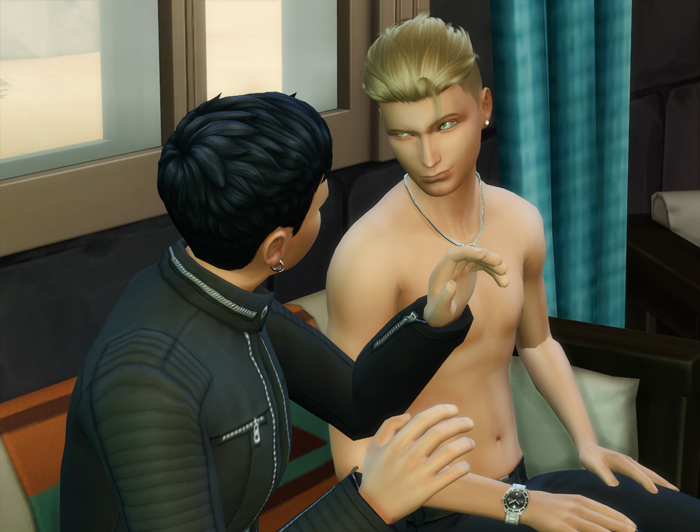 "So, Thomas. What about you and the ugly Heffner chick. Any progress on that front? Are you any closer to get her knocked up?"

I froze and had to supress the urge to punch him in the face. Moron. Why did everyone think Kellie Heffner was ugly? Didn't they see past her glasses and baggy outfits? From up close there were bright eyes behind those glasses. When she wasn't wearing the cap, her hair shone like a living fire in the sun. The other day at school I sneaked in when the girls were having their gym lesson and Kellie looked more sporty than many of the other girls. What began as taunting of Kellie's brother turned into my personal obsession with her. I wasn't just trying to "knock her out", well I wanted that too, but I also wanted to learn everything about her so that I could impress her. What is it that draws me and my sister to the Heffner siblings so much? 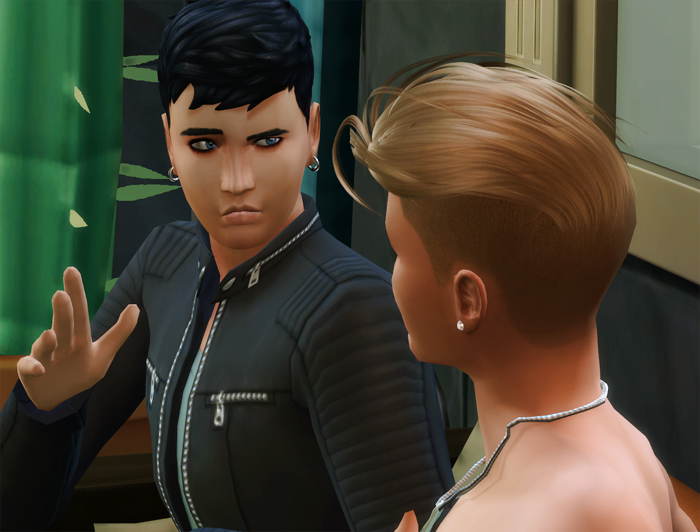 Max was staring at me, still grinning like an idiot and waiting for me to answer his question. I looked away and said, "She's not ugly."

Max threw his head back and started laughing like a crazy, slapping my back. "I didn't know you had a sense of humour, Nightshade!"

"See for yourself," I gasped and jerked my chin toward the entrance. "She's not ugly at all."

Max followed my gaze to the two divas who just entered. "I don't know about the Heffner chick, but the red head over there is really hot and she's going to be my date tonight!" he said.

"The red head beauty is Kellie Heffner, you moron!" I hissed at him.

"No way. This is not her. Is it?" He got up and watched her more closely. His eye widened with realization. "Holy cowplant, it is her!"

From that moment on I didn't pay any attention to him. He could stand on his head and I wouldn't notice.
​ 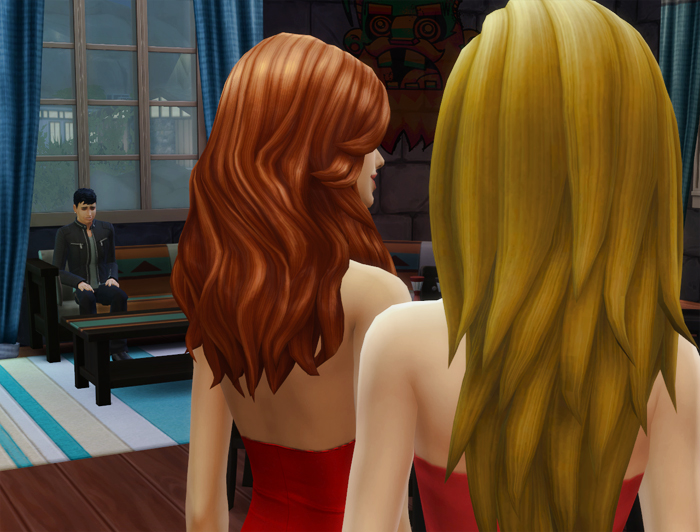 Max and everyone else in this bar just discovered what I have known for some time, that Kellie Heffner was anything but ugly. And after tonight I'm sure no one will ever call her that again. She just graduated from "ugly duckling" to the queen bee.
​ 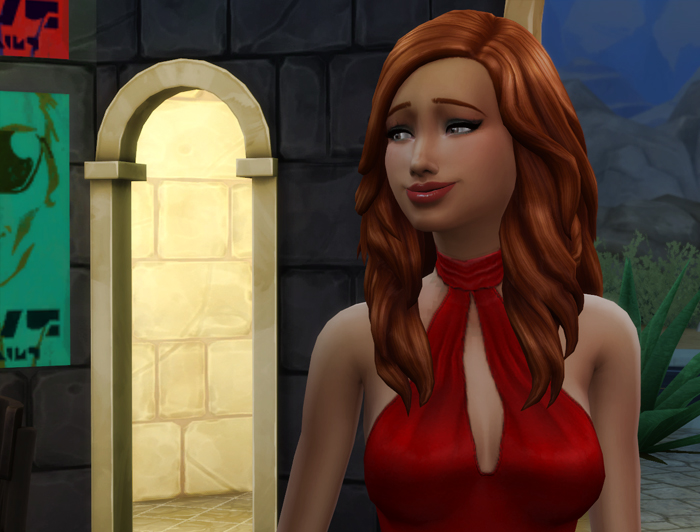 The moment she entered, the place has turned into a hunting ground with her being the prey. I noticed all other guys in the room switching into hunter mode. It was subtle. I could see it only because I felt the thrill too. I got up and wanted to intercept Kellie before she reached the bar, but I suddenly had a problem with my pants being too tight in certain parts. Yeah, that problem. I sank back in the sofa. I seriously needed a cold shower and fast before I could walk again painlessly.

Before she and Kristi headed to the bar, Kellie looked in my direction. She smiled amusedly as if she knew exactly what was happening to me. All I managed was a lopsided grin and squeaky "Hi." Yeah. Well done, Thomas. You're a winner of the "Idiot of the night" prize. You beat even Max and his stupid shirtless dance.

Where's the charmer in me when I need him? Why is it so much easier to impress the girls I don't actually care about? 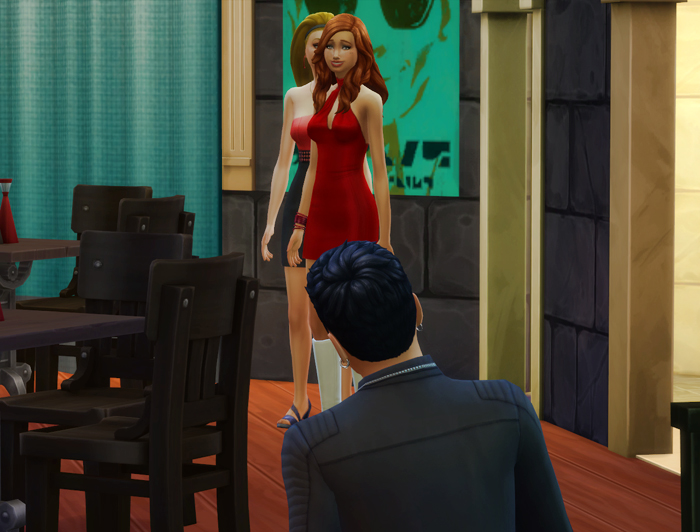 I couldn't take my eyes off of Kellie in that killer red dress. Which made things in my lower department even worse. She looked like a materialized dream of every teenager. I wanted nothing more than to crawl to the feet of this red-haired godess and offer myself as her slave. But instead I had to crawl in the bathroom to cool off. There was a hunting season outside and I was missing it. Damn! 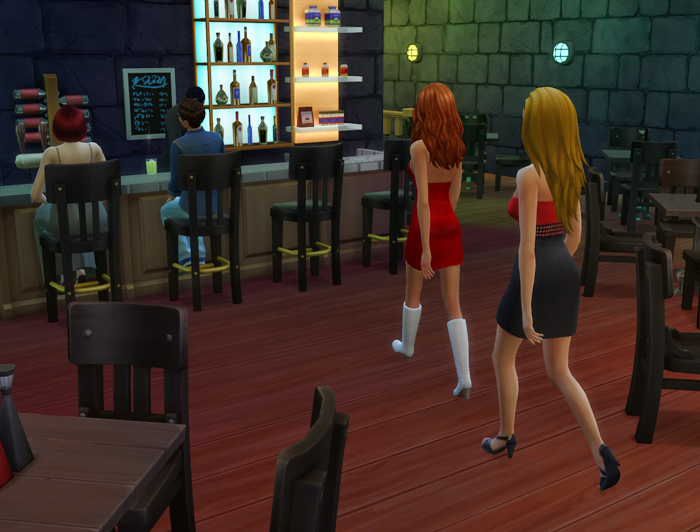 "Why did Chris pick this place?" I was wondering when Kristi and I were standing in front of the Camel's back club. "It isn't our regular gathering place."

We had to pay for a taxi to take us here to Oasis Springs. It wasn't very considerate of Chris. Not everyone had the pocket money our mom was giving us. No matter what Max Caliente and his goons thought of us and our friends, we weren't all rich and spoiled. Especially Mathias Rosa who came from a quite poor family. I wouldn't be surprised if he didn't arrive to our gathering tonight because of that.

"Maybe he thought we needed a change of a scene. I think it's a good idea. We're going to meet new people." Kristi never missed a chance to defend my brother. Even against me. 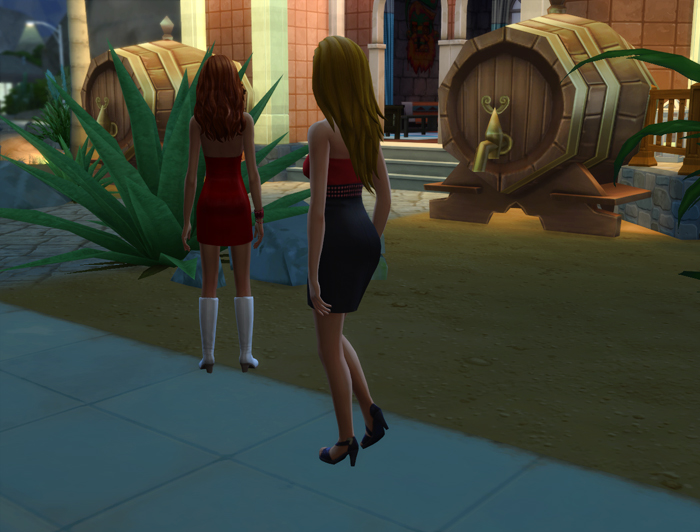 "New people, Uh-huh," I said when I spotted an unwelcome familiar face. "All I'm seeing is shirtless Max Caliente."

"I have a bad feeling about this."

I was looking around searching for Chris, but instead I spotted Thomas Nightshade sitting there on a sofa eyeing me with the funniest expression on his face. Almost made me burst out of laughter.
​ 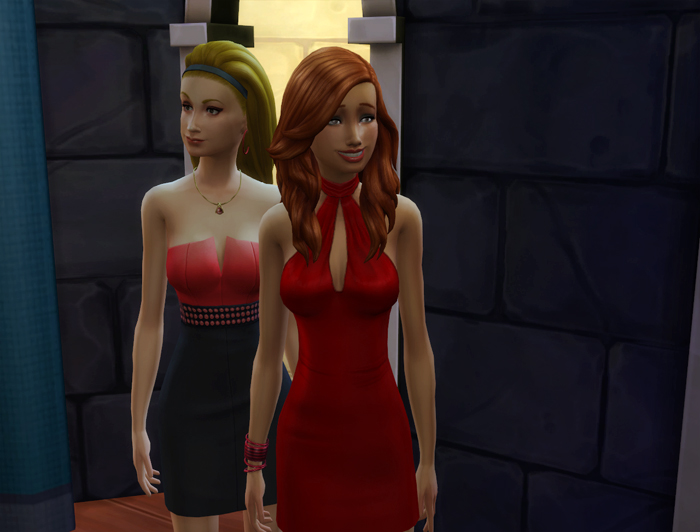 Kristi elbowed me. "Look, Kellie, there's your Finn sitting at the bar."

My Finn? Then I remembered telling Kristi I had a thing for him. "Oh."

We went to say hi to Finn.

Kristi next to me rolled her eyes.

"Have you seen Chris?" I asked. 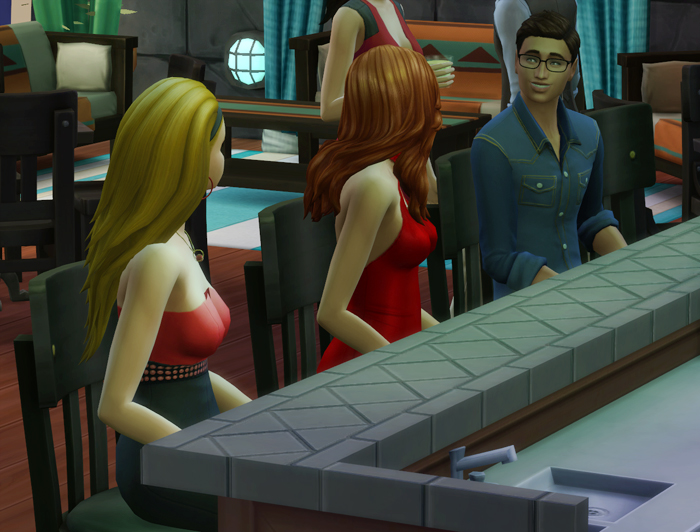 "You know what?" Kristi said, "You two order a drink for me, while I go look around for our dearest club leader." She winked at me.
​
Traitor! I mouthed at her. 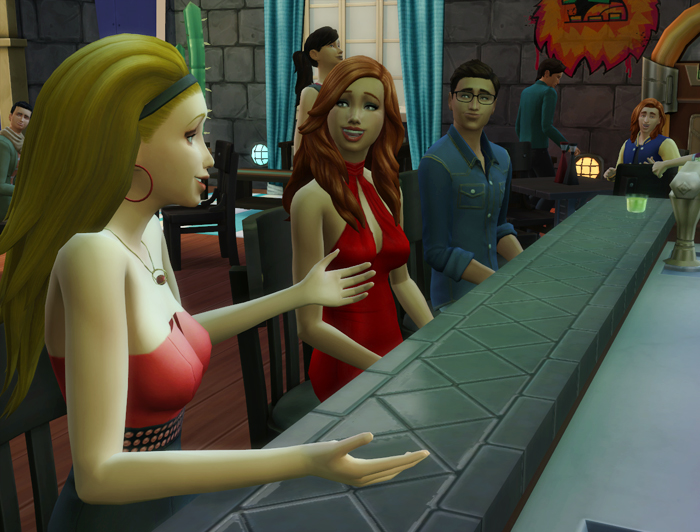 While I waited for Kristi to come back, Finn told me about the exhibition of Rembrandt van Sim's paintings he had visited. Finn was very much into the art. I blushed when he asked me if he could make a painting of myself for his school project.

"Is it going to be one of those naked paintings?" I asked innocently.

It was his turn to blush now. "No! Nothing like that. Not that I didn't want to practice that too with you. Oh... with any model I mean. In general." Then he realized I'm teasing him. "Hey! You can't walk in here dressed like that and ask me questions about naked art. The old Kellie wouldn't do that!"

I frowned. The old Kellie? "There's no old and new Kellie, Finn. I'm still the same me."

"You know what I mean," he said. "You're very distracting now."

Was that a compliment?

"When I'm talking to you, it's hard to pay full attention to what you're saying or not to think of... you know... suggestive remarks. I... I didn't have the same problem with the old Kellie."

I think the old Kellie has just been insulted. Sort of.

Then he looked as if it dawned on him too. "I'm really sorry, Kellie. That came out wrong." His cheeks were red. This conversation wasn't going the way Kristi had probably hoped. Luckily, I didn't actually have a thing for Finn. Otherwise I would have to go and burry myself ten feet under ground after this awkward turn of our conversation. 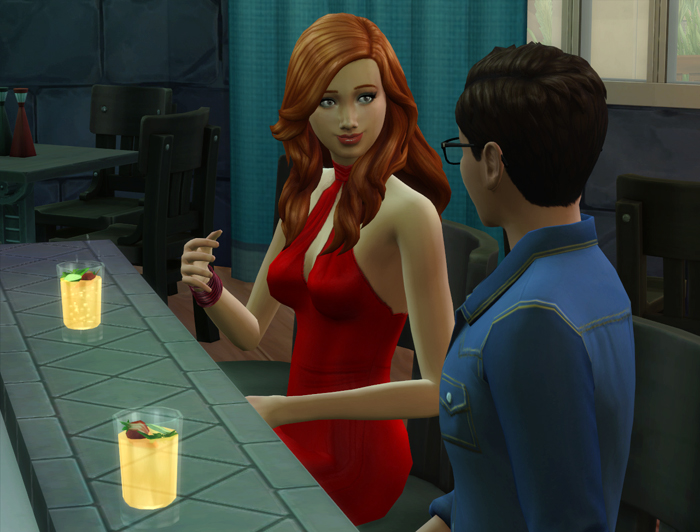 Finn and I were both spared of further torture of each other's company when Kristi finally returned. She didn't look happy at all. Actually she looked as if she'd been crying. I welcomed the opportunity to excuse myself and leave Finn alone at the bar. I dragged Kristi to the gaming area that was surprisingly empty at the moment and where we could talk privately. 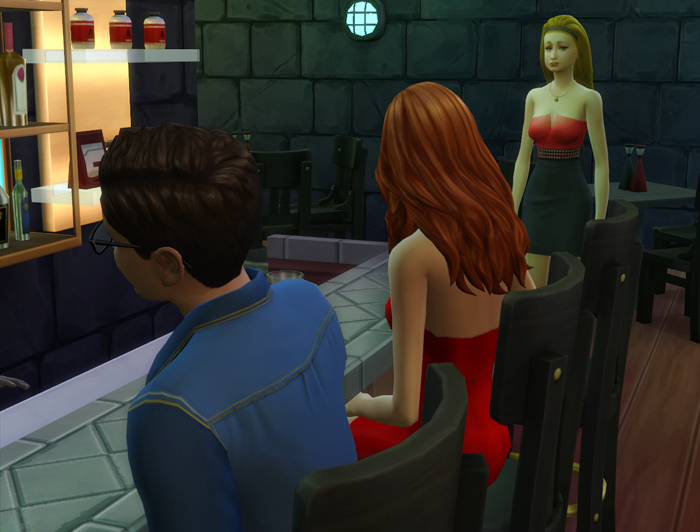 Kristi threw her hands up. "It's too late, Kellie!"

I was confused. "Too late for what?"

"Who got who, Kristi?!" I asked, even though I had my suspicion and I started feeling sick at the thought.

"That bitch Raven!" Kristi cried out. "She got your brother!"
​ 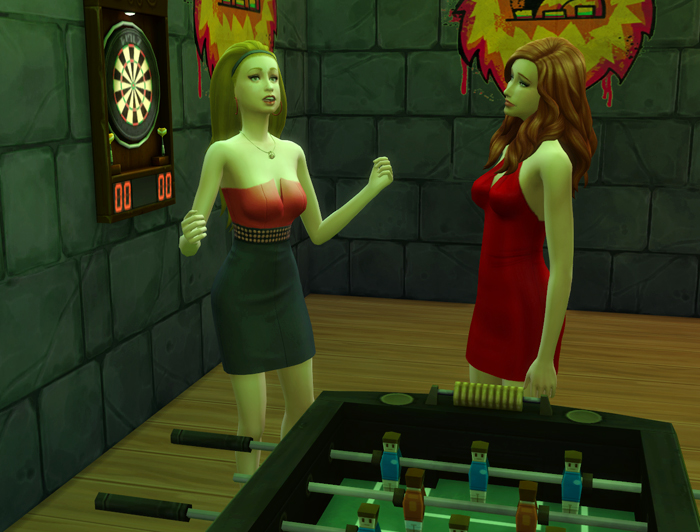 I didn't say anything because I still couldn't believe it. My mind was racing. And what exactly Kristi meant by "she got him"? It could mean absolutely anything from my brother and Raven just talking and laughing, having fun together to... having even more fun together.

Christi must have read the disbelief in my face, because she grabbed my hand. "Come, you need to see it for yourself."

I reluctantly followed Kristi downstairs. And then I did see it myself and I felt like something in me just died at the sight. 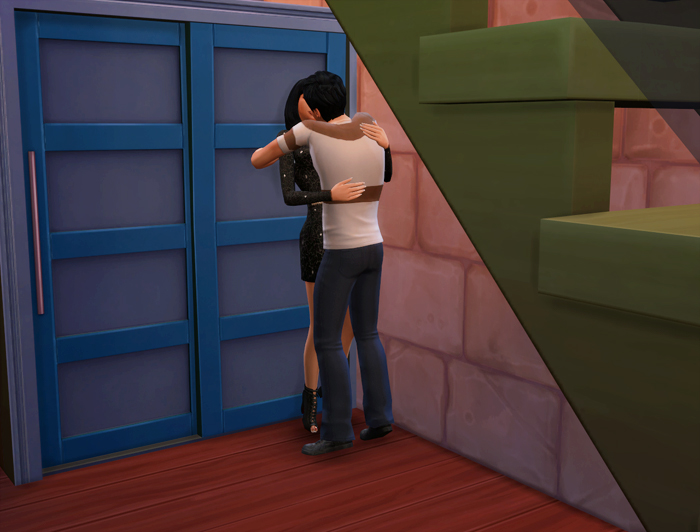