I put my hands under running water diluting the acid that burned my skin when the beaker broke. I have been experiencing too many accidents lately. Actually, it was statistically improbable. It started after the incident with Gabriel and it was only getting worse. 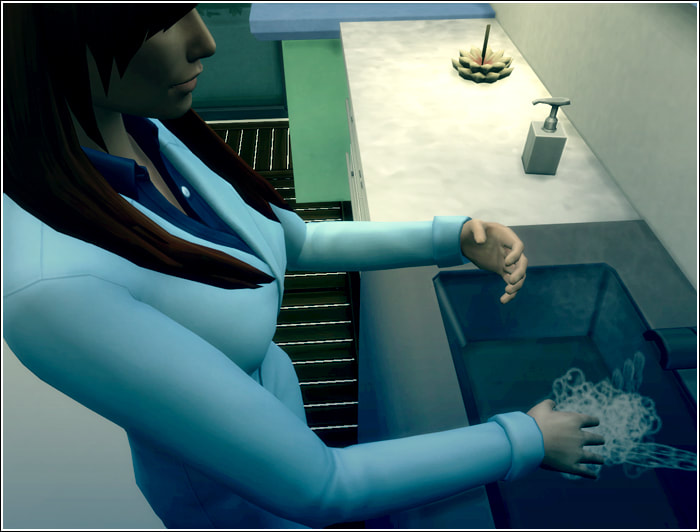 ​I dried my hands. They were still shaking. The skin was slightly red and irritated. It could be much worse, couldn't it, Kellie? You weren't wearing the protective goggles, because you didn't know it was an acid in the beaker. There wasn't supposed to be an acid in it. 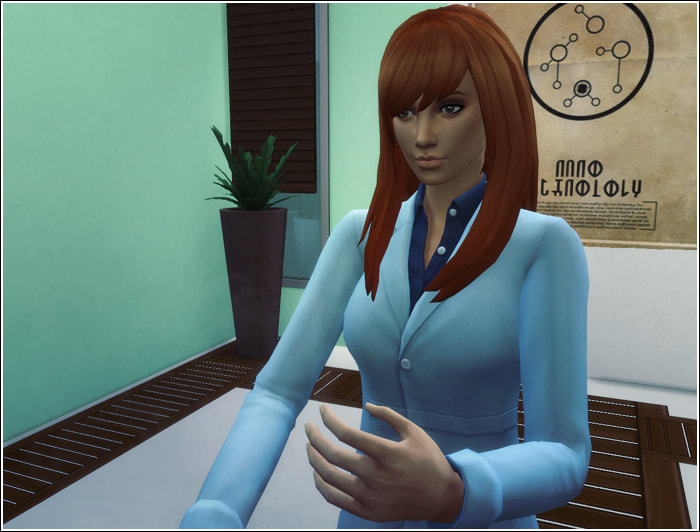 I looked at myself in the mirror. It all felt so surreal. Why was this happening to me? It couldn't be just me being too clumsy. Was Gabriel really responsible for these accidents? Did he hate me now? What is wrong with me? Why can't men be just friends with me? Why do they always demand more? 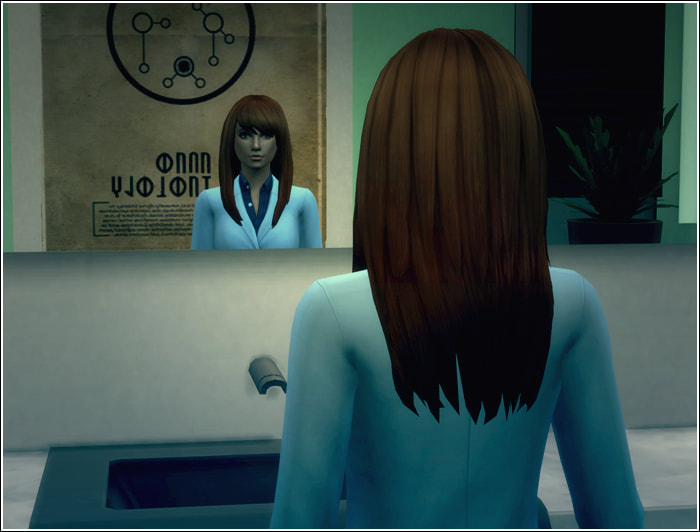 ​I exited the bathroom. I didn't feel like going back to our lab yet and went outside instead. I sat down on the bench and tried to calm down. Instead my thoughts went back to the day when it all started. 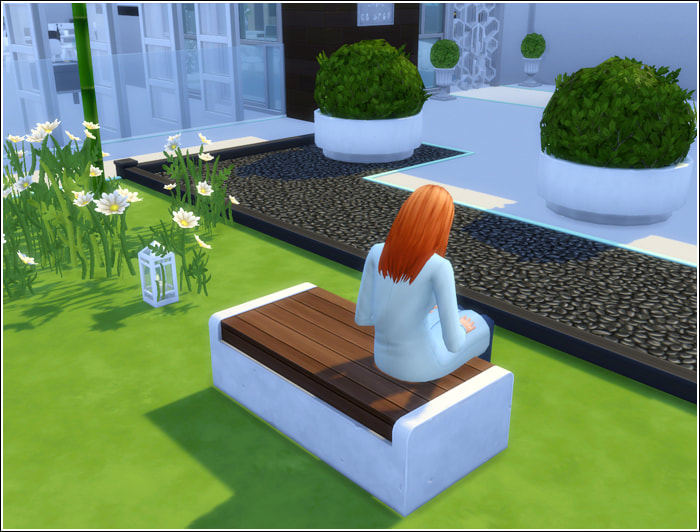 The incident with Gabriel... I had no idea he was interested in me other way than as his colleague. I didn't understand what he was asking of me at first on that day. When the meaning of his words dawned on me, when I realized what he asked me to perform, I felt so embarrassed that I barely managed to stuttered out my rejection.

I keep asking myself if I provoked it somehow. Thomas said it's all Chris' fault. That because of his behaviour Gabriel might have thought I like to have fun too. You lost your only parent and started living on your own too soon without any supervision. People are speculating what is happening in your house, Kellie. Whether Chris is taking all his girlfriends home and what example he sets for you and Celeste. Not to mention what your little sister may accidentally witness, Thomas told me.

"Chris and I would never let anything like it happen! I wouldn't let it happen! Those are awful assumptions! How can they think that? Where did you hear it, anyway?" He only shrugged. Then something terrifying occured to me, "Do you think they could take Celeste away from us because of all the gossip?" I asked.

"I don't know, Kellie, but you really should talk to your brother."

However, the worst thing Thomas did was that he assaulted Gabriel. He was waiting for me outside the lab after work as usual. Gabriel went right behind me that day. Thomas started insulting him, telling him to stop harrassing me. Gabriel was sneering at him which provoked Thomas to attack him physically. 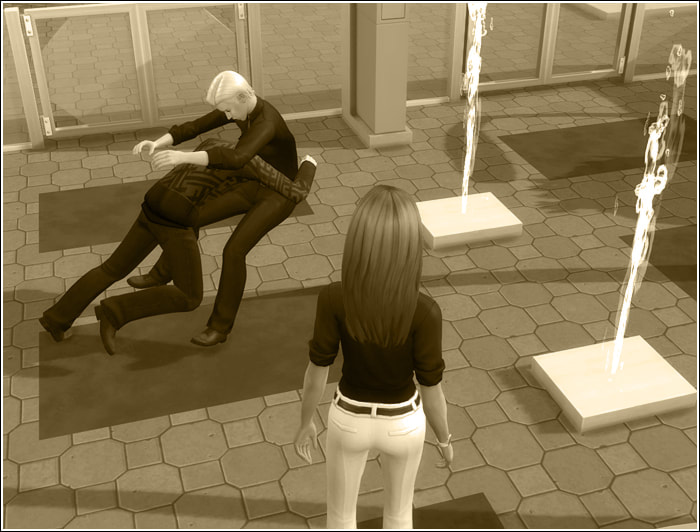 Nothing I did made them stop fighting. Thomas overrated his fitness though. Gabriel subdued him quickly. He got up from Thomas lying on the ground and gave me his sneering look. "You should get yourself a real man, Heffner. One that can defend you better. This one's bark is worse than his bite. See you tomorrow." And with that he was gone, just like that, while Thomas was picking himself from the ground his face all bloody. It was so embarrassing. I was angry at Thomas that he started the fight and at the same time I felt guilty that he got hurt because of me. I wasn't looking forward to the next day at work either. The prospect of having to face Gabriel after the disastrous fight made me feel uneasy. Gabriel didn't come to work the next day though. He called in sick and returned to work two weeks later. I thought all was forgotten, but then the accidents started. 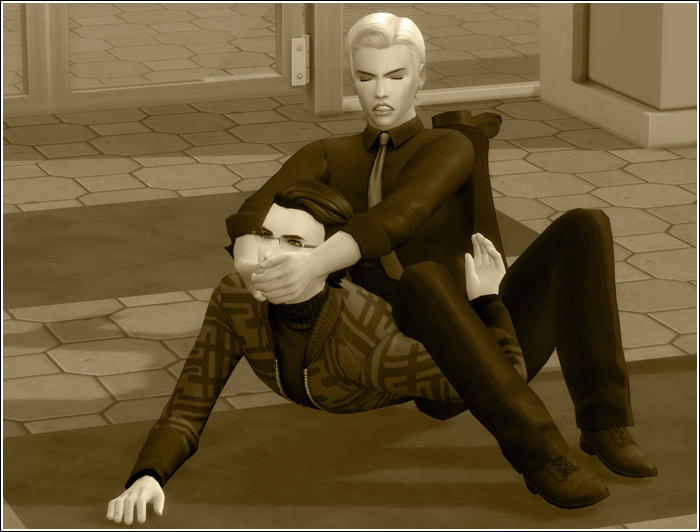 "Hey, are you okay?" A male voice pulled me out of my thoughts. 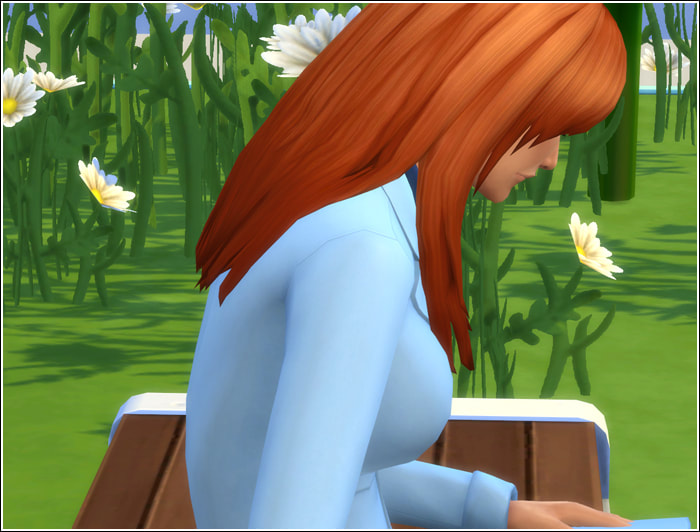 I looked up and saw a man in a lab coat standing over me. I didn't know him, but it was nothing unusual, there were so many people working in the complex, I couldn't know everyone. I wanted to say I was fine, but then I changed my mind. "No, I'm not. My life sucks right now." 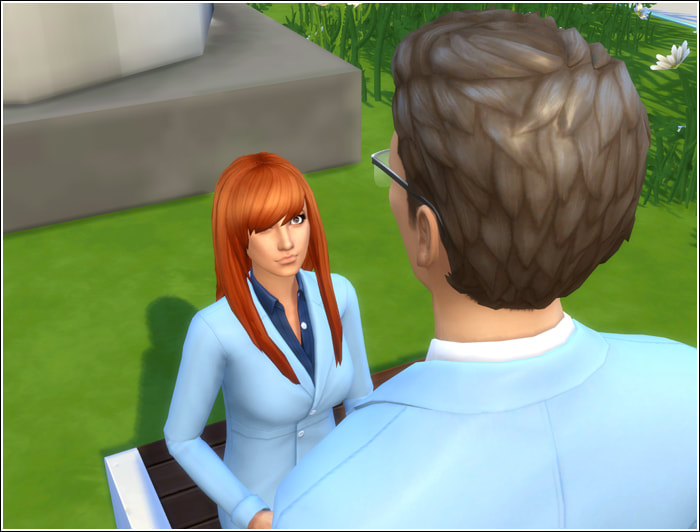 ​He sat down next to me but not too close to make me feel uncomfortable and gave me a sad smile. "No way your life sucks more than mine." He hold out his hand. "I'm Grayson."

I squeezed it and smiled back. "Kellie." I examined him curiously. "How so that your life is more miserable than mine when you work for The Better Future? It's a dream job!" I said with a hint of irony in my voice.

He chuckled. "I wouldn't know. I already had a dream job, but I made a fatal mistake."

"Oh." I couldn't imagine what he could have done and still get accepted to the Better Future after that.

"I started dating my boss."

"Yup. It didn't end well. He couldn't get over his ex and I was caught in the middle of it. Of course he got back with him. As much as I loved my job I couldn't stay there anymore. The other guy was a celebrity atop of that, so anytime I opened a magazine or turned on the tv I saw both their faces. It was just too painful for me. Your turn now."

That really sucked. I felt sorry for him. "Well, where should I start? Oh yes, first I was adopted..." I went on until I got to the recent stuff, Gabriel and the accidents.!

"Fine. You win." Grayson said holding up his hands in a gesture of surrender. 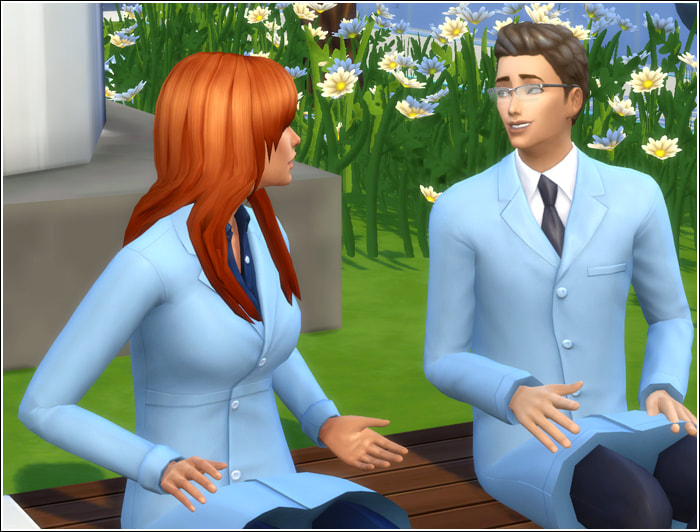 "Wait, I haven't finished yet."

His eyebrows shot up. "Oh, there's more?"
​
"Yes." I haven't told about this to anyone yet, I wasn't even sure I wasn't imagining things, but once I started unloading all my personal crap I couldn't stop. "I think I'm being followed. I caught a glimpse of a tall man several times when I was on my way home from work."

Grayson frowned. "That's serious, Kellie. You should go to the police."

"I'm not sure I really saw him. I don't even know why I'm telling you this. You must think I'm paranoid."

"That's... really nice of you. Why are you being so nice to me anyway?" 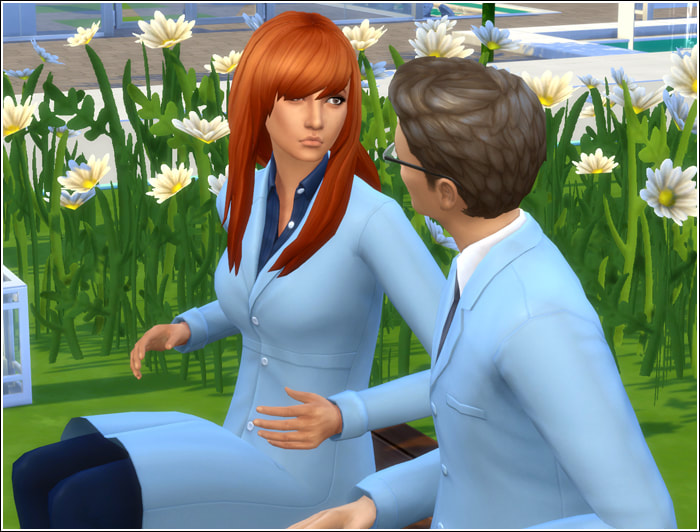 He shrugged. "I saw you sitting here looking sad and lonely, just like I've been feeling in this work and this town. I thought we both could use a friend. Am I right, Kellie? Do you need a friend?" 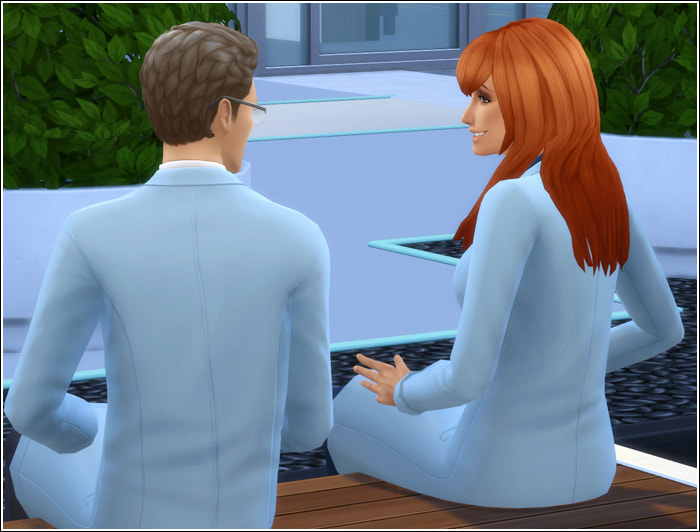 "Your last report was less detailed than what I had expected from you, Thomas," my father said when we finished looking through statement of production costs for last month. "You look absent-minded very often these days. What is going on with you? Is it the girlfriend of yours? Are you sure she's the right woman for you? Her family seems to be quite... problematic. I'm not very keen on the idea of their family merging with ours to be honest." 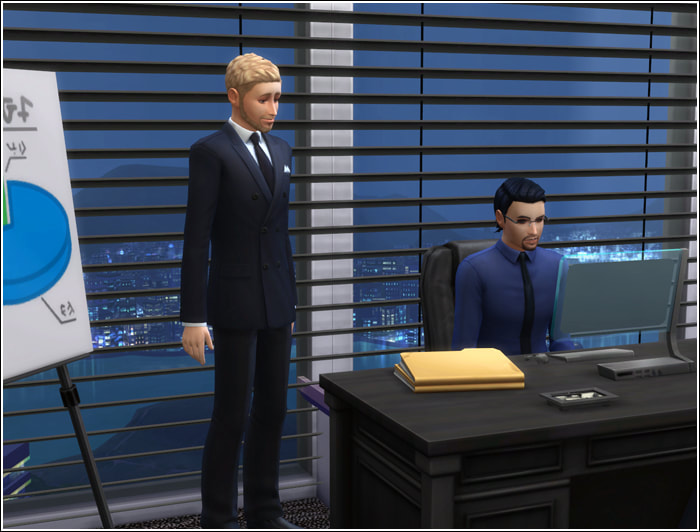 ​
"Everything is fine with Kellie! And her family is respectable enough!" I snapped. 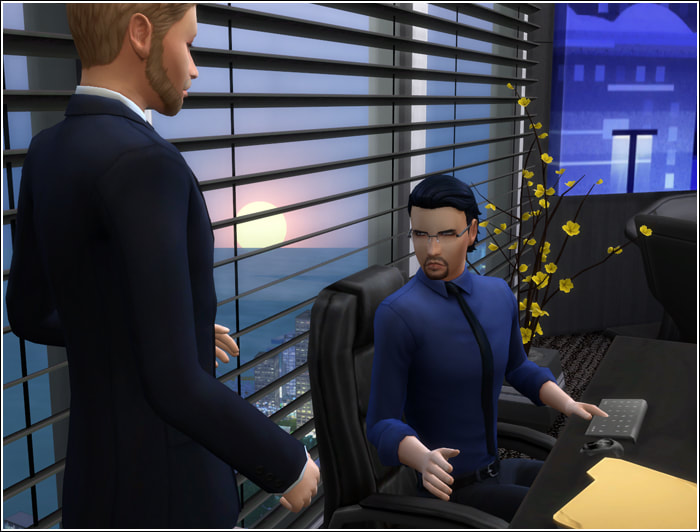 "Don't use that tone with me, Thomas. I was merely stating the facts. Respectable is not the word I hear in the city council meetings at the ocassions when the Heffners are discussed. They are associated with criminals and that's the last thing our business needs! I hoped you're smart enough to realize that." 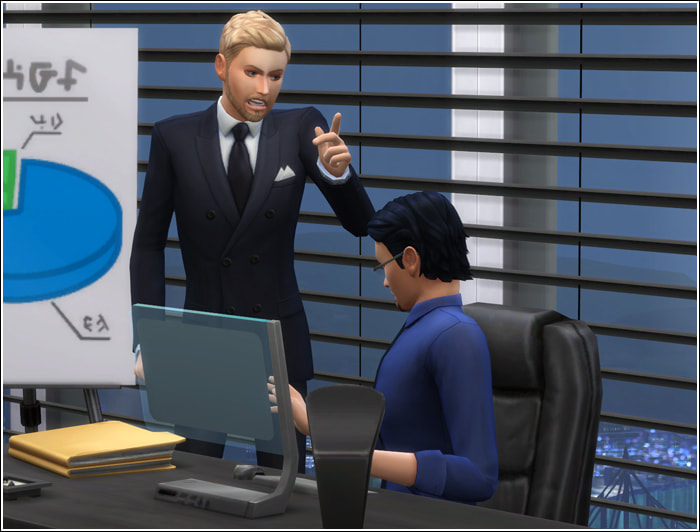 After I have recently learned all details of our family business I had to smirk inwardly at my father's worries. Yes, we didn't need to be associated with criminals when we were doing our share of illegal. Like the last secret shipment of targeting devices to Middle East our government most certainly didn't approve.

"So, when do I get to meet this Kellie?" my father asked.

​I was literally saved by the bell from answering when my assistant Sarah announced that my 15:00 appointment has arrived.

My father took it as a cue to leave, "We'll continue our discussion at another time, son. Business comes first. Always."

​I and especially my sister remembered times when this wasn't true. The family used to come first to our father, but it was long time ago. Back then when our mother was still alive. 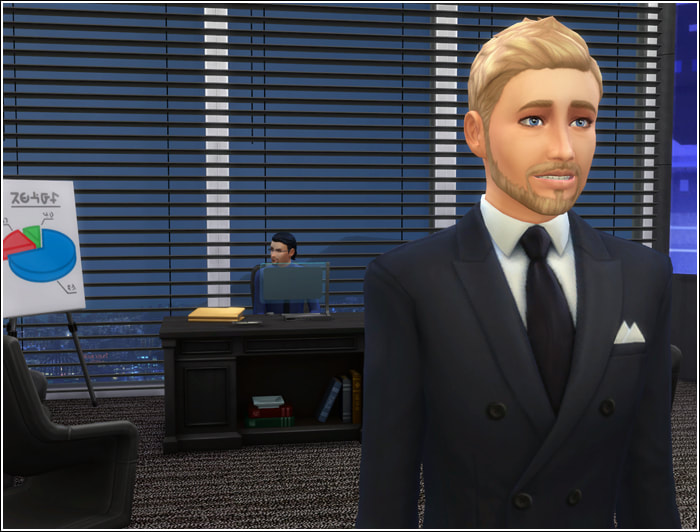 "Sarah," I called my assistant, "Send our guest in."

​"Miss Alex Dark, Mr. Nightshade," Sarah announced as she ushered an attractive brunette in my office. I got up to meet her.

"May I offer you a coffee or tea?" Sarah asked.

"No, thank you, the other woman said.

"For me neither. That will be all for now, Sarah, thank you. Please, make sure that me and miss Dark are not disturbed." 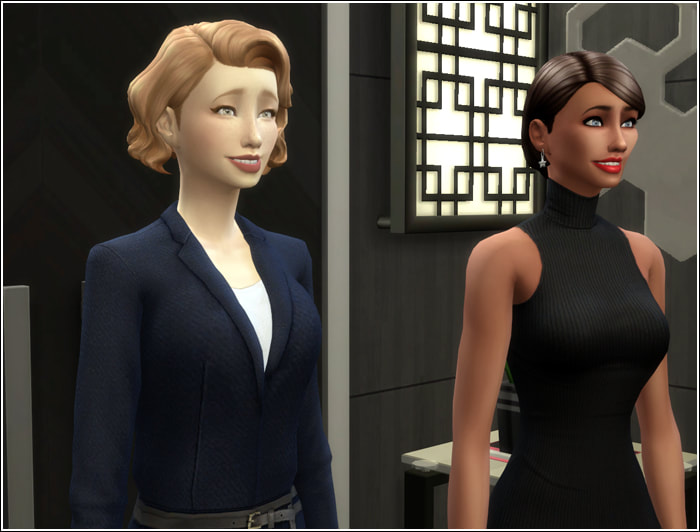 When we seated ourselves, miss Dark didn't waste any time and went straight to the point. ​"As I understand it Nightshade Electronic Systems want to buy several pieces of art from our gallery in order to decorate your premises."

"Mr. Nightshade, I represent several renowned artists, Shayienne Hausberg among others. And let me tell you that having their works placed as a decoration in the halls of some company is not their idea of how their paintings and sculptures should be displayed and admired. Believe it or not some of them were actually offended by your offer."

I was surprised. "But why? It is not uncommon for companies to buy art from galleries. Many of our business partners are great admirers of art so there's no need to worry about the works of your artists not being appreciated enough. Also our financial offer was quite generous. Are you sure you can't convince them to reconsider?" 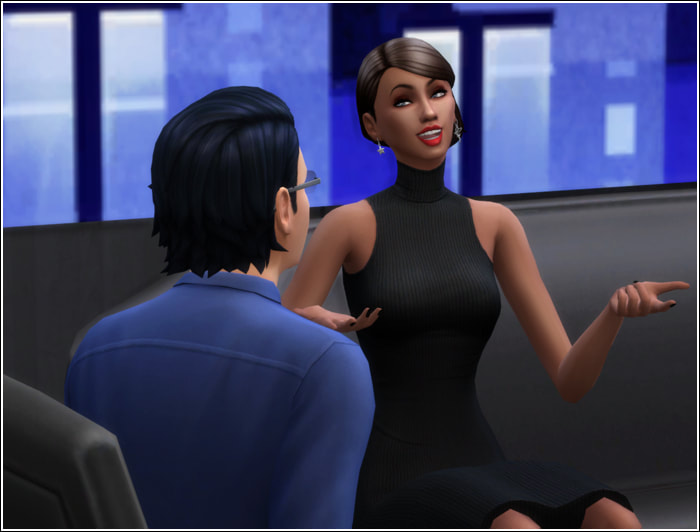 Alex Dark crossed her legs and gave me a wide smile. "Maybe I can," she said. "But first you have to convince me, Mr. Nightshade."

I blinked. What did she want? More money? I looked at her. She was watching me, smiling almost seductively. Wait a minute. Not almost. But why would she be trying to seduce me? Come on, Thomas. One day this company is going to be all yours. That itself makes you very attractive. And you're not ugly either. You only forgot that you're a real catch because of Kellie. 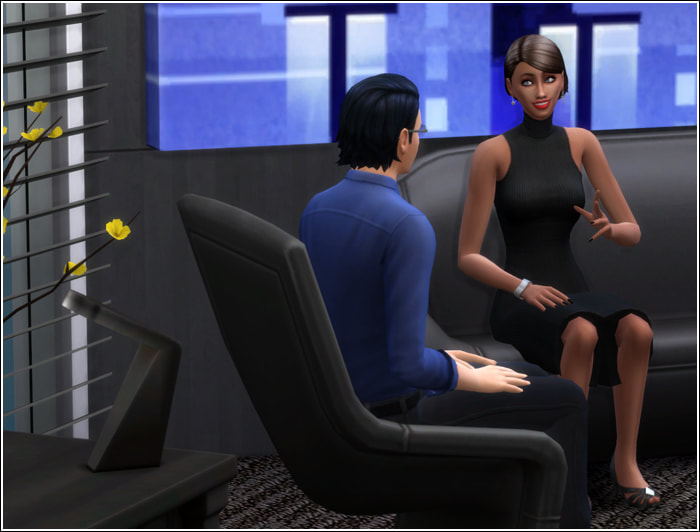 ​I looked at Alex with new eyes and suddenly I could see the signals her body was sending. Her eyes fixed on me, lips slightly parted, the way she tucked the stray strand of hair behind her ear revealing the inner side of her wrist... I felt my nostrils flaring. Being actually desired was so refreshing, so electrifying after all the time with Kellie who didn't give a damn.

"I'm willing to do anything to convince you and get what I want, Miss Dark," I said.

"Good. Looks like we have something in common, Mr. Nightshade."

​Alex Dark was an extraordinary woman and needed a lot of convincing. 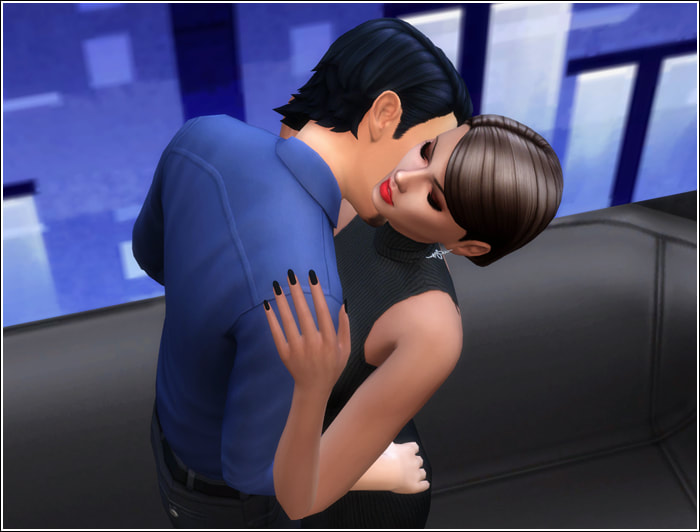 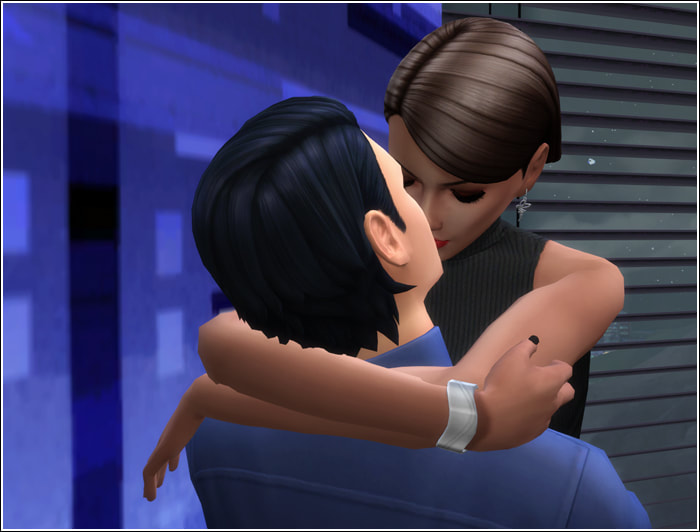 ​*  *  *  *  *
Chris
It took me some time to come to a decision, but when I finally did, it sounded so simple and logical that I had to wonder why I hadn't thought of it sooner. So here I was again in the chief's office. He didn't look very happy to see me, he probably excpected I was there for yet another argument. He looked at me and sighed, "What is it, Heffner?"

I took a deep breath. "I think I may have found a solution to the situation with my promotion, sir," I said. "You question my loyalty. What if I helped our people catch Tony Corleonesi? Would that convince you and everyone of my loyalty? Would I be eligible for promotion then?"

The chief rose from his chair. "You know where he's hiding? It is your duty to report it!" 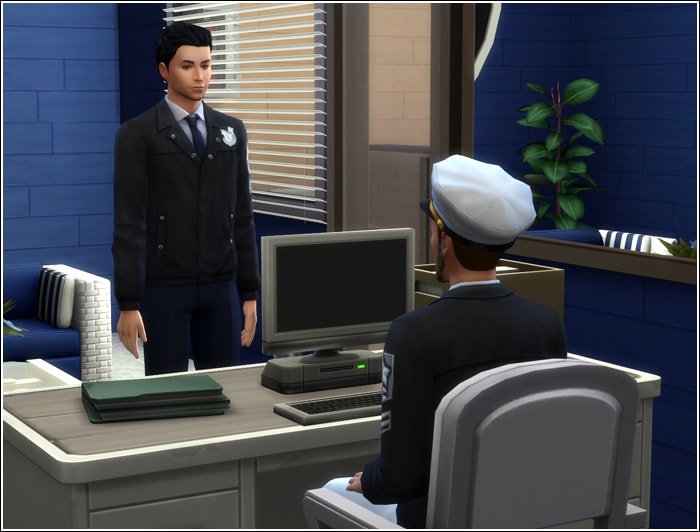 "No sir, I have no idea where he's hiding. But I believe I know a way how to lure him out. If I do it, I want full recognition, including my career advancement enabled." 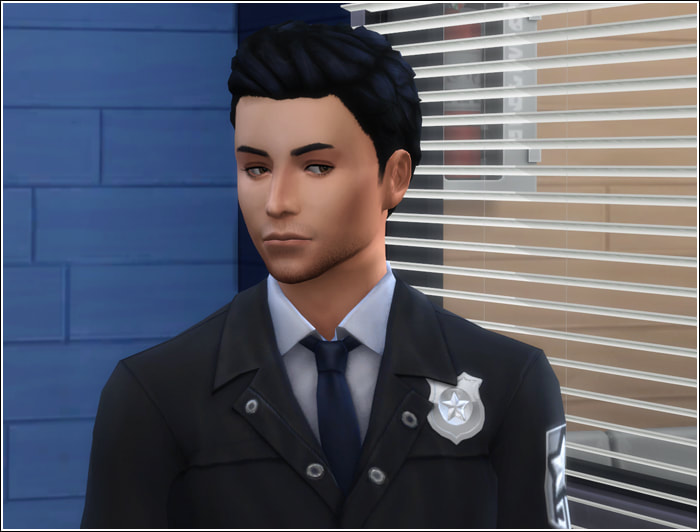