​Even the largest avalanche is triggered by small things.
- Vernor Vinge
3.19 Seeking allies
Author's note: This part of the story is set shortly after the events of the fundraiser in Castelli residence.

After his daughter was humiliated by Tony Corleonesi, Michael's days and nights were filled with frenzied activity. Instead of consoling Marissa, he did what he knew best - gather information. He didn't delude himself into believing he's capable of taking out Tony on his own. However, he would more than happily watch someone else doing it. So he started digging until he found someone who could do his work for him, if properly motivated. 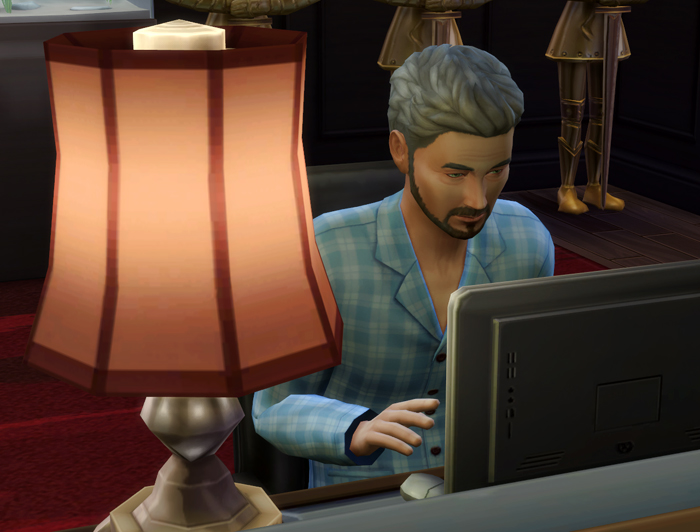 One day he made a long trip to meet this someone. This person had every reason to hate Tony Corleonesi and yearn for revenge.

"It's a pleasure to finally meet you, Mr. Pruett." 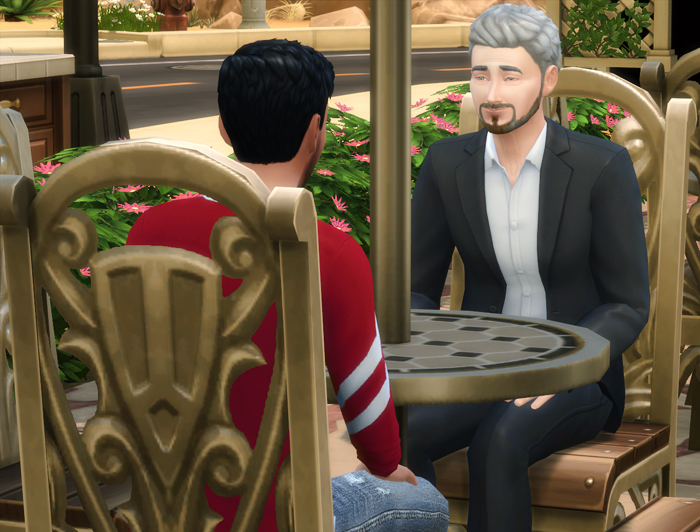 The young man in front of him looked somewhat puzzled. "I have to admit your letter piqued my curiosity, Mr. Castelli. What is this important matter you only wanted to discuss with me in person?"

"From what I've gathered you're familiar with the name Tony Corleonesi, is that correct?" 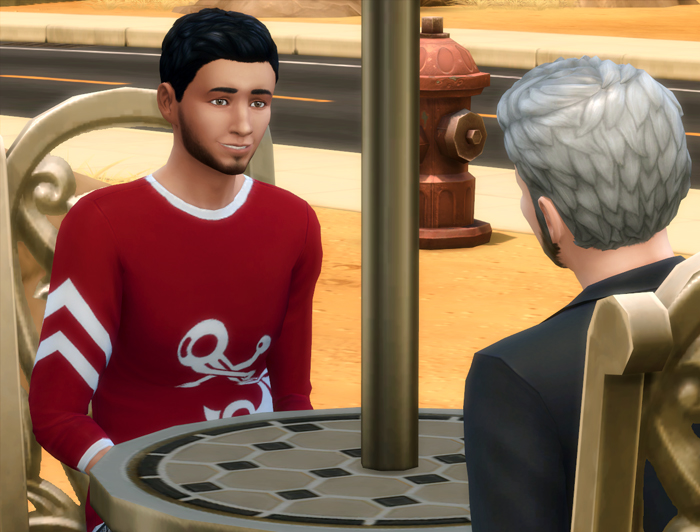 Anger and sadness flashed across the young man's face. "Yes. I used to call that man my best friend."

"Let me tell you something about myself, Mr. Pruett. I come from a legacy family just like you. When I met Tony Corleonesi, he told me he didn't know anything about legacy families. Imagine my surprise when I learned what he did to you. Anyway, at the time when we became business partners and I started relying on him, he wasn't having any family, let alone a legacy one, though he seemed to have the resources. I wonder what he was doing in the meantime. Maybe you could shed some light on it."
​ 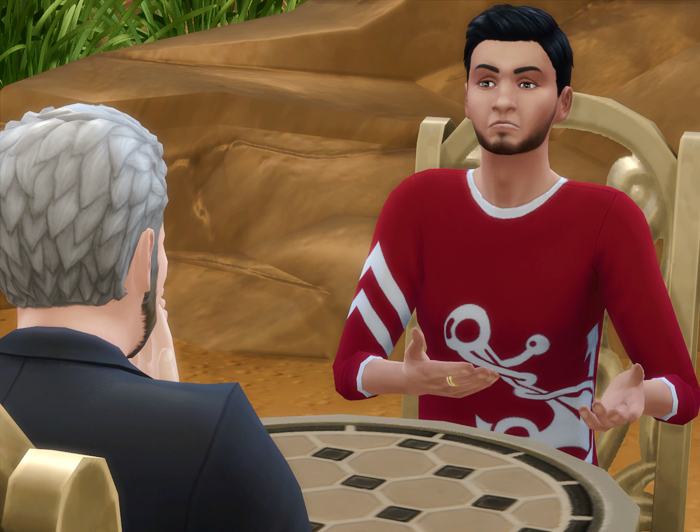 ﻿
"I'm sorry. When all those things happened, me and my wife were dependent on my sisters' money before we could start a normal life again. I wished I could send an army of lawyers after Tony, but we were literally struggling for survival at the time. Then our first baby was born and I pushed all thoughts of Tony away. I had more important things to do than wage war against him with no money to spare. I have no idea what he did after our last meeting.
I gather you have a score to settle with him as well. What did he do to you, Mr. Castelli? "

Michael cleared his throat and furrowed his forehead. "We were doing a business together and then he didn't honour our deal. He went behind my back and delivered a certain antique piece I was interested in to someone else. He lied to my face about it. I even wanted my daughter to marry him! But instead he broke her heart, humiliated her in front of our family friends and impregnated another woman."

"Yes, I remember he had a way of sweeping girls off their feet."
​ 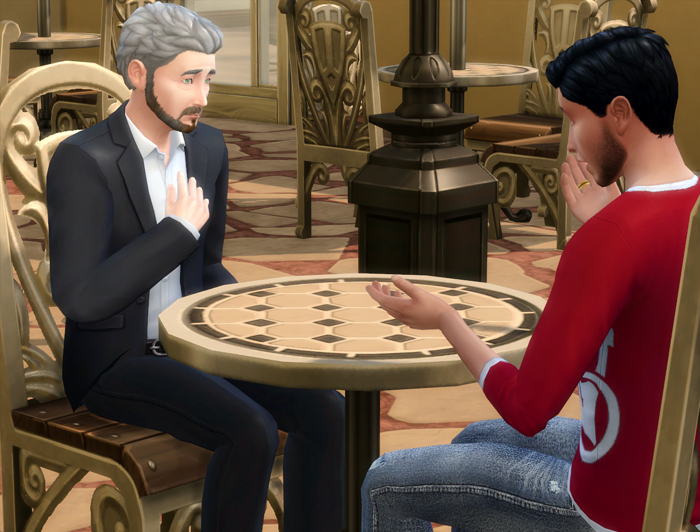 "So we both agree that Tony Corleonesi is a despicable character and needs to be stopped, right?"

"What if I offered you the means to get even with Tony?"

The younger man frowned and gave him a suspicious look. "I don't think I like the sound of that. With the resources you're talking about, why don't you do it yourself? What do you need me for?"

Michael realized he got carried away. "I'm a very old man, Mr. Pruett. I don't have much time left on this world. I might not be able to finish the job." 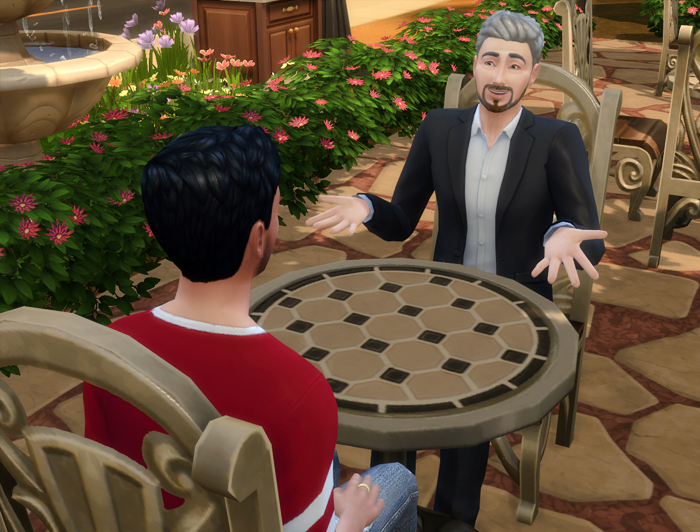 "What does your daughter thinks about your plan?"

"She... um... she doesn't know. She left me. We didn't part on good terms, after the situation with Tony," Michael admitted reluctantly. The conversation took a wrong turn.﻿

The younger man stood up. "Mr. Castelli, let me tell you something now. After what had happened to my heritage I realized something important: As long as your family stands by you, you've got everything. You don't need anything else to be happy. Go and give your daughter a call. Forget Tony and make it up with her. You say you don't have much time left. Spend it with your family." 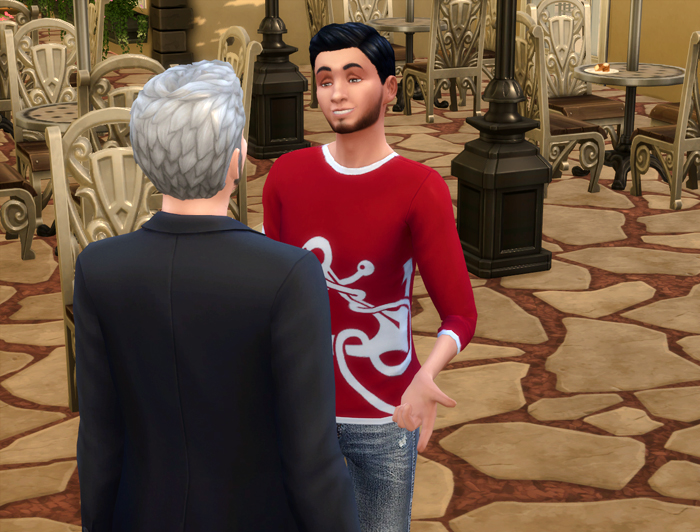 ​
Jonathan Pruett, the man Michael was pinning his hopes on, pulled a phone out of his pocket. "Let me show you mine," he said browsing through pictures of children faces that meant nothing to Michael. "This is our oldest, Maya, when she was just a little kid. Here are the twins, Benjamin and Adrian, and here is our youngest, Victoria."

"Uh-huh," Michael said doing his best to remain calm and not grind his teeth. "They look quite... cuddly."

Next ten minutes he had to look at pictures of half of the Pruett clan. He was really happy when he could say goodbye. This trip turned out a waste of his time. Fortunately, he had one more person to visit. 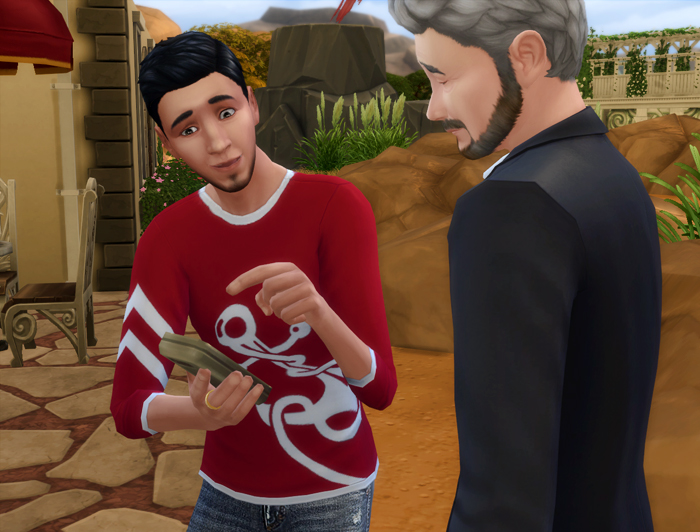 It was an early evening when he rang the doorbell of a lavish residence in Oasis Springs.
​ 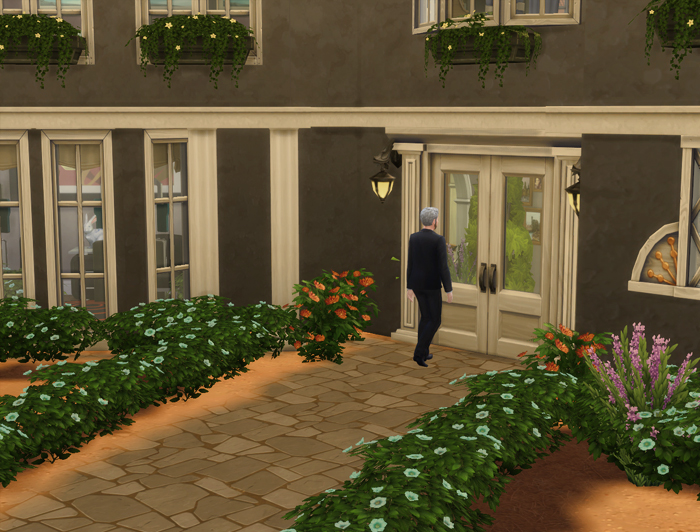 A young man came to answer the door.

The boy turned around and shouted, "Dad!" 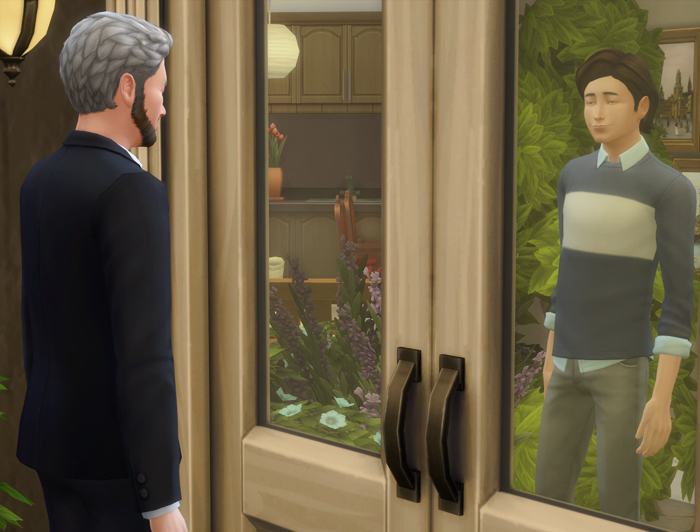 A white-haired man appeared in the door. He looked at Michael questioningly. "What can I do for you, Mr?" he asked.

"Castelli. Michael Castelli. The thing is, Mr. Lien, I think I can do something for you. May I come in? I've brought you something." 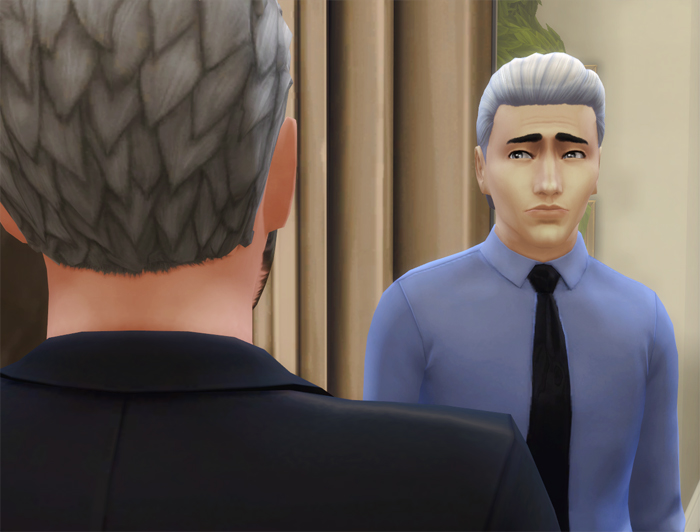 Mr. Lien led Michael into the living room where his son was practicing the piano. He motioned to the sofa. Before sitting down Michael pulled an urn from a bag a put it on the coffee table.

"What's the meaning of this?" Mr. Lien shouted when he saw the urn. "Is this some kind of a sick joke? Take the thing and get out of my house!"

The boy stopped playing the piano and stared at them in shock. Michael raised his hands defensively. 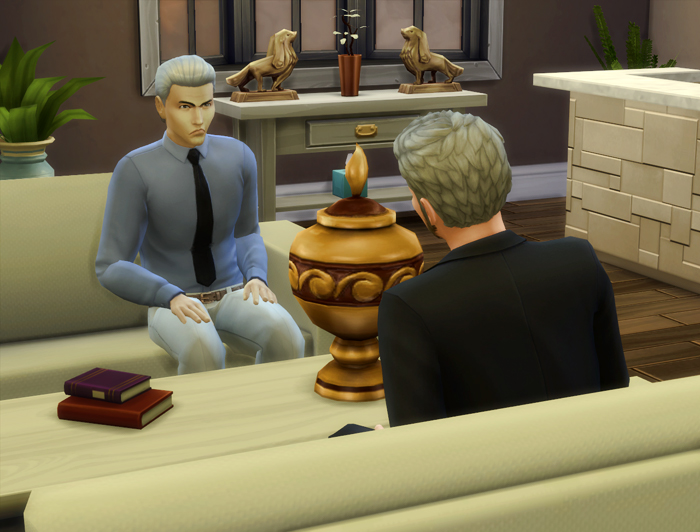 "No, wait! Let me explain! I learned that you're desperately looking for any information on a certain woman's whereabouts. I'm afraid I'd found her. I'm sorry, it was insensitive of me to reveal her remains like that. It's been a long day and I wasn't thinking straight. I apologize."

When his words sunk in, the white-haired man gasped. "No... It can't be." Then he noticed the boy staring at them. "Paul, go to your room, please. I'll talk to you later." When the boy left, both men sat down again. 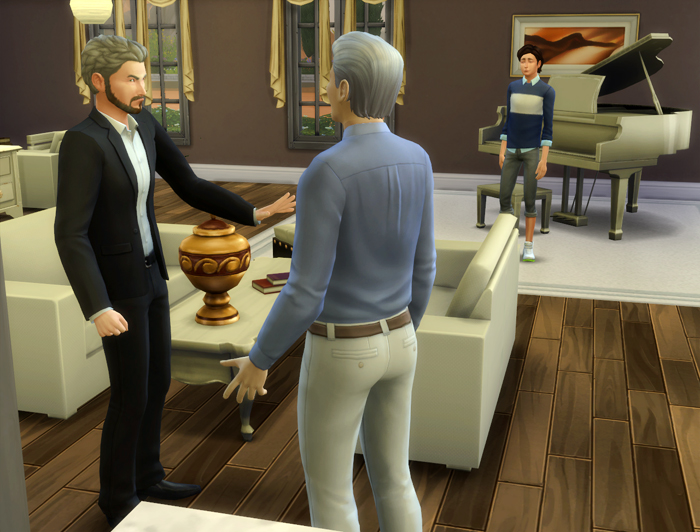 "This can't be her..." Mr. Lien repeated devastated.

"I'm not sure if it is possible to do it yourself after such a long time, but I'm sure with the help of a skilled spiritualist you'll be able to contact the ghost and see with your own eyes it is the woman you'd been looking for," Michael suggested.

This time Michael wanted to do everything right, so he waited patiently for his potential ally to pull himself together. 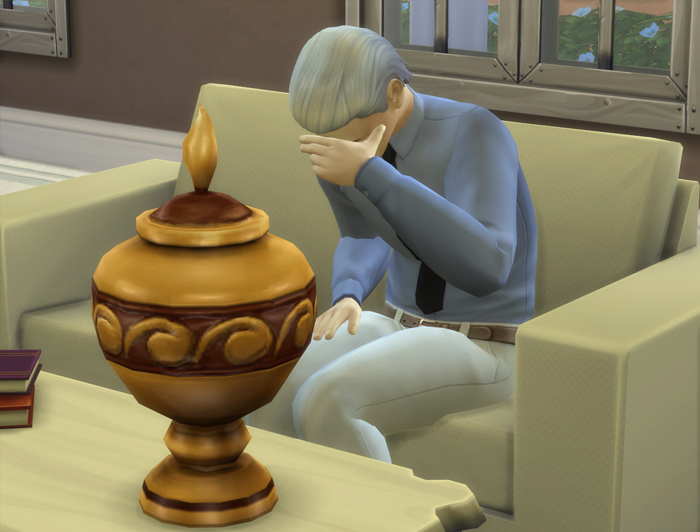 After a moment he did. "I convinced myself that she fled with my money. But I guess deep down I knew something bad happened to her. She wouldn't have left her son. I have raised him as my own since she disappeared."

"I understand she worked for you. I didn't know you were close," Michael said carefully.

"Yes, we were lovers. Do you by any chance know what happened to her?"

Now was the moment. "Oh, I know exactly what happened to her, Mr. Lien. She was murdered."

Mr. Lien fixed his cold eyes at Michael. "Who did it?" he asked.

"But I do, Mr. Lien. Because I have a reason to hate this person as much as you do."

"If you must know then, I will rip the person into pieces. But first I'll return the favour and take everyone this person holds dear away from them."

And that was music to Michael's ears. "Tell me," he said, "Are you familiar with the name Tony Corleonesi?"
​ 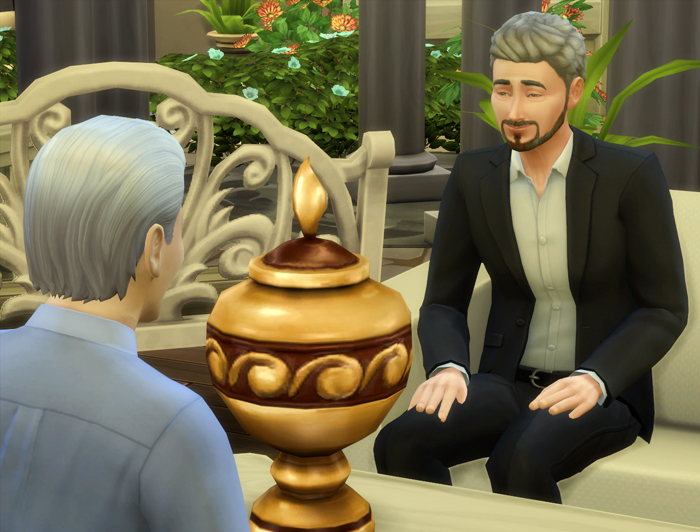