Unlike other guests, Tony Corleonesi entered Castelli Mansion via back door just like he used to, when he had worked with Michael.
He headed straight to the bar. Somewhere along the way he carelessly tossed away his jacket. 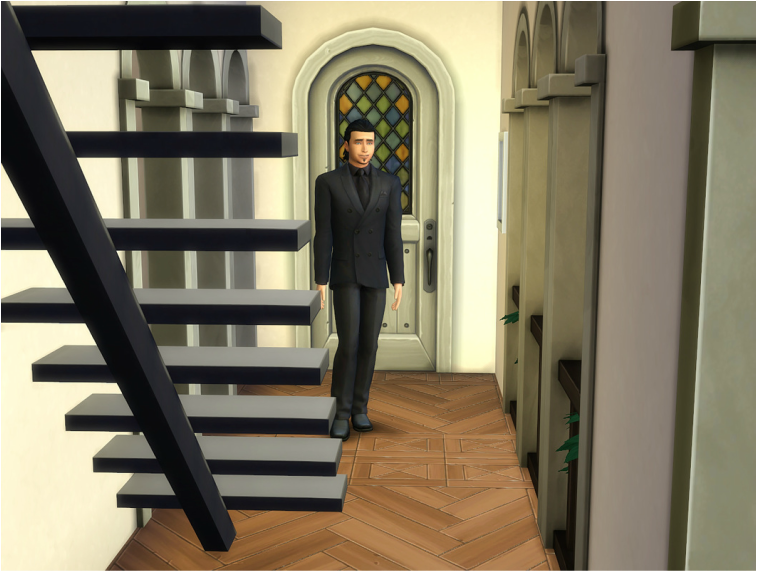 But everything annoyed him there. The bartender was serving drinks too slowly and was texting all the time. Tony was soon in the mood to punch someone hard. Maybe beating the bartender plumless would improve his mood significantly. 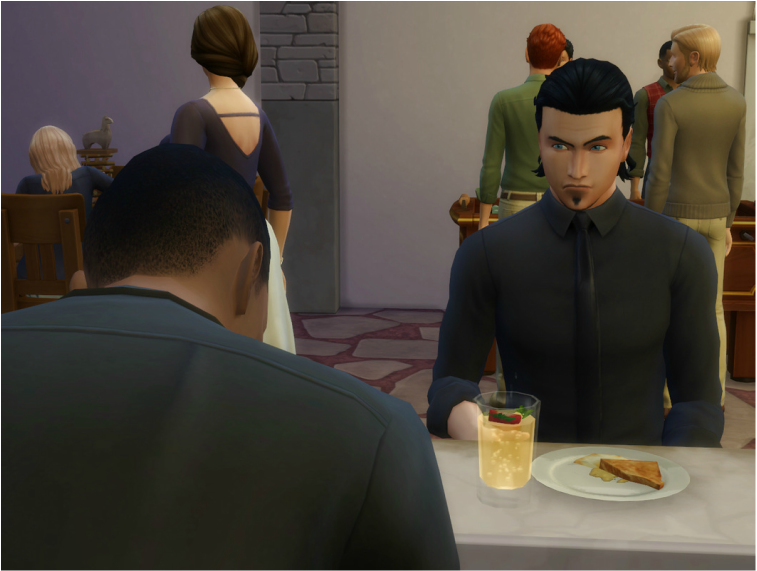 It was too hot in there. The music was too loud. He really needed a job to vent his anger and frustration. He needed to shoot someone, cut someone deep. He was like a hungry animal wanting to burrow its fangs into fresh meet. But thanks to Michael he couldn't for months. And here he was in the house of the man who caused his misery. 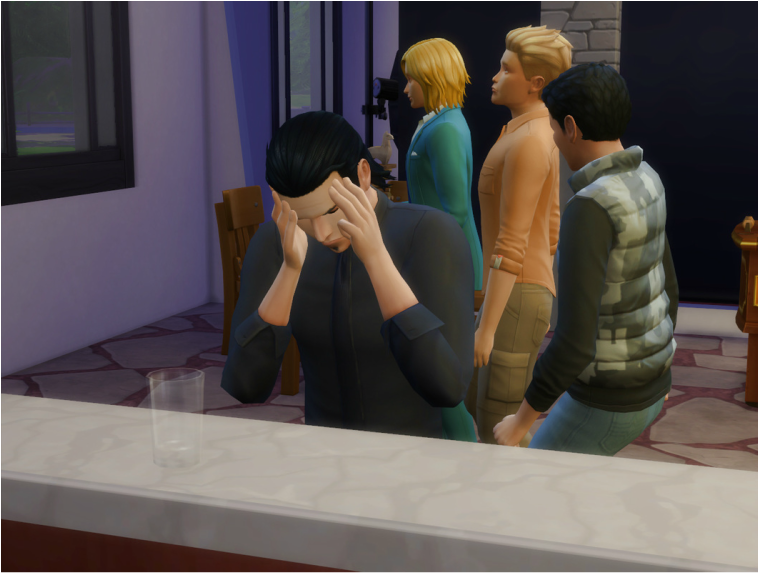 But it was either spending time here with Marissa or with Salome. And reminding himself of what he really wanted but couldn't have wasn't on the top of his self-torture list for today. He texted Marissa and hoped she would find him soon to take his mind off other things. 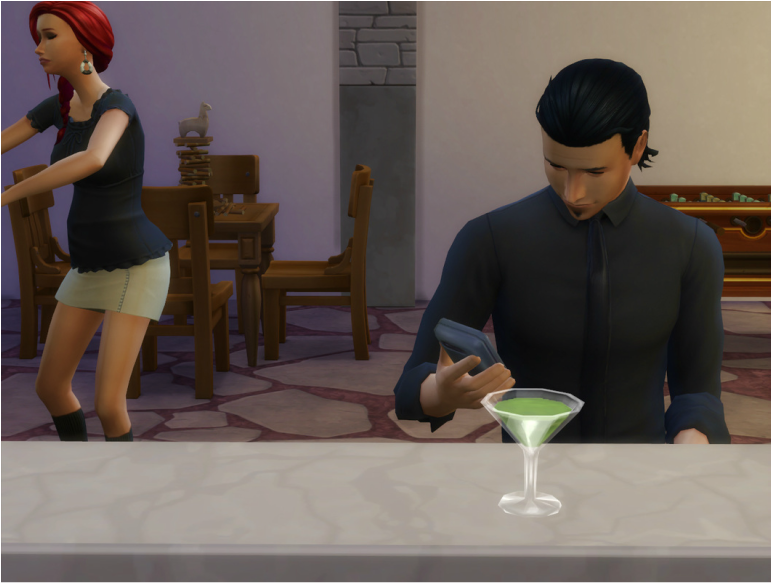 * * *
﻿
​Marissa left the Heffners with Dr. Angel and went to find Tony. She needed to see with her own eyes how much he cared for Beryl Heffner. The information she gathered was confusing. She saw pictures of the kid, it was undeniably his, but Tony evidently showed no interested in his son. What kind of relationship did he have with Beryl? Marissa still wanted Tony badly and was ready to fight for him, but if he loved the other woman, she didn't want to make a fool out of herself.
​
Speaking of the other woman... Marissa couldn't understand what Tony liked about her. She seemed dull to her and looked quite average. Yes, she had pretty big blue eyes, but the rest... Her nose was too big and lips too full. She might move with a certain grace, but any goose could learn that with a little practice. So what quality did she possess, that Marissa didn't? Perhaps when she sees them together, she will figure out what it is between those two, and then she'll be able to decide what next step to take. 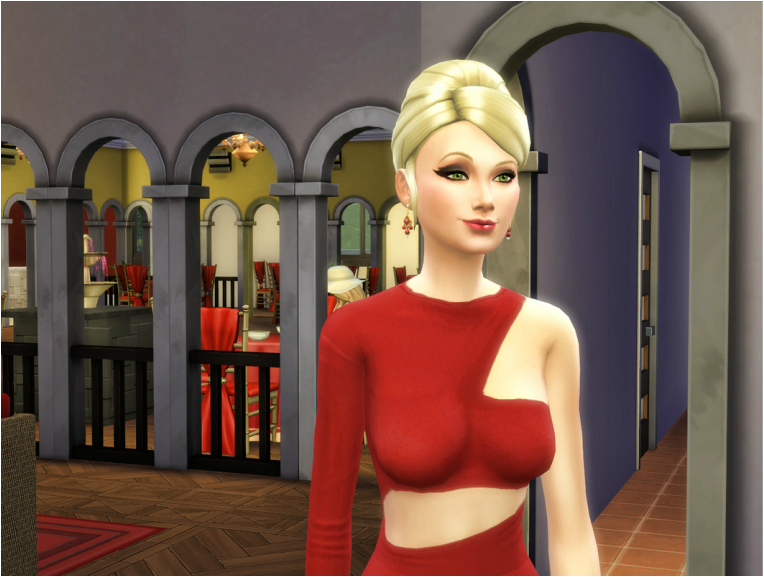 ​Tony texted her he's in the bar, but before that she had to check if everything's alright in the kitchen. The party and guests were top priority. 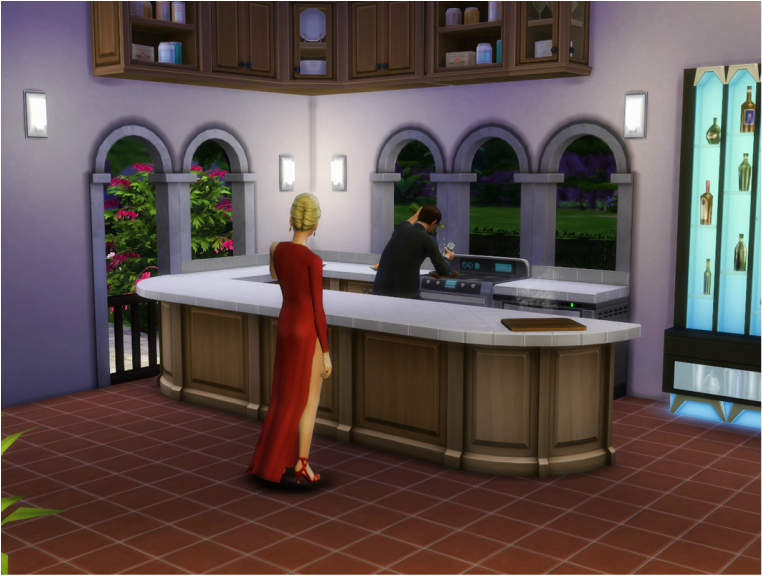 ​Marissa: "Everything okay, Hugo?"
Hugo: "Of course, madam."
Marissa: "Make sure the food on the tables is always fresh. Some of our guests are pretty squeamish. I don't want them to tell their friends the food was stale at our party. Don't leave anything out there for too long."
Hugo: "As you wish, madam."
Marissa: "I have faith in you, Hugo. Don't let me down. I would hate to have to look for a replacement. I know you need the money."
Hugo: "Don't worry, madam. If anything goes wrong, it won't be the food."
Marissa: "That's what I needed to hear from you! Hopefully, everything else goes smoothly too." 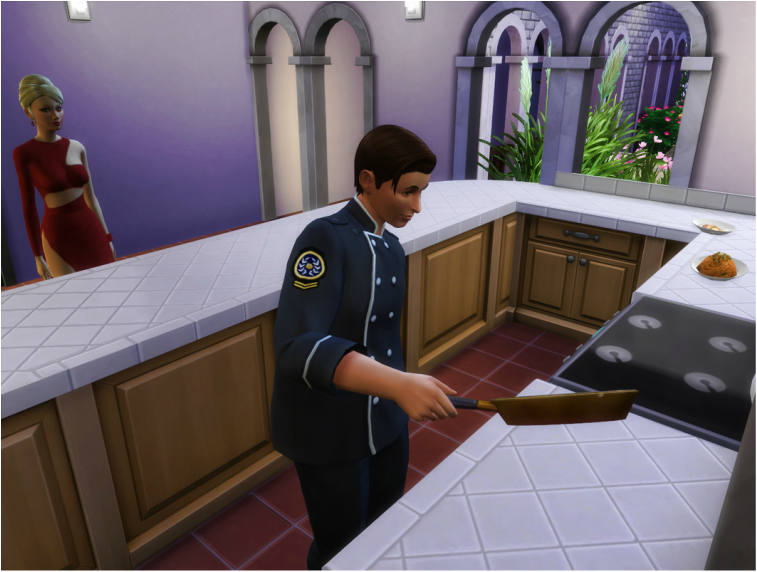 ​When she took care of her duties as a host, it was time to steal a little pleasure for herself.

Marissa: "So this is where you're hiding, Tony."
Tony: "Hello, Marissa." 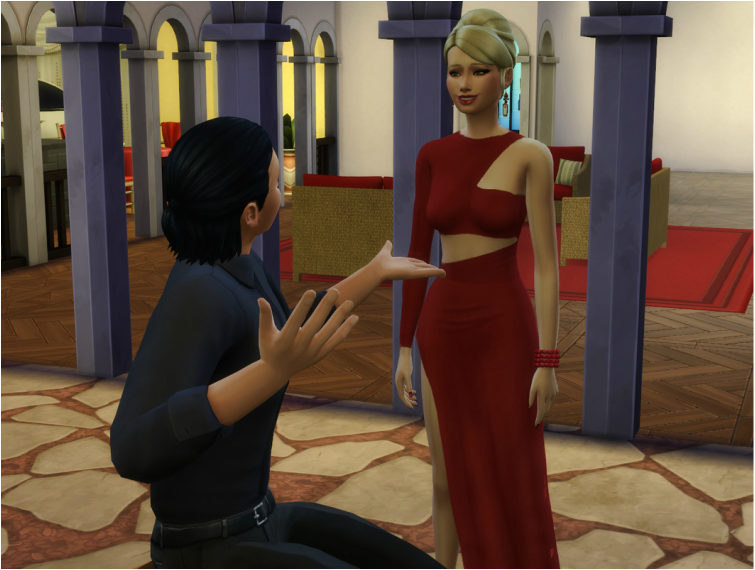 ​Tony: "That's a killer dress you're wearing."
Marissa: "And here I was afraid you wouldn't notice."
Tony: "Hunting for a husband tonight?"
Marissa: "Why? Are you interested? We would make such a lovely couple, Tony."
He dodged her question with a laugh as always.
Tony: "You're too good for me, Marissa."
Marissa: "I'd rather be bad for you. Any suggestions how to accomplish that?"
Tony: "You can't ask me such questions. Your father would have me killed, if I told you. I have no job thanks to him, but at least let me keep my miserable life."

You're good with words, Tony. You've always been. But I don't need words to rock your boat.

Marissa: "Do you have a moment, Tony? I wanted to show you something."
Tony: "Sure."

He was plainly grateful for the change of topic. To Marissa's displeasure. 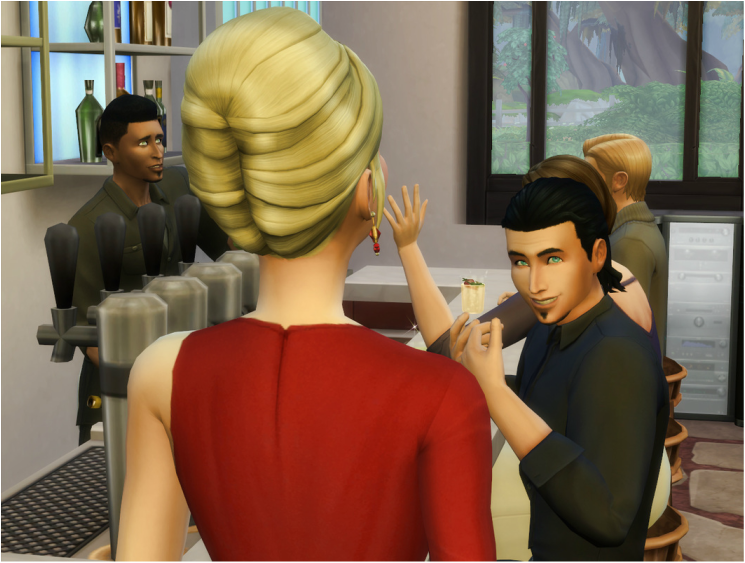 Tony: "What is it then? What did you want me to see?"
Marissa: "Do you know, this is not just some party, right?"
Tony: "Yeah. There was something about raising money on the invitation as far as I remember. So it's a charity. And? You know I'm not much into this stuff. I like my money and not sharing it. Let others spend their money for charities, if they're foolish enough."
Marissa: "Come on, Tony. There must be a piece of a samaritan in you. If only a small one. A little boy who wants to be a hero for somebody? Don't you want to be a hero?"
Tony: "Where have I heard that before? Me playing a hero never ends well, Marissa."
Marissa: "Come on, Tony. Just this once. Let me show you." 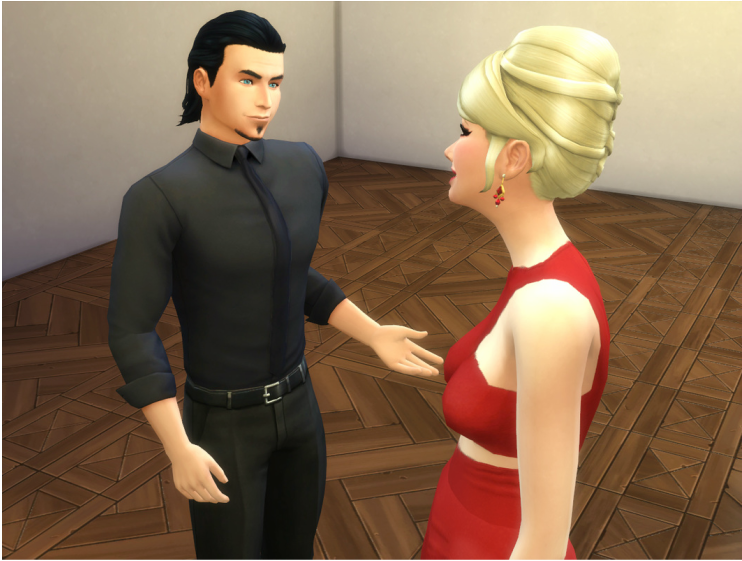 Marissa: "We took photos of all our ladies' guests, me included, and we will auction them. For the money we are going to build an orphanage. I'm sure you like kids, Tony. Never heard you say you didn't.
Tony: "Actually, I do."
Marissa: "Why not do something for them?" 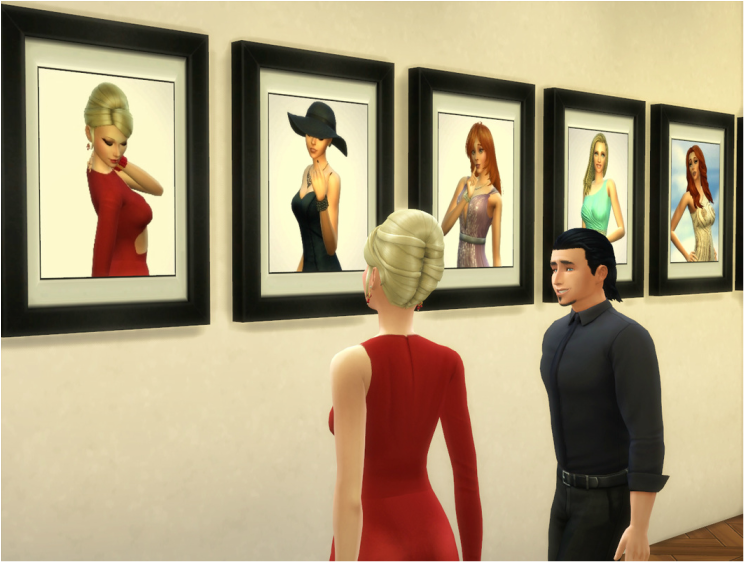 ​Tony: "I know, what's this about, Marissa. You want me to bid at your picture, don't you?"
Marissa: "Well, I'm definitely not discouraging you from it. I'm sure I would make a nice decoration of your living room or maybe even a bedroom."
Tony: "Okay. I'll do it."
Marissa: "You will?"
Tony: "Yes. For the sake of our friendship I'm going to buy and hang your picture in my living room instead of having a proper meal for the next couple of months... or years." 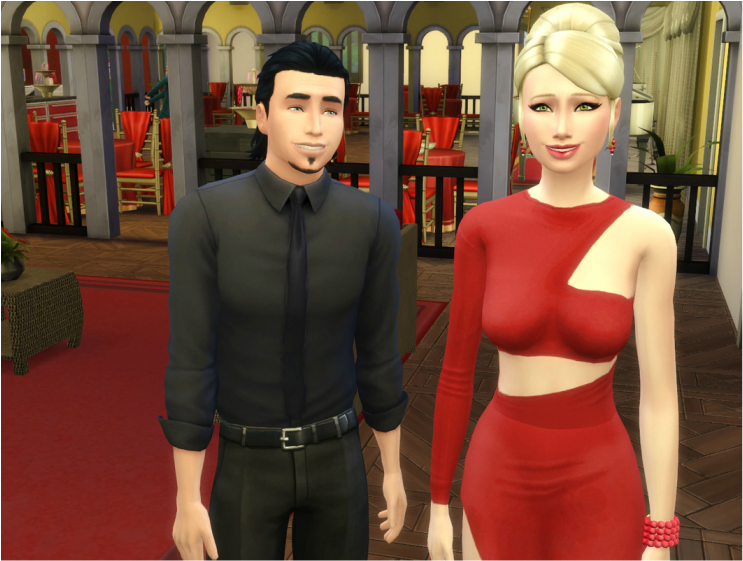 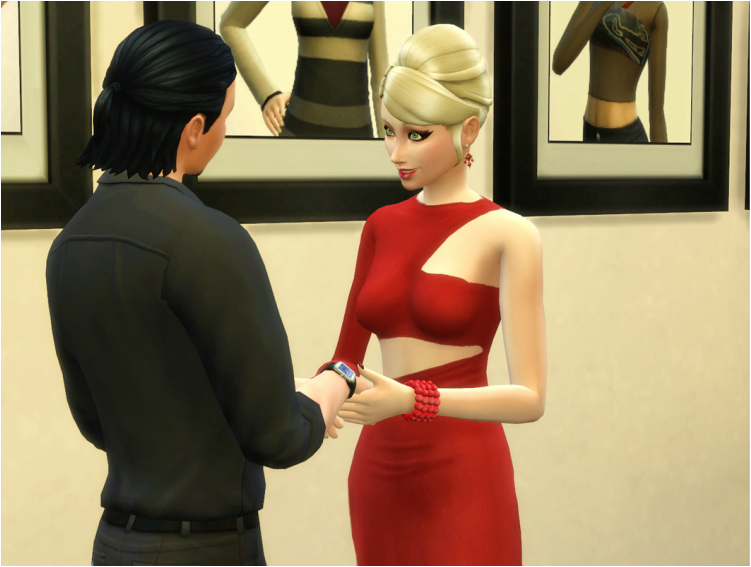 ​And then Tony blinked and his smile faltered.

She cursed herself for the stammer. It was a mistake. She wanted to look confident, but in the face of Tony's sudden anger she realized that stammering wasn't the first mistake she'd made. 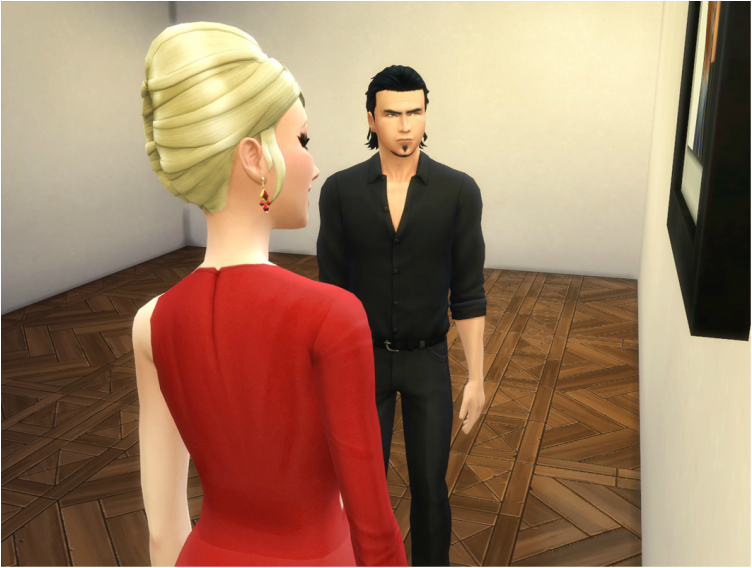 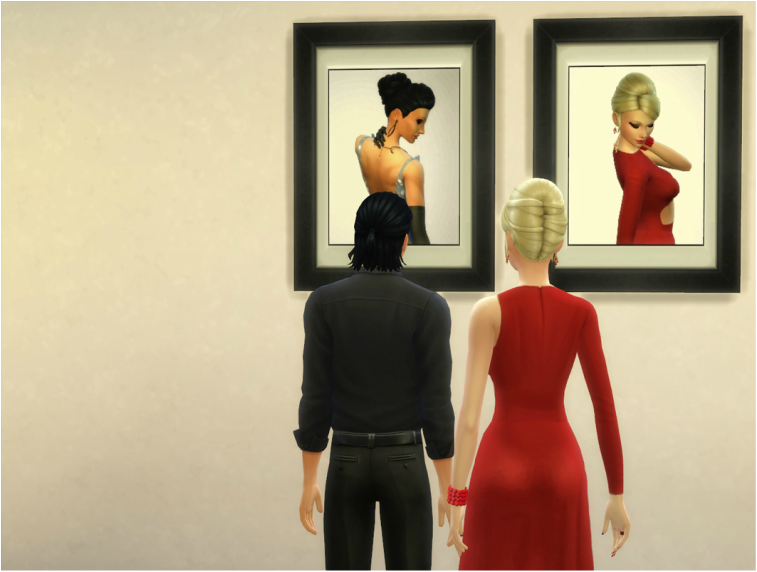 ​Tony: "What have you done, Marissa? What kind of game are you playing with me? She doesn't belong here. And yet you had drawn her here, into the sea of sharks. She's not one of us!"
Marissa: "But she's not the only one. Dr. Angel..."
Tony: "Who? That crazy hair-obsessed guy? I don't care about him!"
Marissa: "So you admit, you care about this woman?"
Tony: "What do you think? She's a mother of my son, for plum's sake. But I'm sure you already knew that! I tried to keep her out of harm's way. There were speculations about her connection to me. But that was it, speculations! And then you had to dig the secret out and bring it into the light so that all my enemies have it confirmed now. No one is gonna believe, that her and mine presence here is just a coincidence. You have no idea what it did cost me to stay away from her and my son to protect them!"
Marissa: "I just wanted to know, if..."
Tony: "You and I were friends, Marissa. That's what I thought. It's hard to find good friends when you kill people like I do, you know? But you are just like your father. Selfish and manipulative! You couldn't leave Beryl in peace." 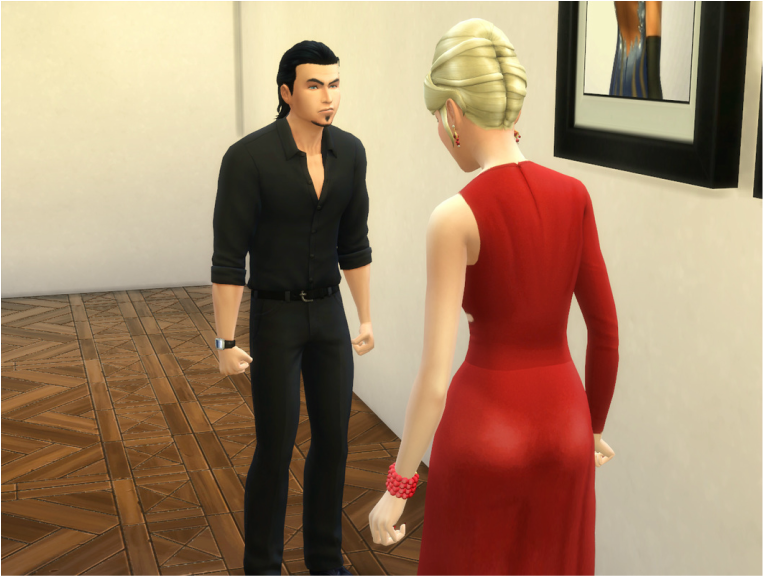 And then he turned around and started walking away from her. She couldn't let it end like this, even after all the bad things he told her.

She grabbed him by his arm, but he pushed her away so fiercely, that she hit the sofa and fell onto it. 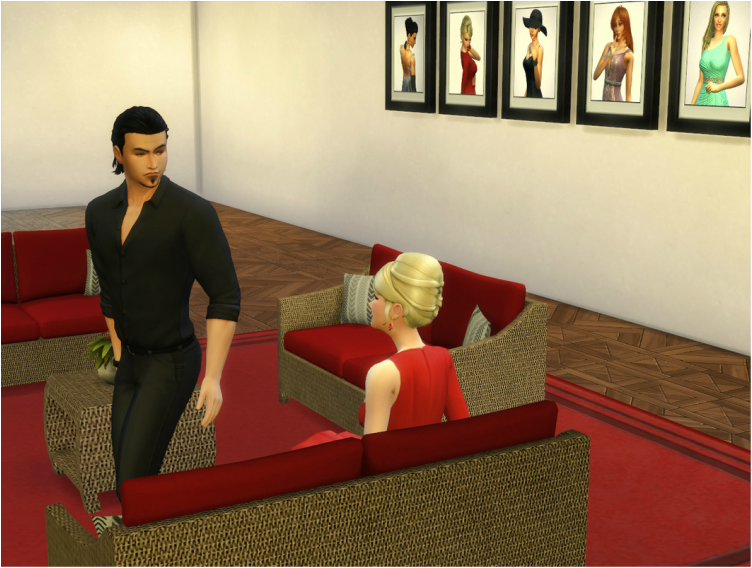 Marissa could only watch him walk away and out of her life. Then he abruptly stopped in his tracks. But not because of herself as she noticed. 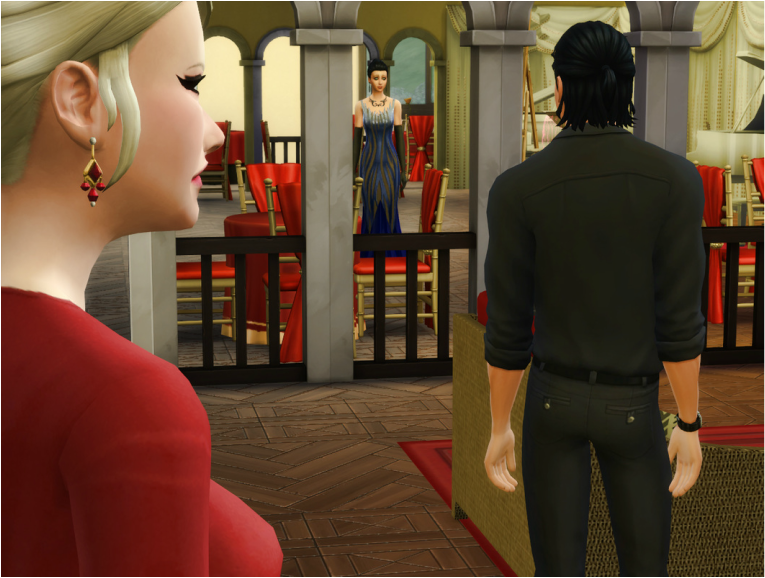