My living room was a mess. Overturned furniture scattered around, several pieces of art I collected through the years either completely smashed or cracked and rendered worthless. Amongst all the mayhem Vincent and I were lying on the floor, panting and bleeding from split lips and broken noses.

"Well, thanks for stopping by, Vincent," I said and propped myself against the sofa that was sturdy enough to have withstood our fight. I pulled myself onto it.

"Yeah, no problem," Vincent groaned. "I'm really glad we could sort things out between us like two civilized adults that we are." He still lay on the floor clutching his head. "Ow, my head is killing me. Did you really have to hit me with the table lamp?" 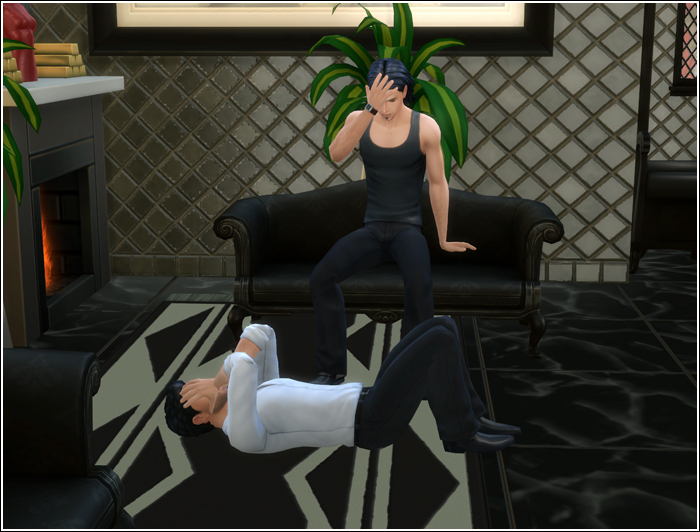 "You were choking me, Vince. What was I supposed to do?"

He snorted. "Aren't we a couple of losers?"
​
"Want me to fetch you some ice for the head?"

"I would really appreciate that. Thanks." 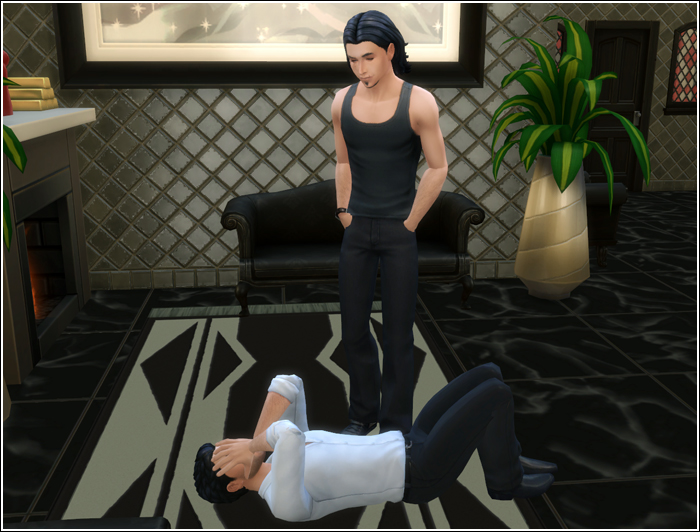 ​
"Better?" I asked him sympathetically when he picked himself from the floor at last.

​Even with my help he barely made it into the bathroom in time.

​"You have a concussion," I observed.

I offered him painkillers. After swallowing them and washing them down with a glass of water I also provided, he rubbed his jaw. I remembered I had hit him there pretty hard too. It was the first thing I did when I had opened the door and saw him standing there. I had been so ready to leave this world behind and he had to choose this day to come and ask my forgiveness. After all the years. More punches and little talking followed after the first punch until both of us have finally reached some kind of peace. 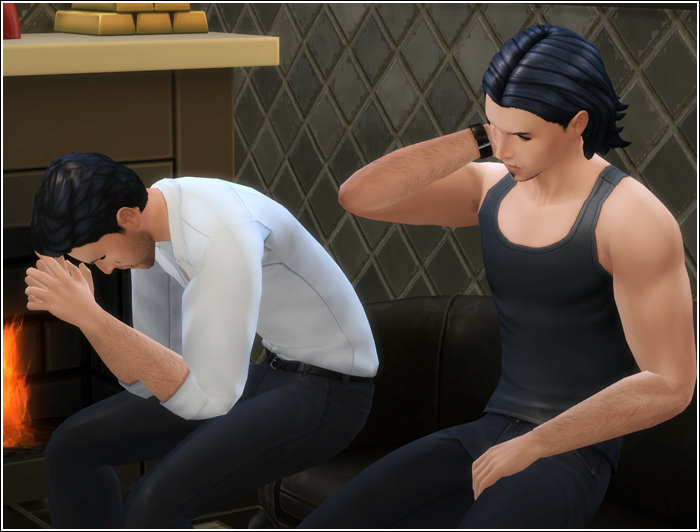 "I'm needed at the court tomorrow morning," he said. "I have a client to defend in a  really tough case. How am I'm supposed to work in this state?"

"You'll do fine. You'd still win with only half of your brain functioning."

"Your faith in me is touching. I wish I hadn't let you down the one time it really mattered."

"Don't start again, Vincent. Now go home and get some rest. I'm calling you a taxi."

"Who's going to watch over you, Tony? I can't leave you here alone after what you had told me you were planing to do."

"I'm fine now." I felt the corners of my mouth twitch, something I haven't experienced in a long time. "I guess whacking you on the head with the table lamp rid me of my darkest thoughts. We should do it again some time."

"Or you could just see a therapist." 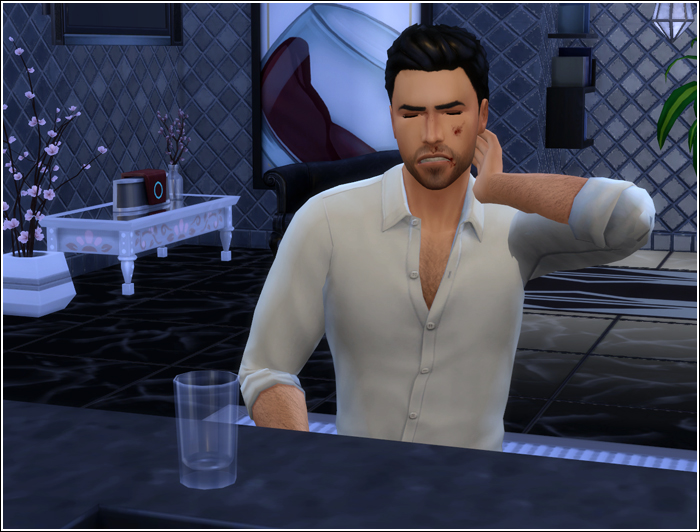 After I have sent Vincent home I went to my bedroom. I picked my gun from the bed and locked it in the drawer.
Then I stood in front of Beryl's large photograph for a while as I often did. 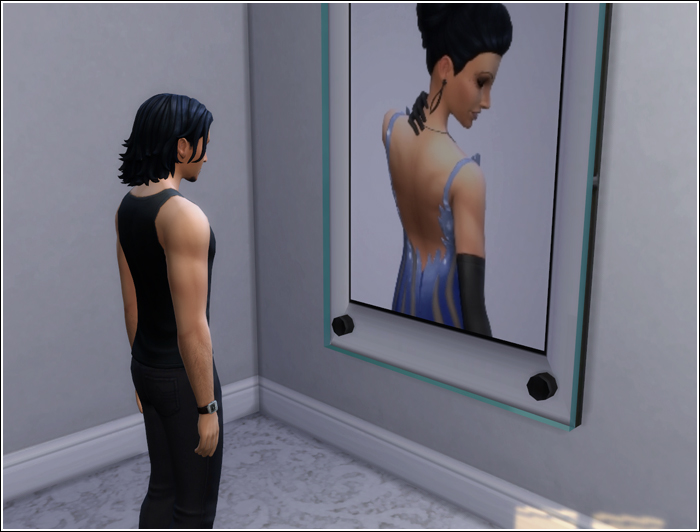 ​I know. I know, my love. You didn't want me to do it anyway. But it's been so hard all these years without you. I still miss you terribly. I miss our laughs. I miss our little arguments. I miss our toes. Will the pain ever fade away? I'm not sure I want it to. I feel you in the pain, I'm close to you through it. The pain makes you real, makes us real. I suppose I will have to learn live with it if I don't want to forget us. 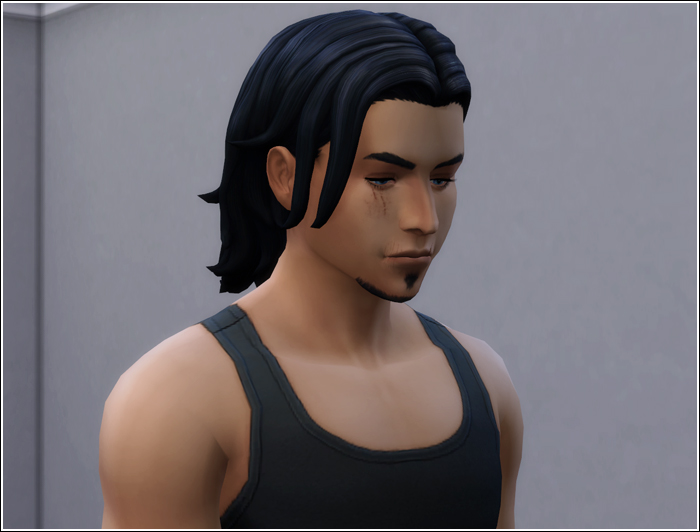 ​"He sucked on her tongue inside his mouth. Johanna's head began to spin. His hand squeezed her right breast and a moan escaped her throat, it came from a very deep..."

Raven read the last paragraph and smashed her fist on the desk angrily. No. This will not do! Something was missing and she couldn't figure out exactly what it was. Her eyes wandered to the three volumes of Love & Ruin next to her and she snarled. How? How did Beryl Heffner do it? She hadn't studied literature or taken any writing courses. Raven checked. So how did she manage to write three gripping romance novels with such ease and in such short time? Raven knew her own writing style was more polished and her vocabulary richer. And yet the publishers kept returning her manuscript, uniterested. She was rewriting it again and again. Does one have to sleep with a criminal and die a violent death to become famous? 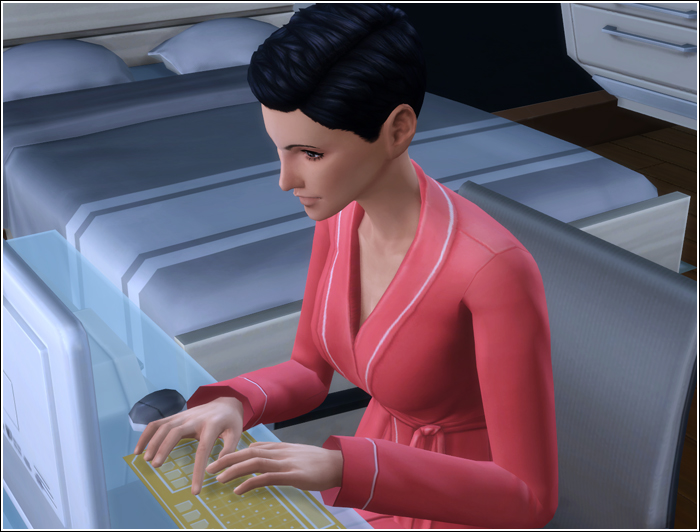 Frustrated she closed the document and leaned back in her chair. Life isn't fair, she thought. She's been working on her dream to become a writer since she was a teenager. She read a lot, she started working in local newspaper, she participated in various literary competitions. She also published a criminal fiction novel but it did poorly. No chance she could start writing books for a living yet. She thought writing a romance novel would be much easier. She didn't plan to publish it under her real name, of course. She considered the genre inferior, but it was good enough for making money so that she could write serious literature. It turned out writing a romance novel wasn't as easy as she had assumed. And now it has become a matter of personal pride to write and publish one. 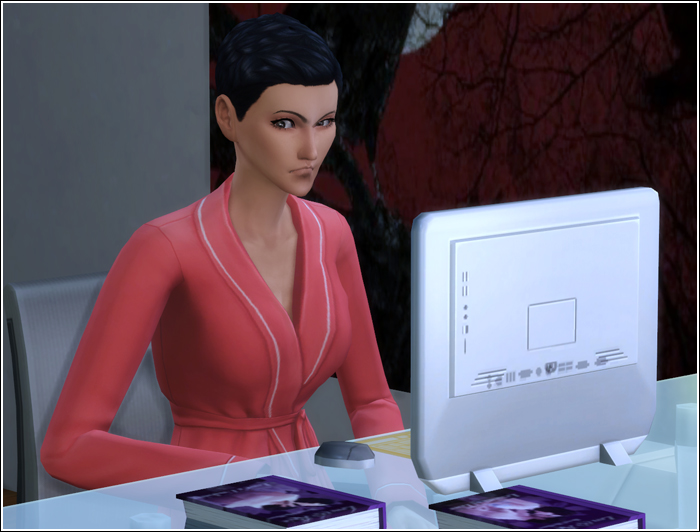 She let out a sigh and picked up the magazine that came in today's mail and another one that was peeking out of her neighbour's mailbox and that she snatched because of who was on the cover. Yes, she sank so low. She also made a mental note about her neighbour's reading interests, might prove useful later, in case she's in a need of a... company.
She already read those magazines, but couldn't help herself and opened them again. You're acting like an infatuated teenager, Raven. Yes, I am, and half the women of Newcrest with me, obviously. 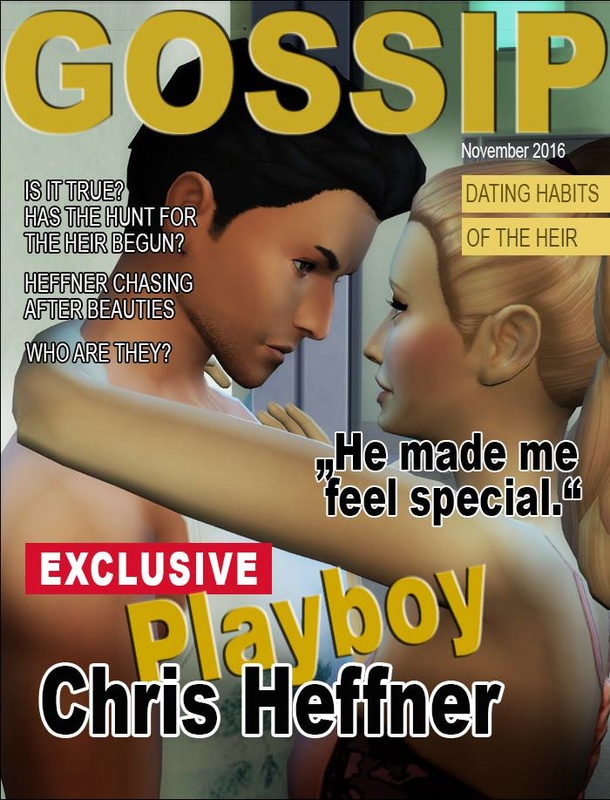 She looked through all the pictures. So the legacy boy has finally found a way to deal with his loss, hm? Raven had been through this stage too and knew it didn't work. Look at him. He's not holding back at all. He craves love and at the same time he won't let anyone get too close, too afraid to lose them. He plunges into these short term affairs, feeling worse after they have ended. What he needs is a friend he could trust and confide into. A friend that would help him open up, convince him that it's not a weakness to let all those emotions pour out. Such friends are hard to come by though. Raven wanted to be that friend to him and more if things went well. She studied the pictures of him and ran her fingers over them. Why does he have to be so freakin' attractive? 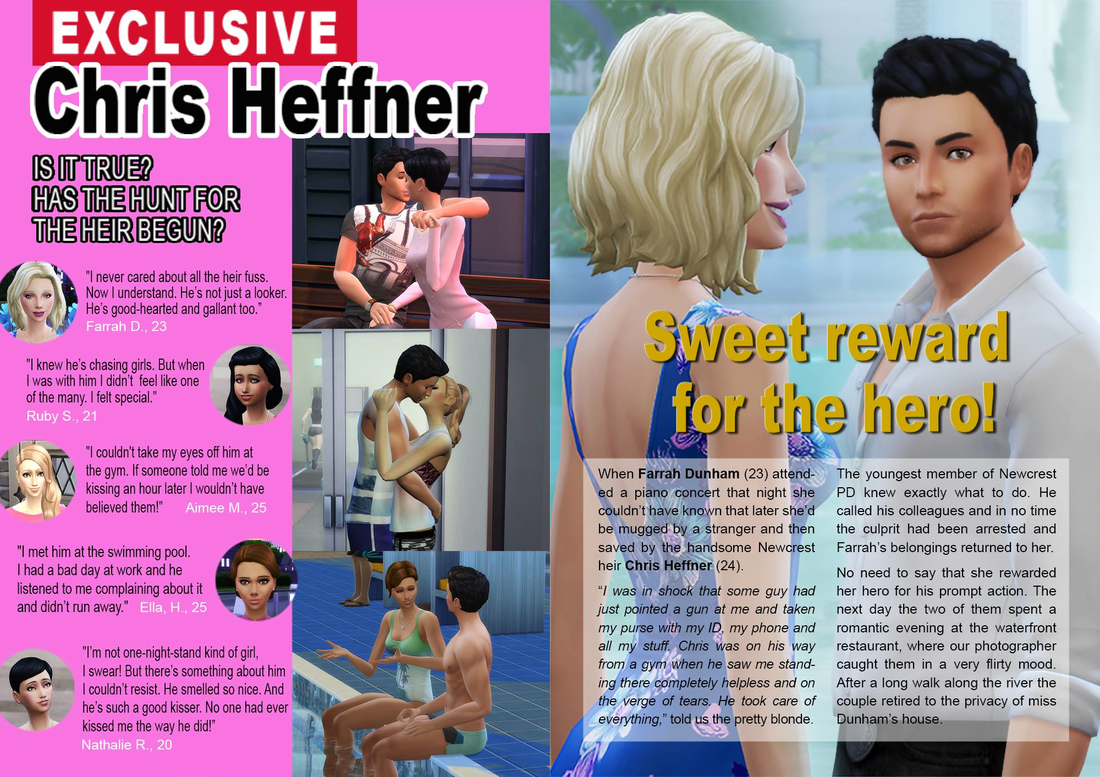 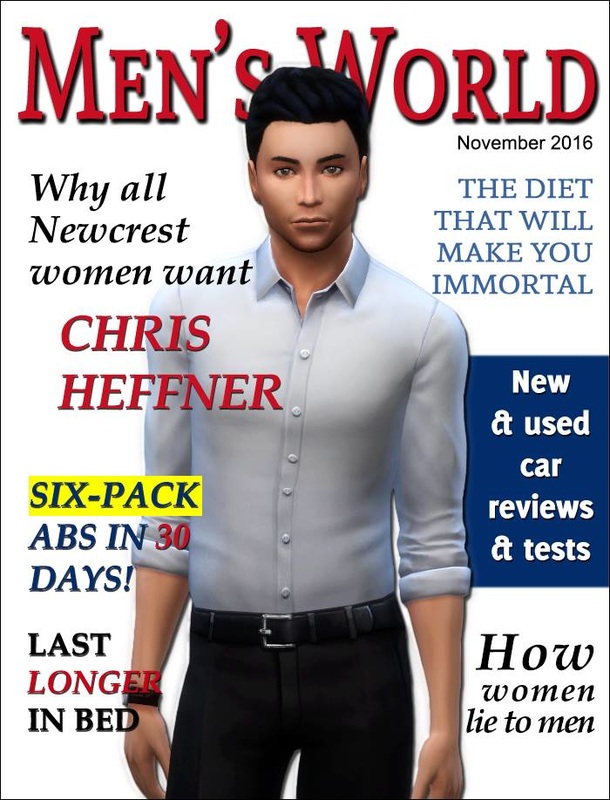 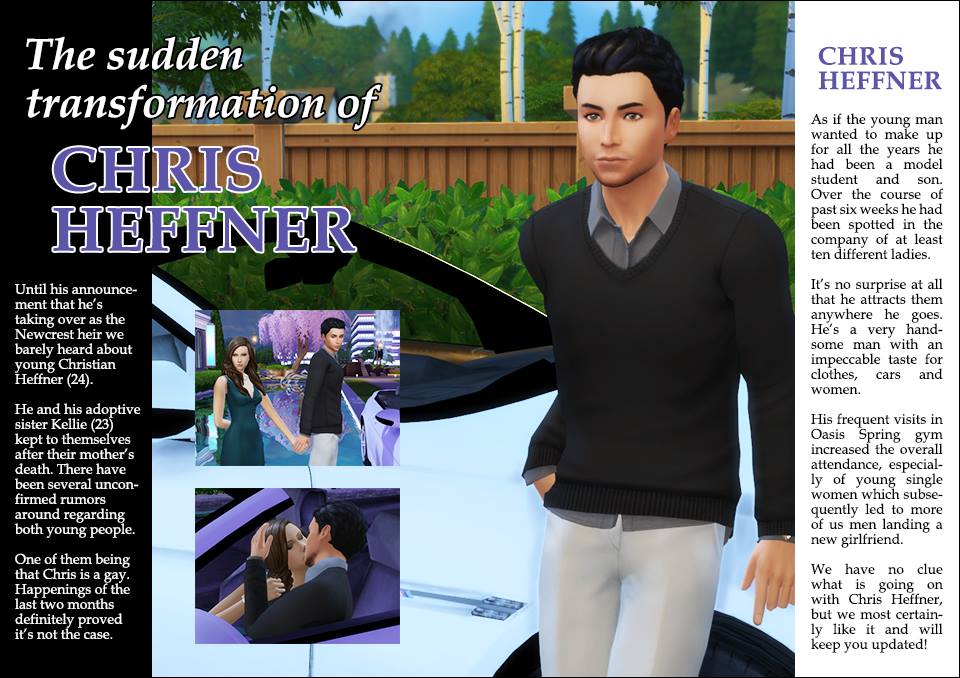 ​She took the magazines with her downstairs into the kitchen to study them more over a cup of coffee. The article in the second one was boring too but the pictures were better. She couldn't help herself being jealous of the girls he had been kissing, even though she knew they probably didn't mean anything to him. 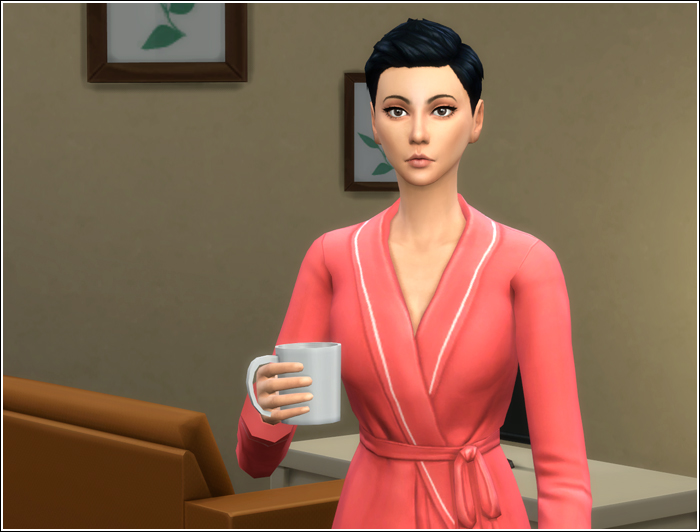 She barely finished her coffee when she heard a knock on the door.

​You've gotta be kidding me! The legacy boy himself on my doorstep!

She frantically stuffed the magazines into the cupboard as Chris knocked on the door the second time. She realized she's still in her bathrobe, with no makeup on her face. Shit! No time for that. ​ 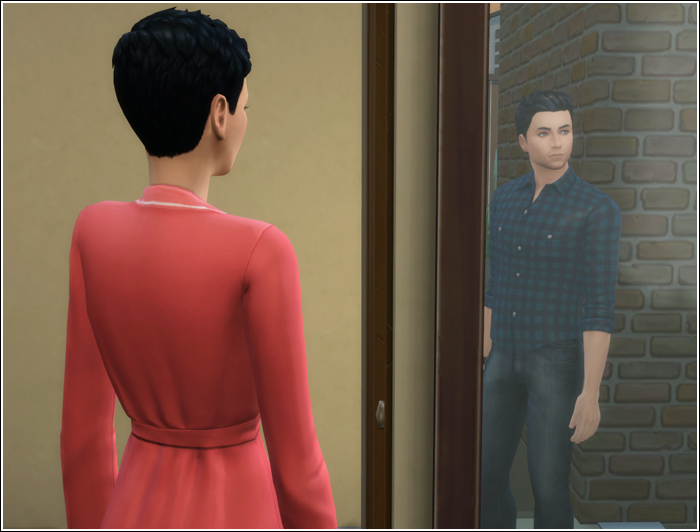 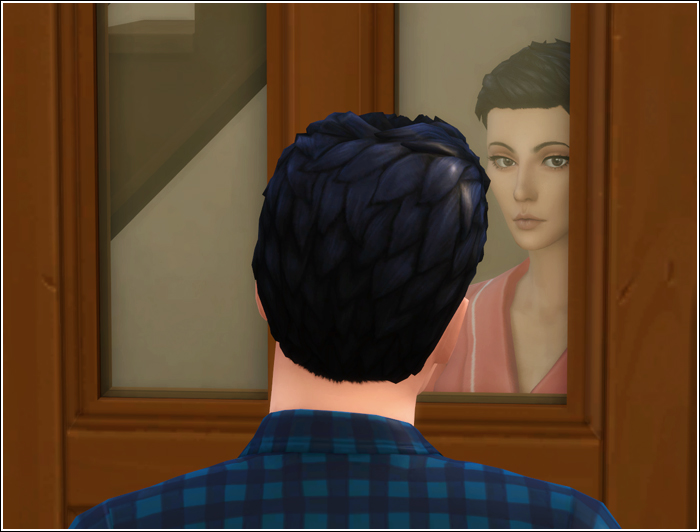 "What are you doing here, Chris?"

"I'm here for the interview."

"Well, the Chief told me now. He asked me to stop by your place today. He insisted, actually."

​"Come on in then. Make yourself comfortable while I change into something less casual." 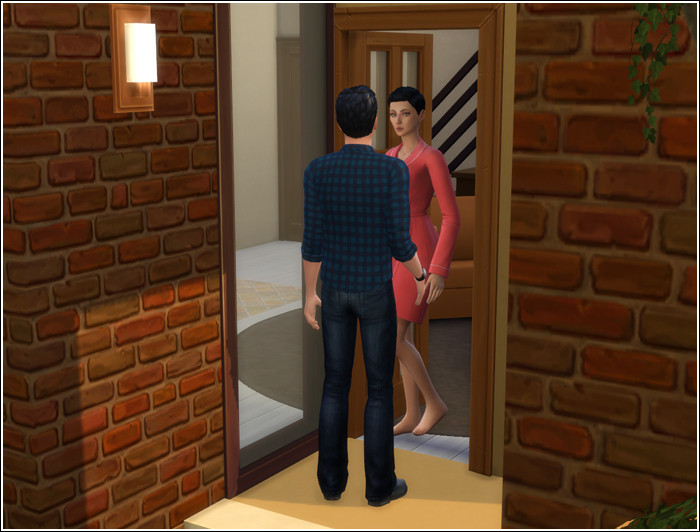 Raven ran upstairs and changed her clothes about six times before she was satisfied with her appearance. She went back downstairs and seated herself in the chair next to Chris. Turning on the voice recorder she started the interview. She was determined to give the readers something better than just juicy gossip. She wanted to show them the real person behind the heir title. In the interview they covered his job, his views on local crime and justice, they discussed the new library that was being built in Newcrest in his mother's name.

Things were going smoothly until they touched the subject of his mother's death. That's when he withdrew into himself and went on the defensive. Raven turned the recorder off and attempted to calm him down. It didn't work. 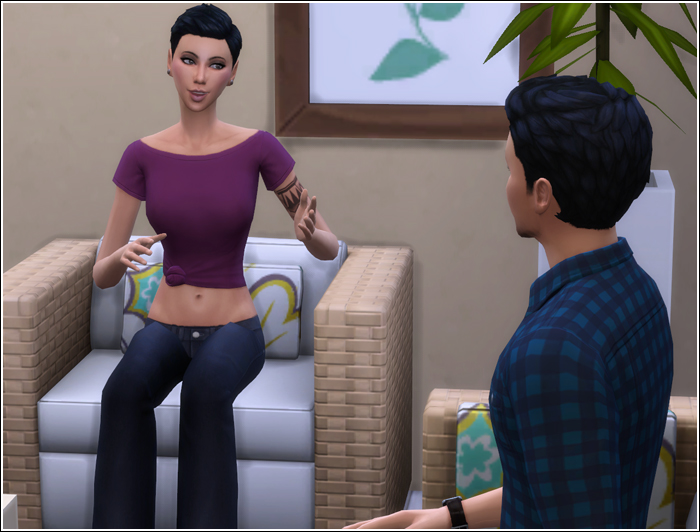 "I'm not going to discuss my mother's death with you or anyone else. You and your lot have already written plenty of lies about my family."

That hit the nerve in Raven. "Are you comparing the serious newspaper I'm working for with those tabloids? I thought you'd know the difference. I'm trying to help you here. Don't you want the people out there to know the real you?"

"I wish everyone just left me and my family alone. We don't need the publicity. The Chief said I had to do this interview and I told you all you wanted to know about my job and some more. But I'm not obligated to discuss my personal life with anyone."

Things were not going the way Raven had planned. She knew she should compose herself, but this was as much sensitive for her as it was for him. Her problem was that she cared too much about him and couldn't remain unbiased in this case as her job required. "You've put your personal life on public display in the last two months. How many girls have you slept with? At least ten I hear. Is this your idea of staying out of public's sights?" 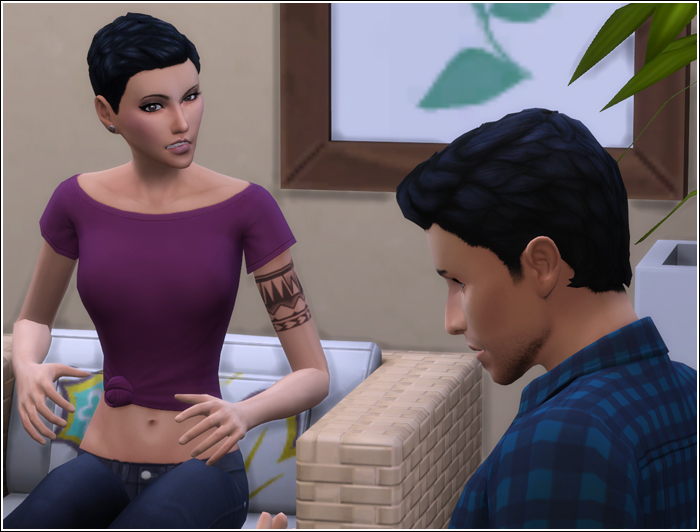 Chris jumped to his feet. "You're way out of line, Raven! With whom I do or do not sleep is none of your fucking business!"

Raven followed jumping on her feet too. "Can't you see I'm trying to help you mend your public image here, you idiot? Or do you want to enter the history of this town as the guy who banged most local women?"

He bared his teeth at her seething with anger. "All I know is, that the only person you ever wanted to help was you and you only! You don't care about anyone. Maybe we should discuss what you do with my boss in his office behind the closed blinds!" he added acridly.

Raven wanted to yell at him more, but she paused in surprise as the full meaning of what he'd just said hit her. Is this what he's been thinking of me for all those years? That I don't care about anyone? That I only use people? It hurt. She desperately searched for the right words.

He just rolled his eyes and headed for the door.

​He's going to leave in anger just like when we were teenagers. I'll never be able to get through to him again! 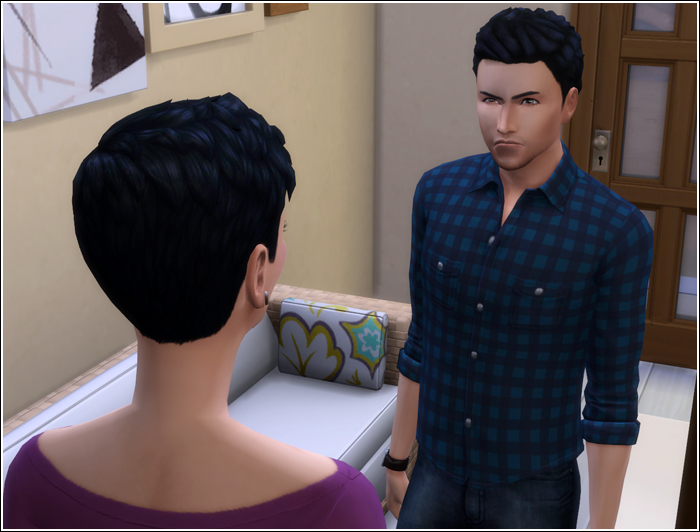 ​She met him before he reached the door.

That made him stop and look at her. He shrugged. "It's not my business anyway. You can do whatever you want." He reached behind him for the door knob.

Raven desperately grabbed his arm. "You can't leave like this, Chris. Not when you're so angry with me. Not again."

He caught the desperate tone in her voice and raised an eyebrow. "Why should it even matter to you in what mood I leave?"

"Because... because..." The words were escaping her again. She wasn't used to express those feelings verbally. Anger, contempt, indifference - those she could do. But this? How could one compress what she was feeling into something so small as words? There was no time for her to learn the language, so she did as every foreigner does and used her body to do the talking. 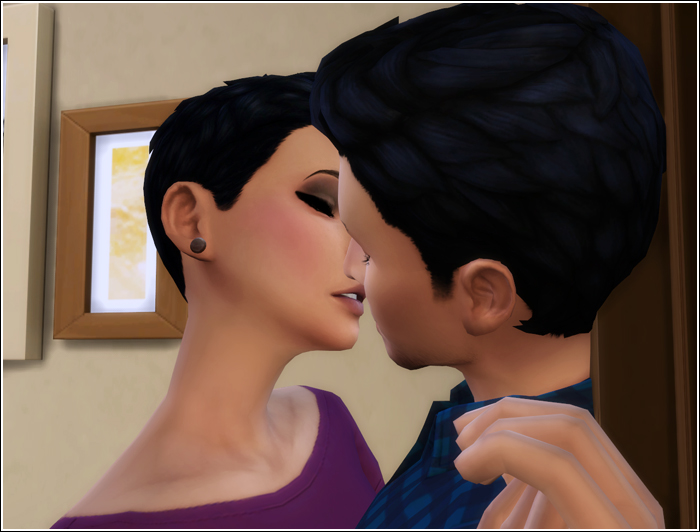