Every whisper
Of every waking hour
I'm choosing my confessions
Trying to keep an eye on you
Like a hurt, lost and blinded fool, fool
Oh no, I've said too much
I set it up

Losing My Religion by R.E.M.
3.9 Sweet Hello, Sad Goodbye
The ride in Tony's car was quickly over. They stopped in front of the Heffners house and got off the car, but none of them was willing to say good-bye yet.
Tony noticed Beryl was shivering with cold from the ride and regretted he left his jacket at the Castellis. He at least started rubbing her arms to make her warmer. He pulled her closer and kissed the top of her head. He couldn't keep his hands off her, neither could he make himself to let her go. He wished he could stop the time and live in this moment for the rest of his life. The thought of waking up alone in the morning and all other mornings after that was unbearable. He wanted her by his side forever. He knew, he could grab her and throw her in his car kicking and screaming, and drive to the end of the world, just to have her for himself. 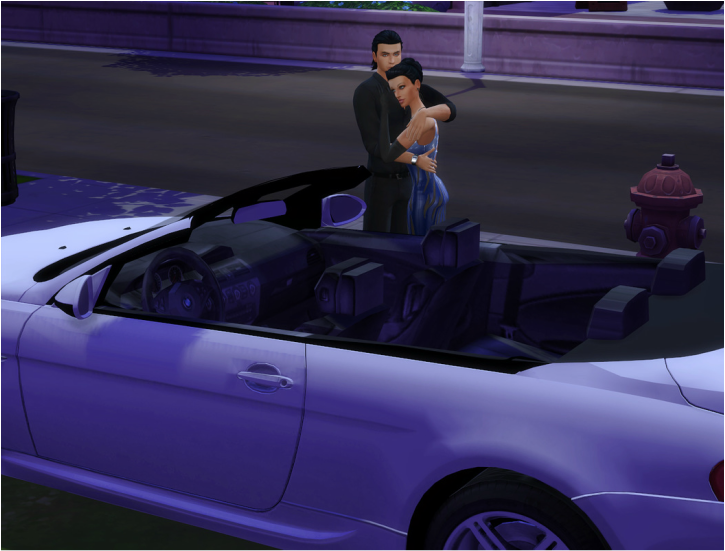 ​But he wasn't capable of doing anything against her will. She decided to stay in Newcrest and continue her legacy and he respected that. He might have joked about giving her the option to take him as her lover, but the truth was he was desperate. He couldn't give her the whole happy ending package like any other man, so he offered what he could, hoping selfishly to get at least a piece of happiness for himself. In his heart he knew she deserved much more. If he didn't meet her again tonight, it would be much easier for him to let her move on. But when he saw her, his possessive self took over and he marked her as his territory in front of everyone, not caring about consequences. Her brother wasn't wrong about him at all.

Tony: "I could stay, you know. Just say the word."
Beryl: "Don't tempt me, Tony. I don't want to regret anything in the morning."
Tony: "And do you? Do you regret anything that happened between us, Beryl? Because I don't. Because I lo‒" 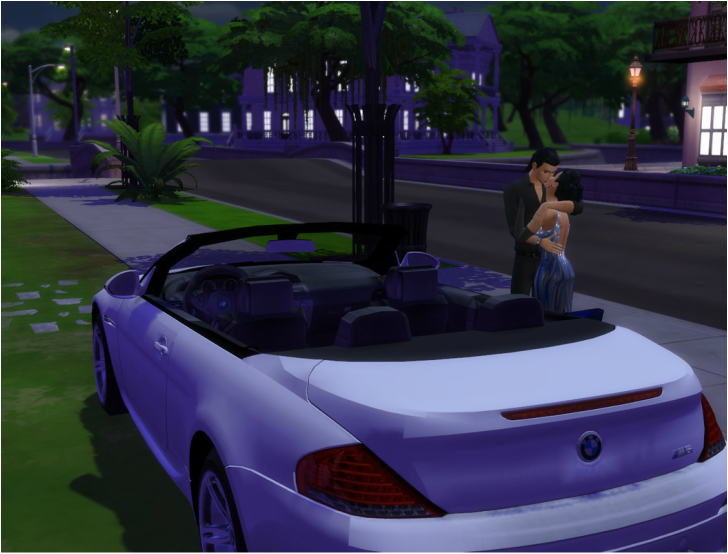 A little dark-haired boy in his pyjamas was rushing toward them, followed by the overly protective brother of Beryl's. Of course he had to intervene, Tony thought partly amused, partly irritated.
Then he realized, who the boy was, and went rigid. His son. He's going to meet his son right here, right now. He wasn't ready. He felt a lump in his throat and swallowed hard. Twice. It didn't help. 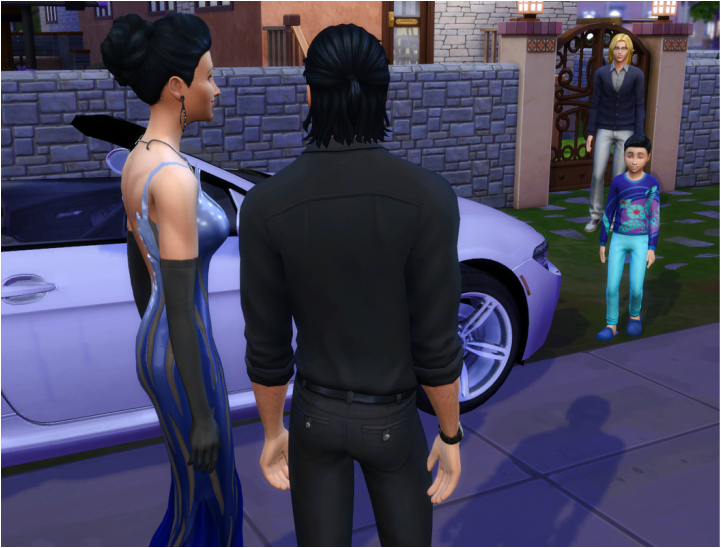 Beryl: "Chris! You are supposed to be in bed. Do you have any idea what time it is? And don't run around here in the slippers you wear at home!
Chris: "I wanted to see you! I woke up when grandma and uncles arrived. I was waiting for you, but you weren't coming. Then I saw you from the window and Brian allowed me to go say hi."
Beryl: "It seems that I need to have a chat with uncle Brian about certain things."
Chris: "Mom, you look like a princess! And guess what? We went fishing yesterday with uncle Bao and uncle Bernd and cousin Leona. We caught plenty of fish and uncle Bao made a dinner out of them. It was yummy!" 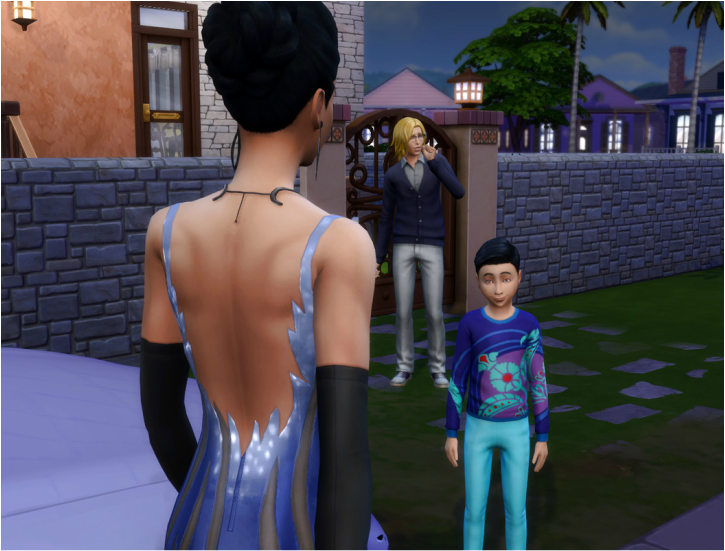 Tony stood there, still a little nervous, and watched the mini version of himself gesticulate animatedly and making funny faces while talking crazy fast and he loved the boy instantly. He slowly moved closer to Beryl. The boy immediately switched his attention to him and frowned. 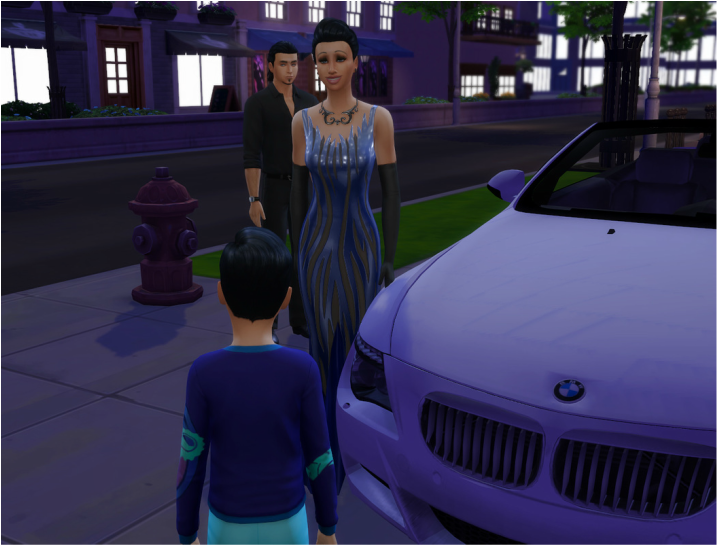 Chris: "Who is it, mom?"
Beryl cleared her throat.
Chris: "Who are you, sir? I saw you kiss my mom from the window. You are not dressed as a prince. Only a prince can kiss my mom. Or my dad."
Tony felt his ears went red. "I'm afraid I'm rather a warlock than a prince. You are very smart, do you know that?"
Beryl took a deep breath. "Actually, Chris, this is your father."
Chris: "He is?"
Beryl: "Yes. You wanted to meet him, remember?"
Chris: "Are you really my father, sir?"
Tony: "Yes, I am." 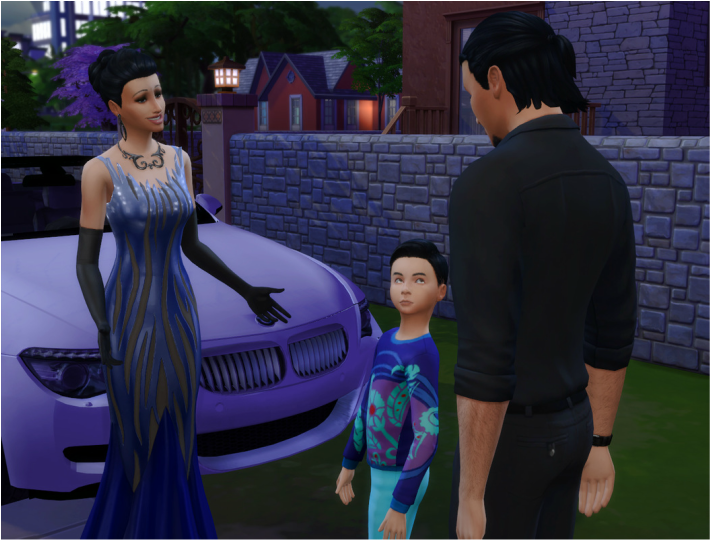 Chris: "Are you a criminal?"
Tony blinked and shot a look at Beryl who just shrugged and let him deal with the question on his own. He could see she was enjoying this (and her brother probably too). He wondered where did the question come from. How was he supposed to answer that? He didn't want to lie to his son, nor he wanted to disappoint him. The boy was eyeing him intetly, waiting for his answer.
Tony squatted down to be on the same eye level as his son. Then he looked into his big brown eyes and let the truth enter the small space between them.
Tony: "I am."
​ 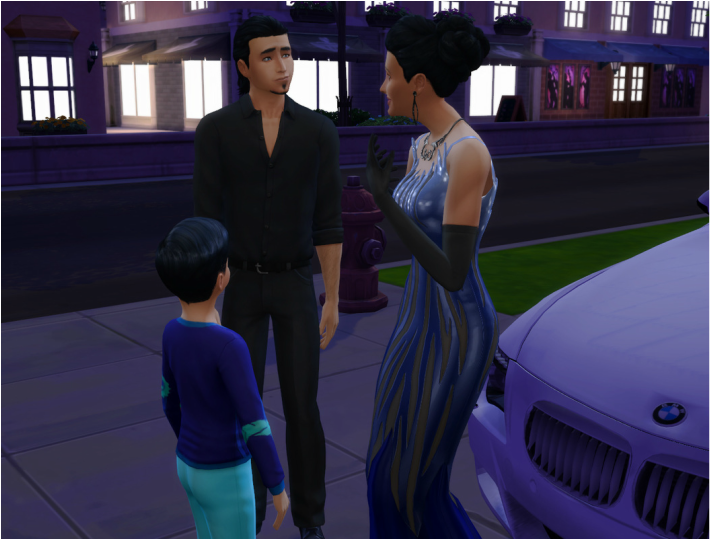 Chris blinked several times and opened mouth and shut it again. He grabbed his mother's arm as if to protect him from his father. For the first time in his life Tony hated his job. His heart was breaking at the thought of losing his son's trust. Hurting adults was one thing, but disappointing his son made him feel like the worst kind of criminal. He stood there lost, silently begging Beryl for help. His look caught hers and held it for a minute. Beryl the Merciful took pity on him.

Beryl: "Chris, don't you want your father to explain it to you?"

​And the little guy gave him another chance. 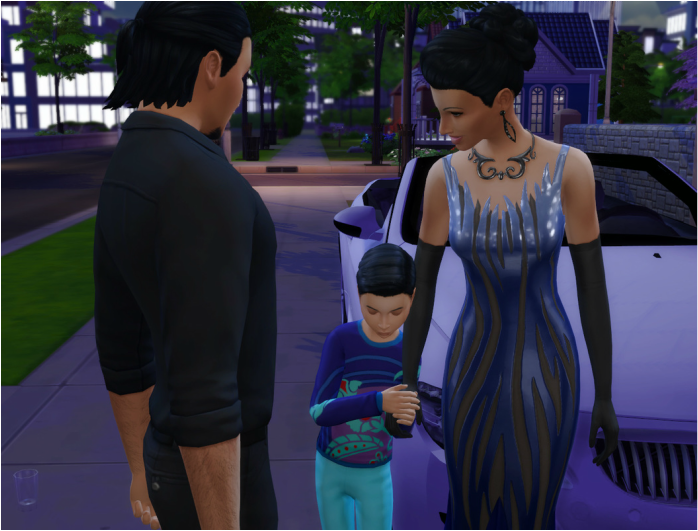 Tony told him he wasn't always a criminal. But he had to become one, because when he needed them most, there were no heroes around to help him, and he had to help himself. And then he started relying solely on his own skills and solved his problems without the help of authorities, which they didn't like, of course. One thing led to another and he started "helping" other people. He liked the money they paid him and the freedom that came with it.

Tony: "It's like finding a treasure, son. Some people would return it, hand it to a museum and they would feel good for it. I feel better keeping the treasure for myself, cause it can buy me things I like."

Tony wasn't sure his son understood everything he told him, but at least he was listening. And his eyes were saying he might accept the truth sooner or later. It happened rather sooner, when Tony used the magic word "family".

Tony: "I would never hurt you or your mother, Chris. You are my family and I love you both. Never forget that."

Beryl's eyes filled with tears after that and it worked even better on his son, whose face lightened up and then he presented Tony with another problem. 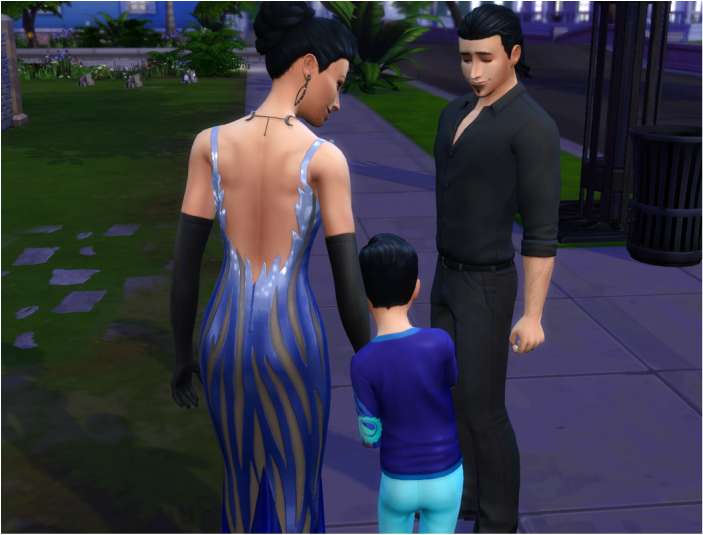 ​
Chris: "Does it mean you are moving with us now?"

Beryl: "No, he's not. He has to keep moving and hiding. That's what he does."
Chris: "Why does he need to hide? You said he'd saved uncle Brian. It was a good thing, wasn't it?"
Tony: "It's complicated."
Tony hated using the phrase parents so often used on their kids, when they were reluctatnt to explain things. But his situation was really complicated.
Tony: "I need to ask you a favor now, Chris. You must not tell anybody that you saw me. I don't ask this for myself, but for your mom. It could cause her trouble. Can you do that?"
Chris: "Okay. I think I don't want the police to catch you. I think I like you, even if you're a criminal. You're a nice criminal and you have a nice car."
Tony: "They won't catch me. I promise. I'm smart. And you are smart like me, aren't you?"

​Beryl's brother kept glaring at them and Tony noticed it made Beryl nervous. 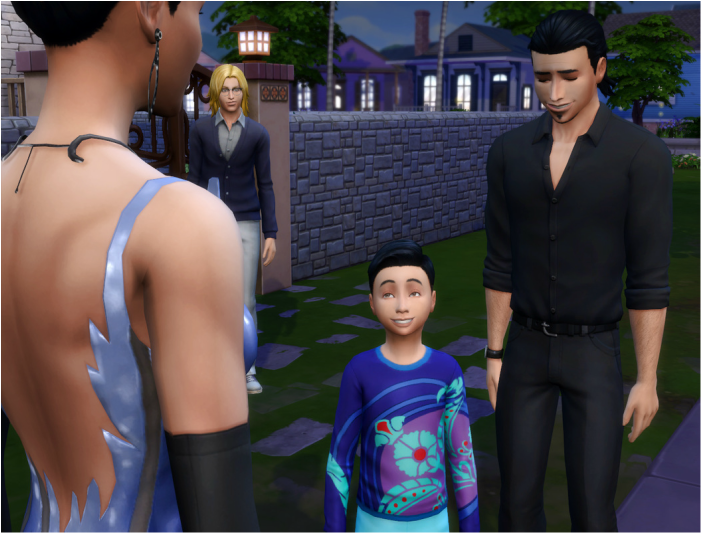 Tony turned around. He put his hands on his son's shoulders and returned young man's glare with a smile, challenging him. His son knew what he was and still liked him. Like it or not, pal, but they are my family too. Finally Beryl's brother decided to retreat into the house.
Tony realized he's drawing strength from the little boy. It felt so right to be here and hold him. It gave him a different sense of accomplishment than he was used to after finishing one of his jobs.
Then Beryl broke the magic of the moment. 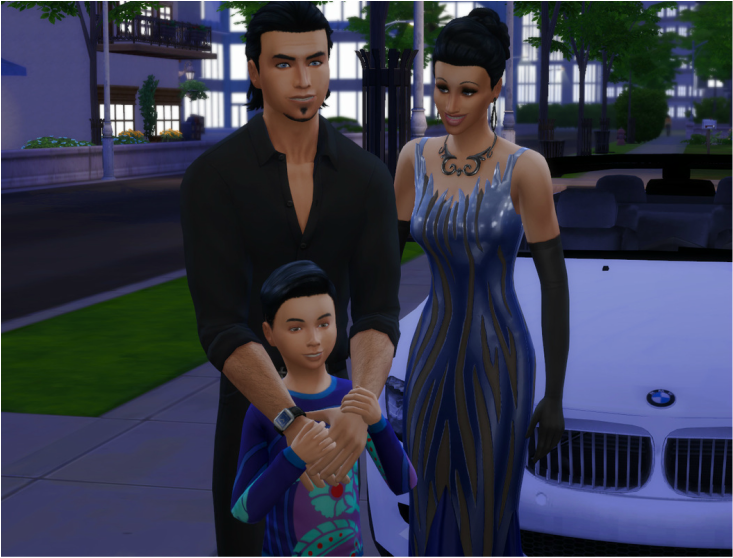 The sun was rising and their time together was over.

He could see the cracks in Beryl's carefully maintained self-control. Her lower lip was quivering and then tears started streaming down her face. 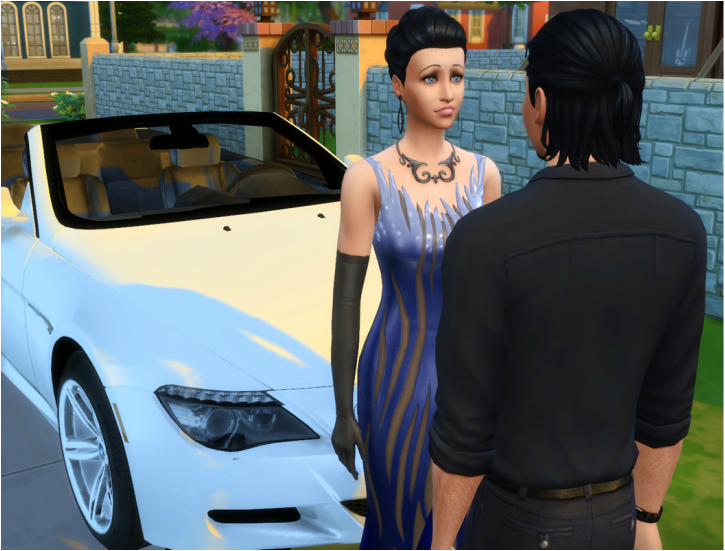 He caught the tears with the back of his hand.

Tony: "Don't cry, my sweet Beryl. Have a happy life. And if you or Chris ever need my help or anything, call me and I'll be there. Now go, we both know that you have to. Our son is waiting for you. Kiss him for me. Goodbye, Beryl."
Goodbye, my love. 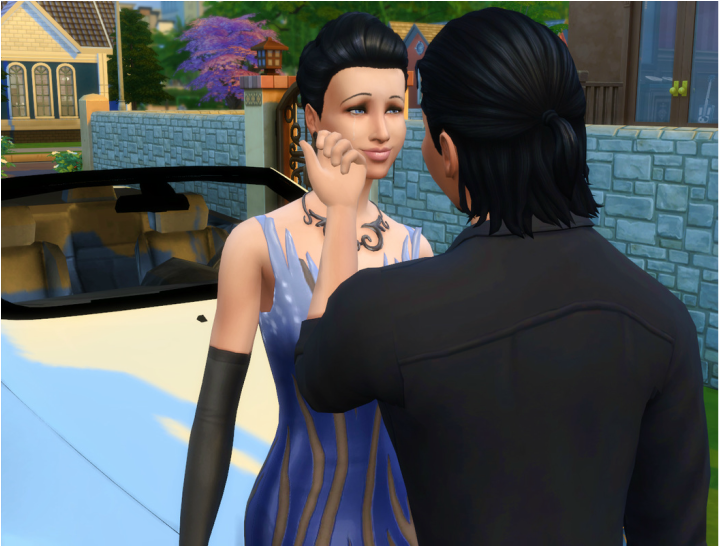 And then she was gone from his life. 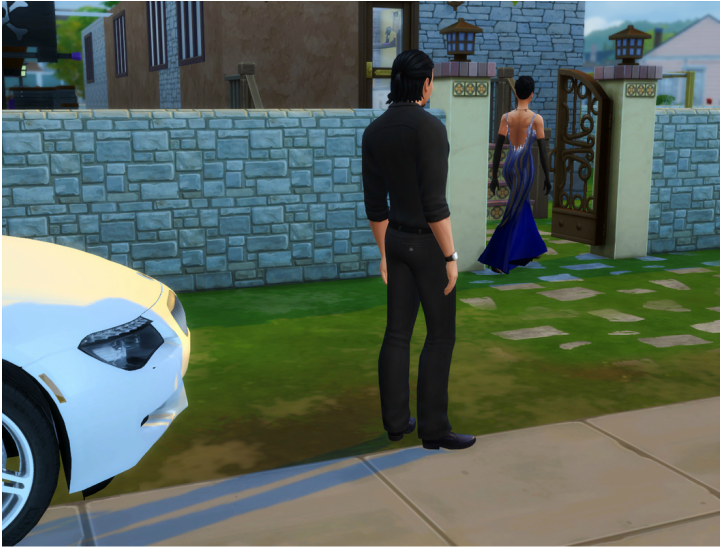 He knew he wouldn't be able to sleep now. There was only one place he could go to drown his sorrow. 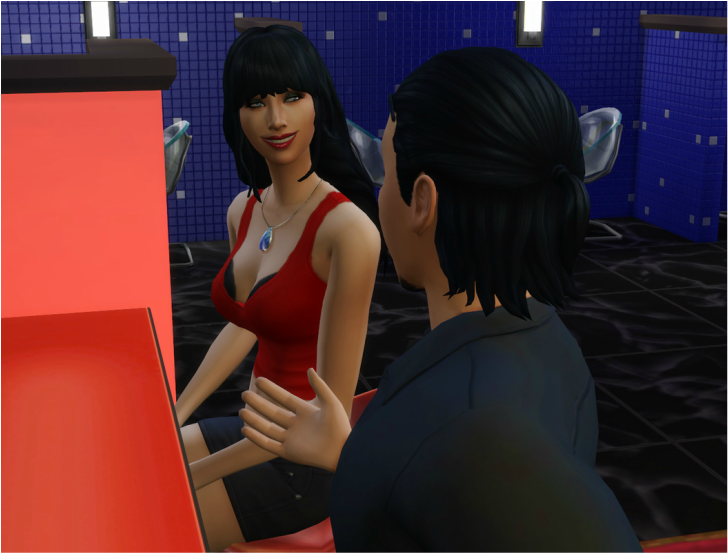 ​There was only one person that could ease his pain now. 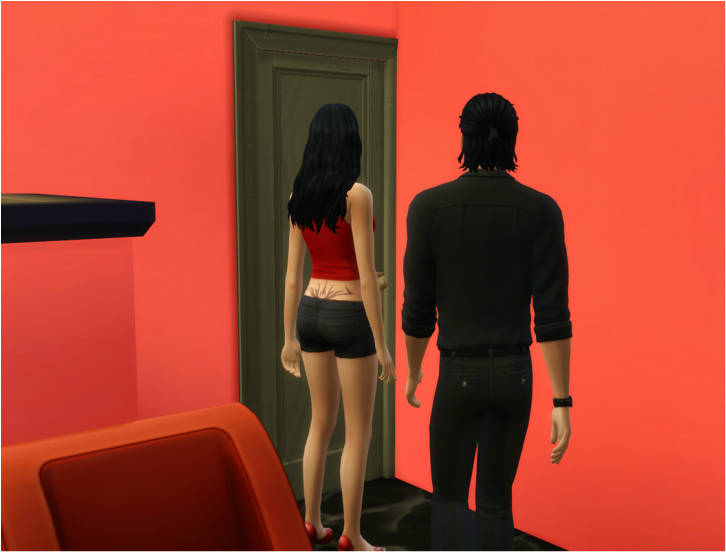 There was only one thing he could think of after being so close to Beryl, touching her and kissing her... 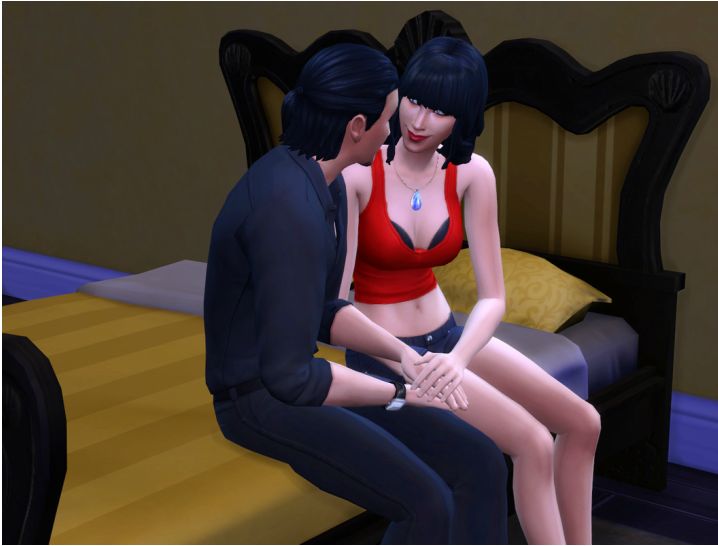 He was just a man, after all. A man with needs and a broken heart. 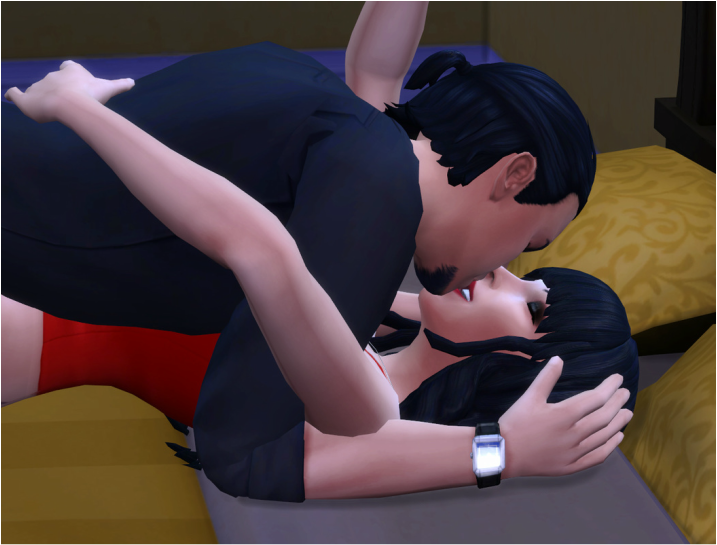