(The Winner Takes It All by ABBA)
​3.8 Winners and Losers
​
The photo aucion was in full swing, when the Heffner ladies and Tony arrived to the main hall. Most of the photos already had their new owners, including Marissa's. Her picture sold for 100.000 simoleons and has been just replaced by Babs' picture on the easel. Dr.Angel Locklear was standing next to Marissa, flashing smiles at everyone and thanking for their generous donations. 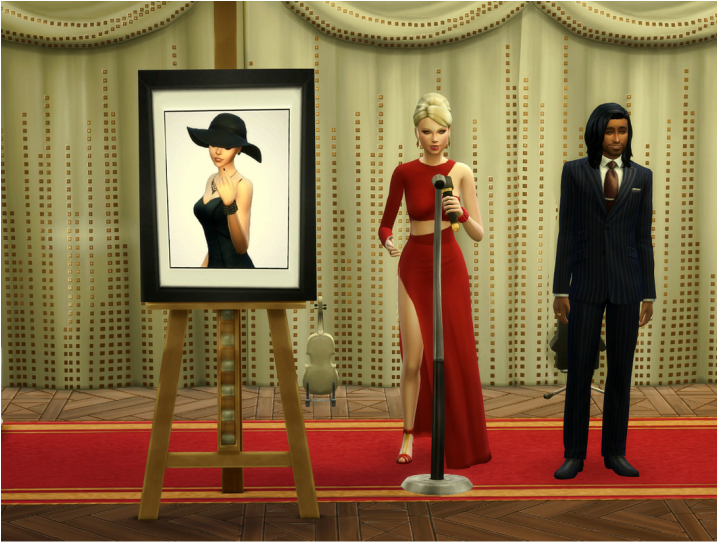 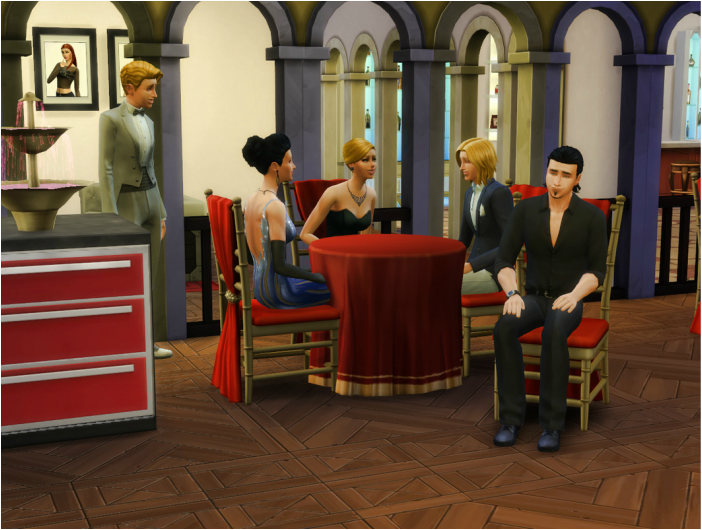 Babs: "Oh my Watcher! Beryl, your man just bought my picture for 50.000 simoleons! Fifty thousand! Just like that. You didn't mention he's so rich!" 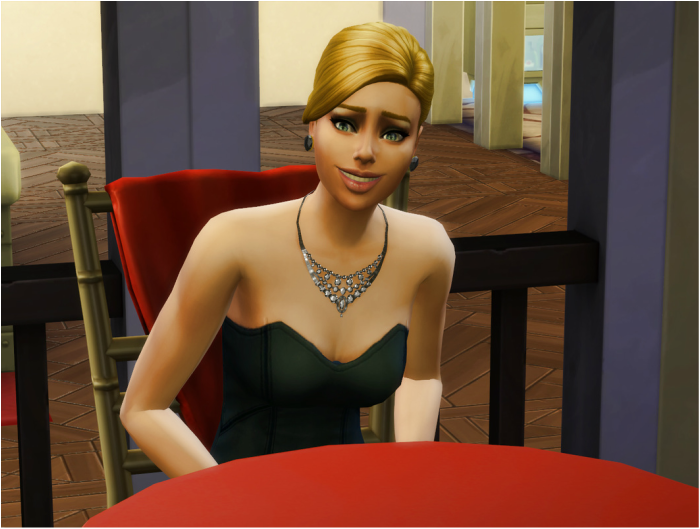 Then Beryl's picture was up. Marissa looked very uncomfortable at this point shooting uneasy looks in Tony's direction.
Tony sat at the Heffner's table, tapping his foot unpatiently, as the price of Beryl's photo slowly climbed, until he couldn't take the wait no more and jumped to his feet and marched to the front. 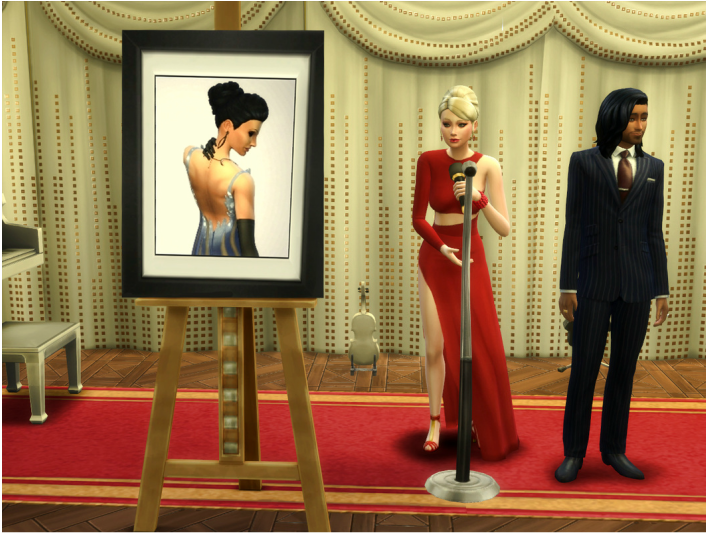 ​He took the microphone from shocked Marissa and spoke loud and clear in order for everyone to hear him clearly: "Two hundred thousand!"
And they sure heard him. 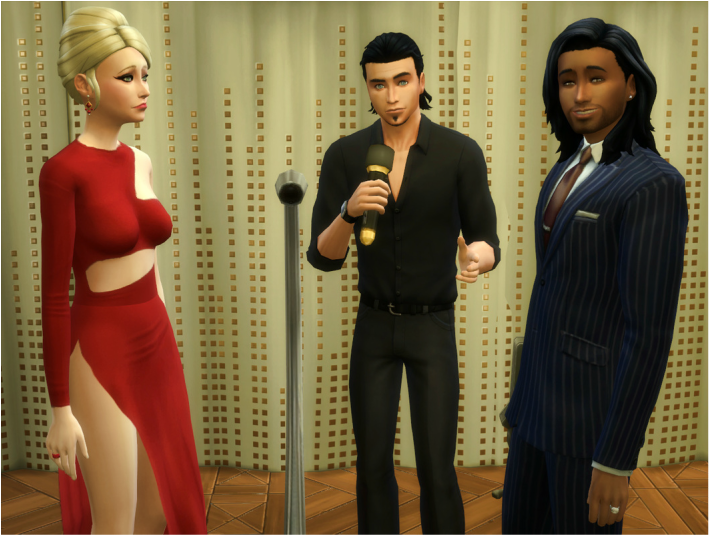 Silence fell on the room. The guests were in shock. It was an unwritten rule not to bid higher than the price for which the host's item was sold. Doing just that was an insult thrown into the face of the host. The Castellis were well-liked among the rich and powerful and everyone was outraged by Tony's rudeness. 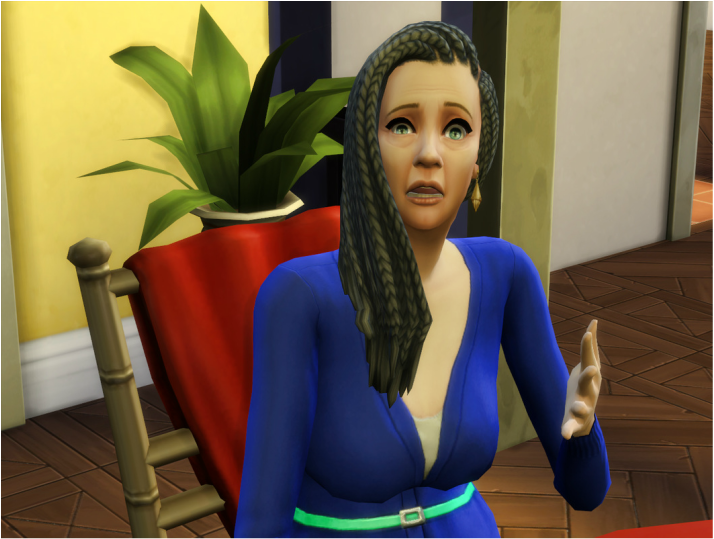 There was one person who felt more furious than anyone else. Watching his daughter barely holding herself together after such humiliation would break a heart of any loving father. Marissa was Michael's only joy in life, after his wife had passed away. Tonight Michael decided that Tony Corleonesi must die, no matter the cost. He would spend his whole fortune if necessary to make Tony pay. But he will make him suffer first. He'll rip the man off everything he cared about. And then he will kill him. 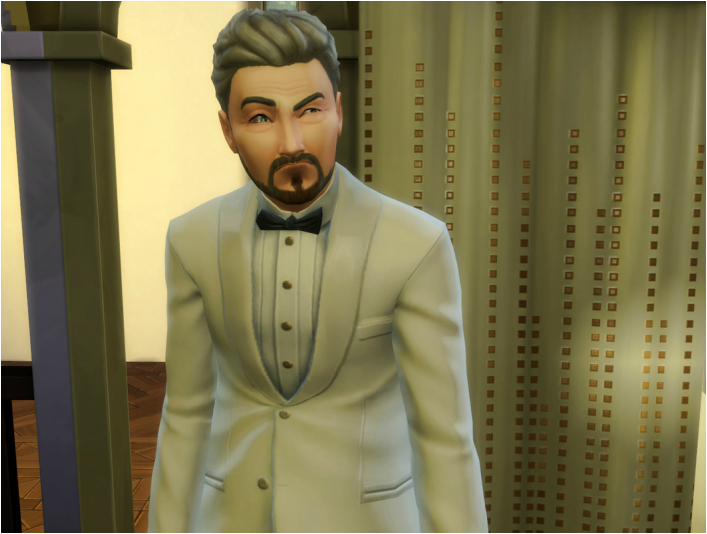 The only person who didn't care about someone's hurt feelings, pride and whatnot was Dr. Angel Locklear. He approached Tony, beaming at him and shaking his hand wildly.

Dr. Angel: "Such a generous gift, Mr... ?"
Tony: "Corleonesi."
Dr. Angel: "Uh... right. Would you like the orphanage be named after you, so the whole town knew who's the great benefactor? I can arrange that right away, if you wish."
Tony: "I'd rather not."
Dr. Angel: "Generous and modest, what a rare combination of virtues in one person!" 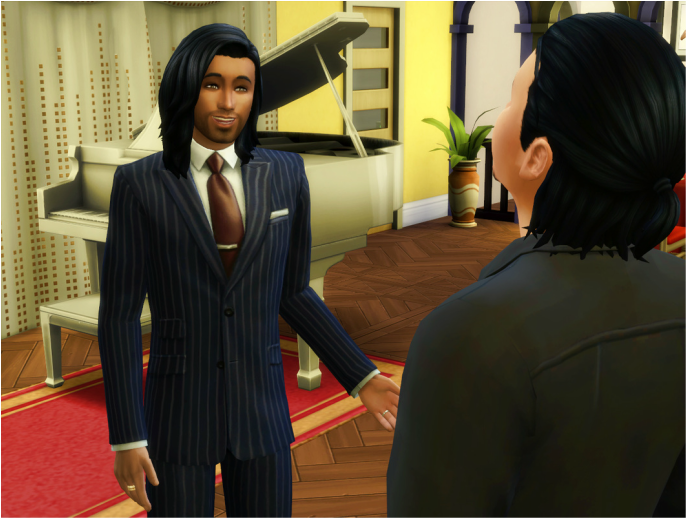 Tony: "But perhaps you could name the institution after the lady from the picture."
Dr. Angel: "Sure, sure. We can do that. Great idea!"
Tony: "Now if you'll excuse me..."
Dr. Angel: "Of course! We'll keep in touch!"
I seriously doubt that, Tony thought. I already wasted money on your project, I won't waste my time too. 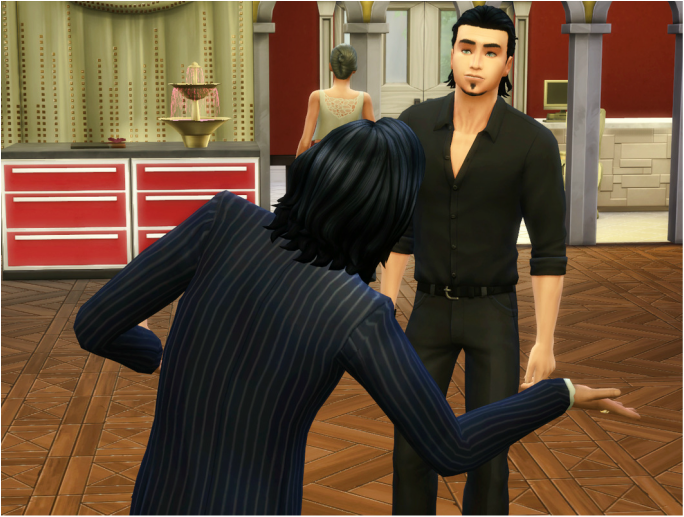 ﻿
Tony returned to the Heffners and was greeted by a very angry young man.

Brian: "You think it was smart what you did? I don't know what kind of dispute you have with the Castelli family, but don't drag my sister into this, mister! You humiliated the hostess in her own house and you put Beryl in the middle of it!"
Tony: "You don't know what you are talking about, young man. Your family being invited here was a well-plotted move itself on Marissa's part.
Brian: "And so you decided to retaliate. To pour more oil into the fire. Seems to me you leave only hurt in your wake. Are you good in anything else except making enemies?"
​
Babs: "Brian!" 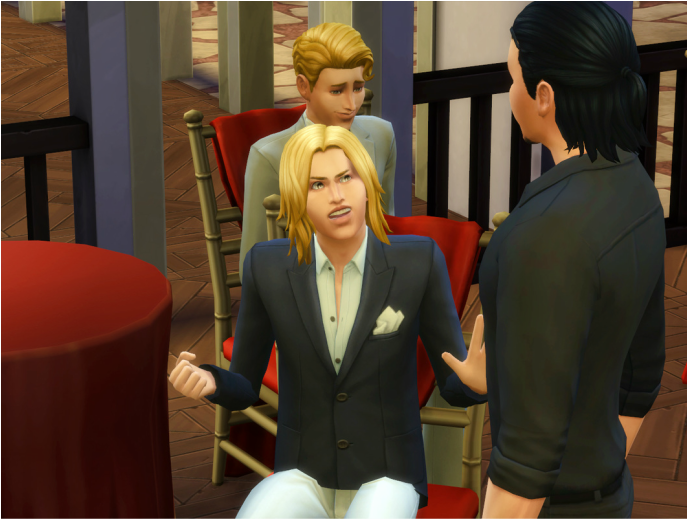 Tony: "Funny you're asking, because I remember a certain baby Brian in a dirty trailer in a desert being held by a group of filthy thugs. It could have ended up for you there, you know."
Brian: "Well, you claimed your reward for that, didn't you? Should I tell your son what a selfish and dastardly father he has? But that would crush his poor innocent soul. Hopefully, he will grow up into a more responsible and worthy man than you!"
Beryl: "Stop it! Both of you! What's got into you, Brian?" 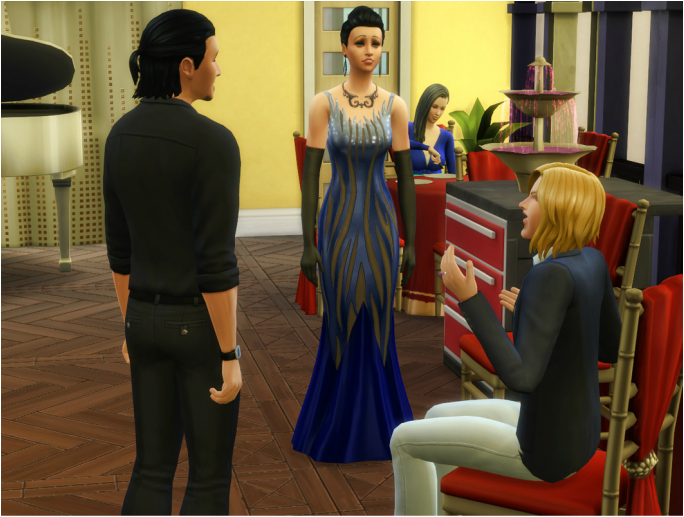 Brian: "Maybe I got tired of pretending that I'm not aware of what this man actually is. Excuse me, I need some fresh air." 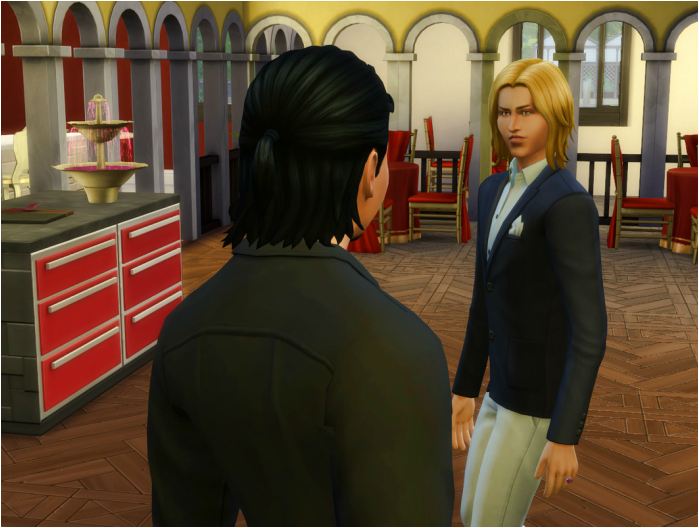 ﻿
Brian went outside to calm down. His brother soon joined him there.

Bradley: "You really gave it to him back there, bro. Never seen you so angry before. The guy's a moron."
Brian: "Yeah, I think I got carried away a little."
Bradley: "But everything you said there was the truth! The man has been using our sister from the moment they met!"
Brian: "He's a shady character, that much is obvious. He keeps messing Beryl's head up.  She's still in love with him and thus vulnerable to him. We must protect her. And Chris too."
Bradley: "Yeah. You are so smart, Brian. The things you come up with... those would have never occured to me."
​ 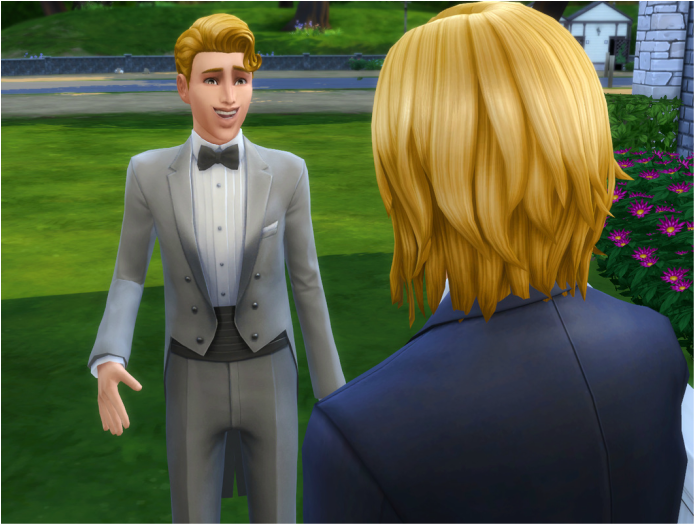 Brian: "Because you never stop for a while and think about them. Take these people for instance. We don't even know them. Why did they invite us here, I mean really? Your usual rich snobs don't invite outsiders like us to their parties. And next thing you learn is, that the hostess is hopelessly in love with the same man as our sister."
Bradley: "Whoa, she is? Now it makes sense that she was so furious at me."
Brian: "And yet it was her who invited our family to this event. We are like pawns in their cruel game, brother. And pawns get sacrificed first before the kings and queens clash."
Bradley: "We must remain vigilant."
Brian: "That's exactly what we're going to do." 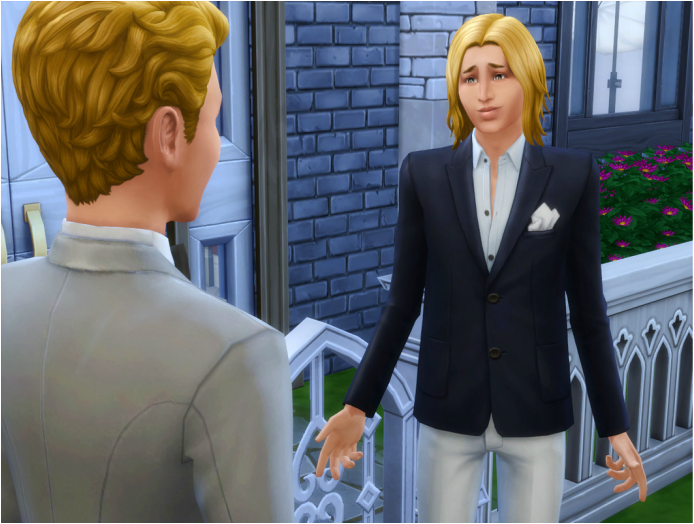 Soon it was time for everyone to leave for their homes. Dr. Angel caught up with Beryl at the entrance and they exchanged phone numbers.

Dr. Angel: "We'll do great things together, you and me and Mr. C over there." 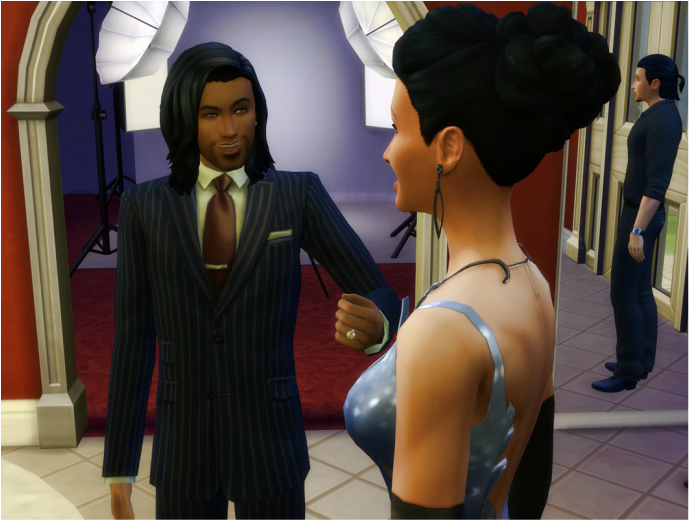 Beryl: "You didn't have to buy my picture, Tony, to prove anything."
Tony: "I didn't. I bought it to have you in my house forever."
​
Brian: "Are you coming, Beryl? Everyone's waiting for you in the car.
Beryl: "Just a minute, Brian."
Tony: "I could give you a lift, if you want."
Beryl: "Oh. Brian, go without me then. Tony will take me home." 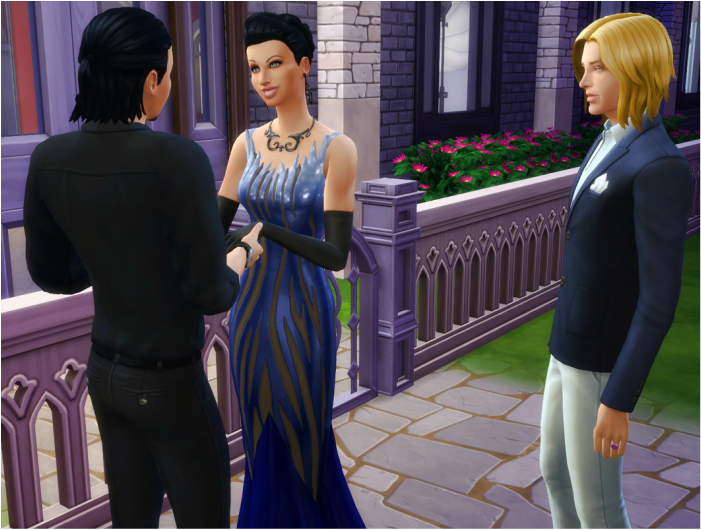 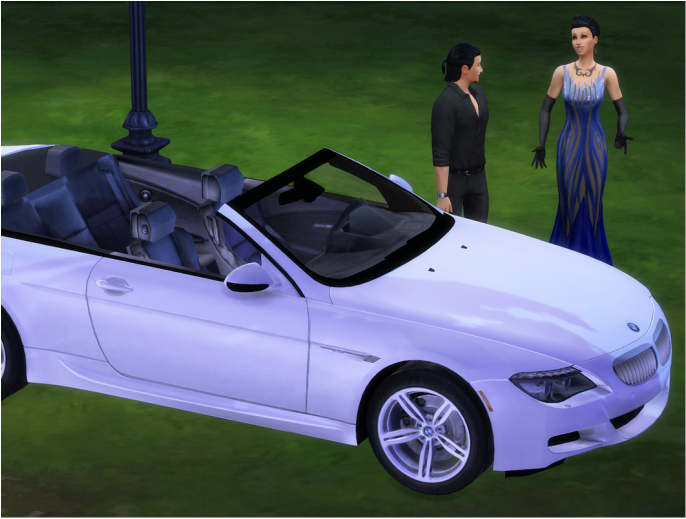 Beryl: "If I like it? What question is that? I freakin' LOVE it!" 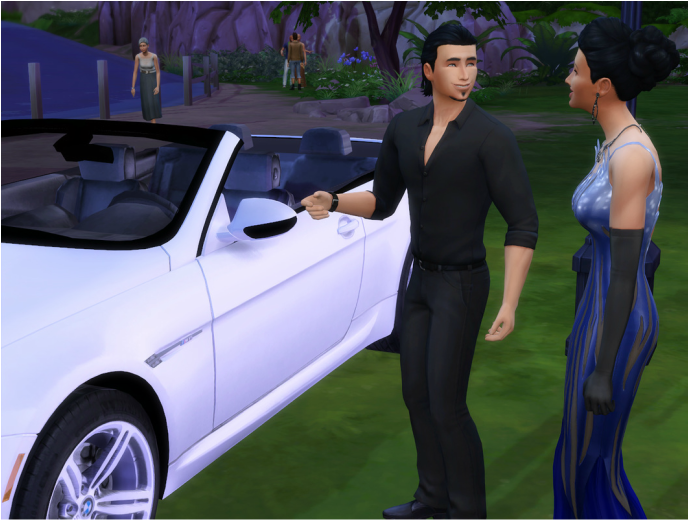 Tony: "So, would a lady accept an offer from a humble chauffeur to drive her home?"
Beryl: "Tony Corleonesi, you're anything but humble. And yes, the lady would accept." 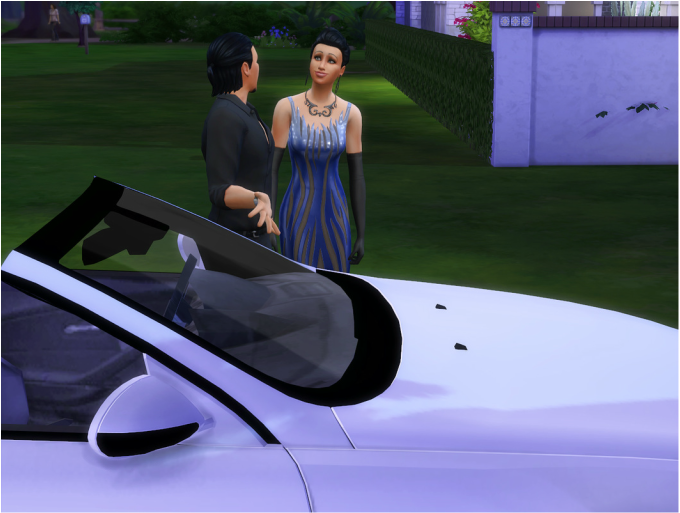