​Carl was accepting hugs and congratulations and pattings on the back from everyone. His long-desired day of retirement has finally arrived. 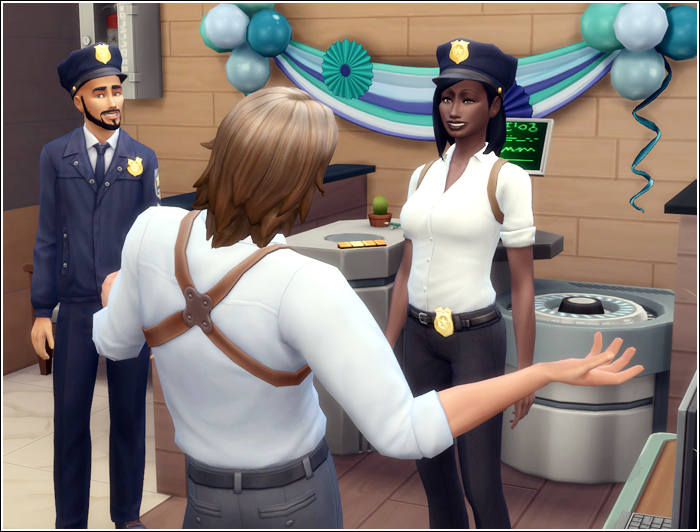 From now on I'll be having no permanent partner. I knew that the chief wanted to team me up with Alvarez, but I hoped he would reconsider, because it wouldn't work. I had a history with Alvarez. We used to be an item before she transferred from Willow Creek. It didn't end well. I wish I could erase those two years from my mind. 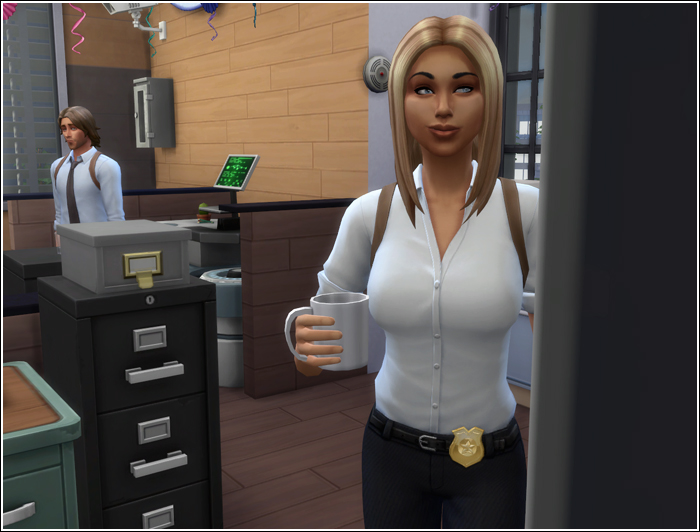 I watched young Chris Heffner offering his gratulations to Carl. Carl didn't like Chris. He was old school and all the publicity the young man was attracting irritated him. And then there was the matter of Chris' father that was a thorn not only in Carl's side. He kept saying Chris couldn't be trusted. We had had a heated discussion about it several times, because unlike Carl I didn't believe in the genetics and that the young man would stray off the straight and narrow eventually. However, it's not Carl's job anymore to worry about it. 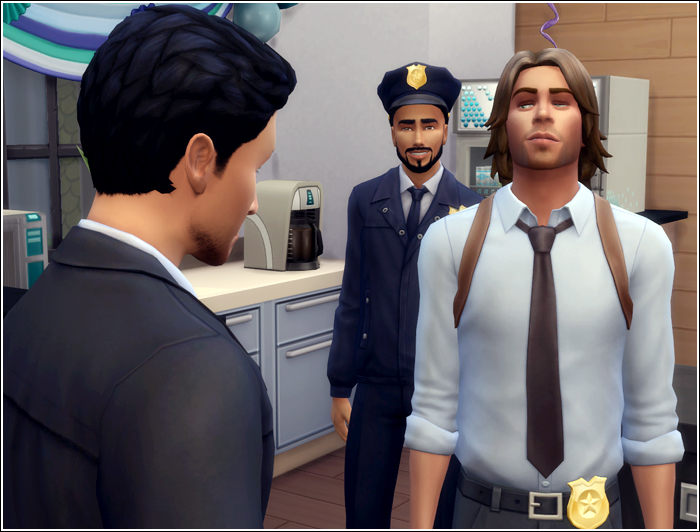 Chris was still inexperienced, but he was making it up with his enthusiasm. I knew why he joined the force. Those like him who lost a family member due to a crime often made the great cops. I was keeping an watchful eye on him and I was considering taking him under my wing. I won't deny it, after six years I still felt responsible for the whole situation that resulted in him ending up in our ranks, but it wasn't the main reason I wanted to work with him. He was driven. He was meticulous in his reports and on the few occasions I had him assisst me at the crime scene and take statements from the witnesses I was really impressed with his work. He asked the right questions and he seemed to have a talent for making people remember plenty of details. Which in all cases helped us catch the perpetrators pretty quickly.

​What baffled me was that he hasn't been promoted yet. How could the chief miss this? I'll probably have to touch the subject next time I talk one on one with him. 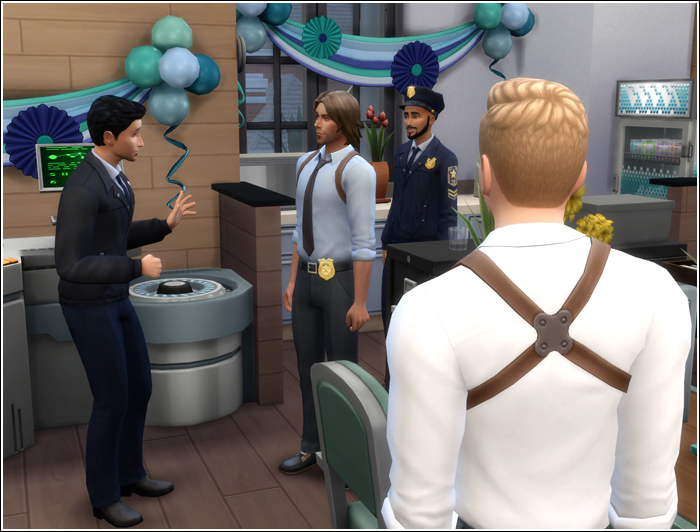 "Hey, Chris. How's it going?" I greeted him when he came my way. "Heard you made another arrest this week. Good job."

"Thanks. It was just a small fish, nothing as big as what you guys bring in."

I could hear it in his voice how much he longed for the promotion. "Hey, patience, Chris. They didn't build Windenburg in one day either. You'll work your way up in no time with your enthusiasm. Just keep on the good work. Have you checked the info on the Deductive Reasoning, Inductive Reasoning and Quantitative Reasoning tests I sent you? They're part of the Advanced Police Analytical Thinking test you'll have to pass to make a detective. It's never too early to start practicing."

​"I haven't had time to read it more thoroughly yet, but hopefully I'll get to it tonight."

"Excellent! If you have any questions, just give me a call. I'll be happy to help."

"Thank you, Terry, I really appreciate what you're doing for me. I know you don't have to."

"Don't mention it. How are things at home, by the way? Everything okay with Kellie and the little one?" 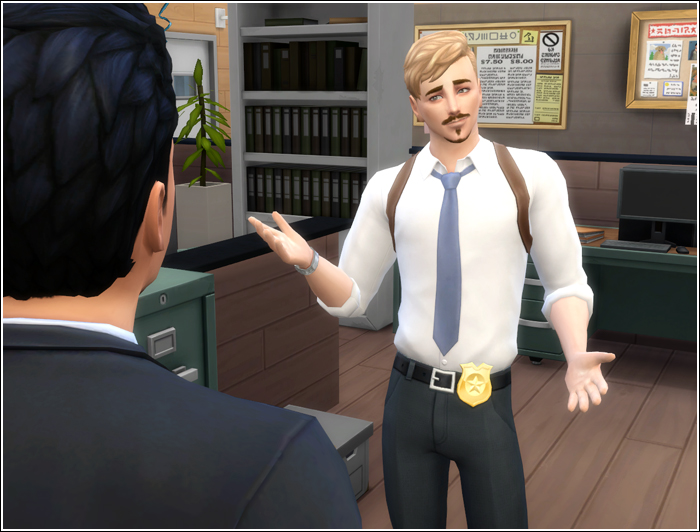 "They're fine. Kellie gave me a lecture about my life and duties the other day."

That sounded all too familiar. "Sisters, huh? I've got one too. Five years younger than me. She's married with three children and for some reason she thinks it gives her the right to tell me what to do with my life. Why do they always think we have to keep up with them when they get married? Each time I visit I hear it over and over again, 'Are you seeing someone, Terry?', 'When will you start a family, Terry?', 'It's a shame you're still single at thirty-three, Terry.' Because of that I only visit her on holidays."

"Thankfully, I'm spared of that for now," Chris said.

"Is your sister still with the same guy? What was his name? I met them in the park some time ago."

"Yes, Thomas, I remember him. I hope he treats her well."

"He worships the ground she walks on, which is rather emasculating, if you ask me. I don't think he's a good match for her, she needs someone more interesting than a businessman from a long lineage of businessmen. She's a scientist and a genius after all. But he's been her friend for years and Kellie is not exactly known for her decisivness when it comes to relationships. I'm afraid she might even agree to marry him not to hurt his feelings. Someone should open her eyes before it is too late." 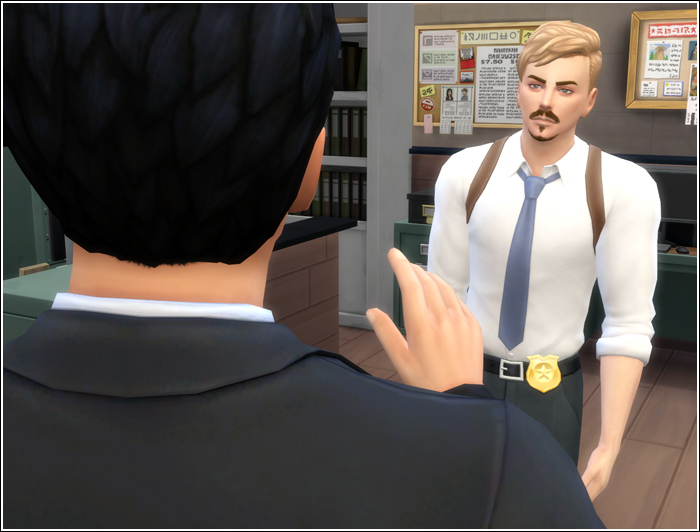 It fitted the image of Kellie I had in my mind perfectly. Self-sacrificing, that's what she was. "Isn't she still young for a marriage?" I asked.

Chris shrugged. "Twenty three, it's not too young. I'm pretty sure Thomas will want to tie the knot as soon as possible, if he gets the chance. The only thing that could save Kellie is her career. She loves her job more than anything."

Twenty three. There you have it, Terry. Another reminder that you should stop thinking about her. Why would she give a damn about such an overworked old cop when she can have any younger man with less health issues than you have?

"Listen, Terry," Chris said, "it was great chatting with you, but I have to go now. I need to check if the Chief already signed my request for extra shifts next month."

"All right. Just don't wear yourself out, Chris." 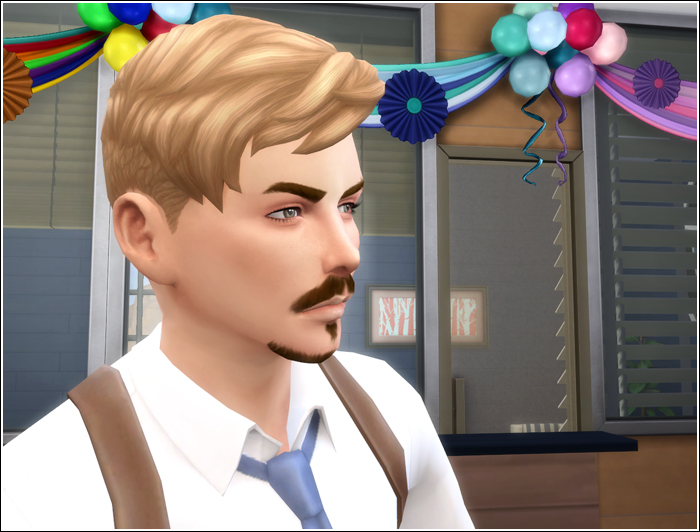 I joined Carl, together we sat down and reminisced about our weirdest cases. Carl was laughing at something I said when we suddenly heard raised voices coming from the Chief's office. The door was closed, but we could see chief Johnson and Chris Heffner through the transparent walls. They were both standing and gesticulating angrily and shouting, but I couldn't pick out the words, as they were muffled by the bulletproof glass panels. What is going on in there? I thought. I couldn't remember when was the last time I saw the chief so mad. Chris was in serious trouble. What, for Watcher's sake, did he tell him to piss him off like this? 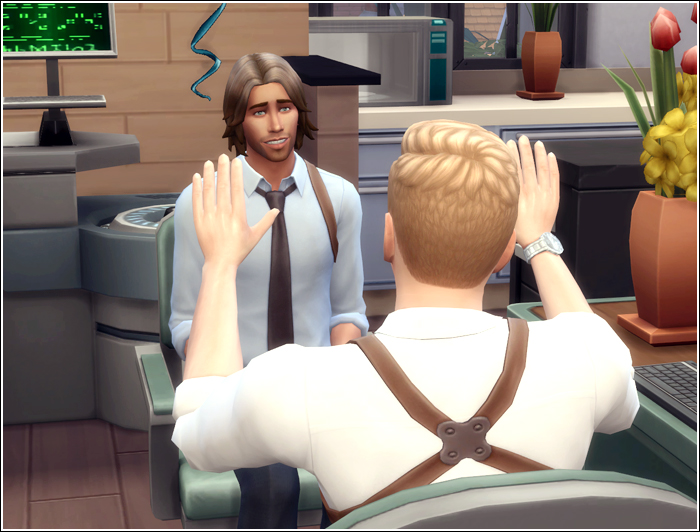 "Well, it didn't take long for the rookie to get in Chief's bad books, did it?" Carl observed.

"It must be a misunderstanding," I said. "Chris told me he only wanted some extra shifts signed."

"I doubt the chief would fly off the handle like this because of a little extra work. I have no clue what he did, but the boy stepped in the shit."

​I could only shake my head. This was crazy. 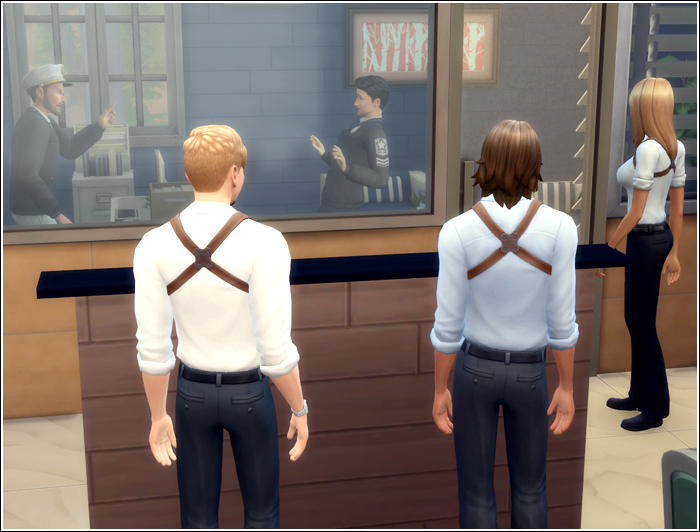 ​Few moments later Chris stormed out of chief's office and headed to the door. I stopped him before he left. He truned to face me. His face was still red with anger and probably shame too, but I could also see tears in his eyes. "What just happened, Chris?"

He gave me a sarcastic smile. "See this uniform?" he said. "Turns out I'll be wearing it until my own retirement. It also means I won't be needing the info about the tests you sent me."

"You're not making any sense, Chris."

"I won't be promoted to a detective, Terry. Never. I won't make it past the corporal rank."

"Is that what the chief told you? Is it because of the argument you just had? He wouldn't do that, trust me."

Chris looked me in the eye. "It's not because of the arguement at all, Terry."

Then it dawned on me. "It's because of your father, isn't it?"

He forced another faint smile and turned to leave. "Good night, Terry." 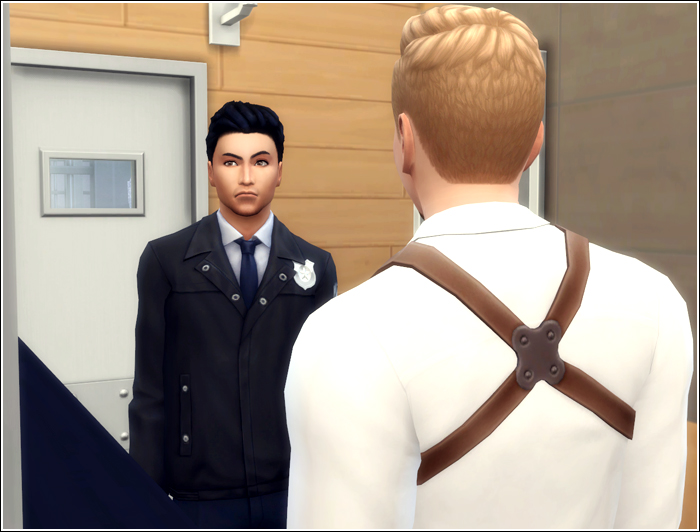 ​I still couldn't believe what the chief told me. I was working so hard to prove myself and in the end it didn't matter at all, because there was a large stain on my name. The stain of my father and there was no way to remove it. He's been ruining my life since I was born. I did all I could to get rid of him. I didn't answer his calls and texts, I haven't seen him or talked to him for seven years. And yet he managed to ruin my life and my future. Will I ever be able to escape his shadow?

I was told that me becoming a high ranking police officer is undesirable by some of the superiors and certain members of the city council. They must hold a grudge because I deprived them of the right to vote for our family heir. I could still hear the chief's condescending voice, "I'll be honest with you, Chris. You have to understand that with your face you keep reminding everyone around here that we failed to catch the most wanted criminal. And some of us are still concerned about your loyalty. We just can't risk letting you near any sensitive information such as where our undercover officers are positioned."

I lost it when he insinuated that I might become a dirty cop and leak information to my dad. I know I shouldn't have started yelling. He suggested I could get transferred to another town in another state where my father is not so notorious yet. "I can't move out of Newcrest!" I yelled at him. "My family legacy is here!"

He shrugged. "Then you need to get your priorities straight, young man."

I felt so powerless and angry. What were my options? Walk the streets forever or find another job. I didn't even change from the uniform, I just wanted to leave the station for I was sure I would suffocate there. 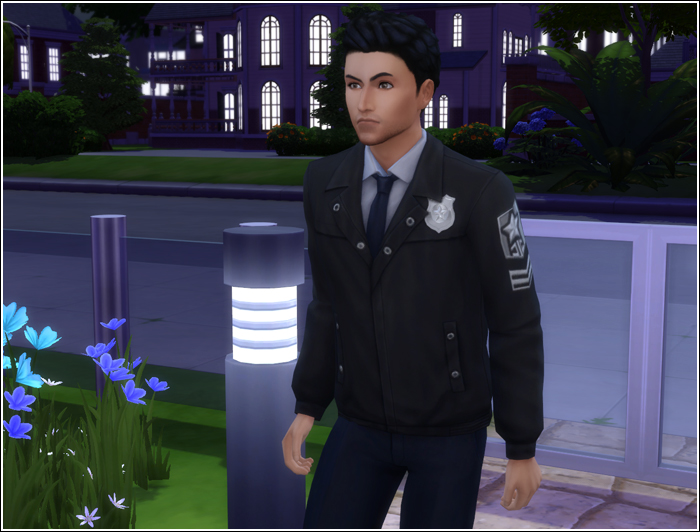 I half expected Kellie would still be mad at me because of our argument two days ago, but thankfully she wasn't.

"What happened?" she asked me when she saw my face.

I really didn't want to unload all the crap I was dealing with on her. "Bad day at work," I explained briefly.

"Oh. I'm sorry," she said. Then she grabbed me by the arm and led me to the table. "Sit and eat. Food will make you feel better," she ordered. "Let's have a dinner as a family once again." 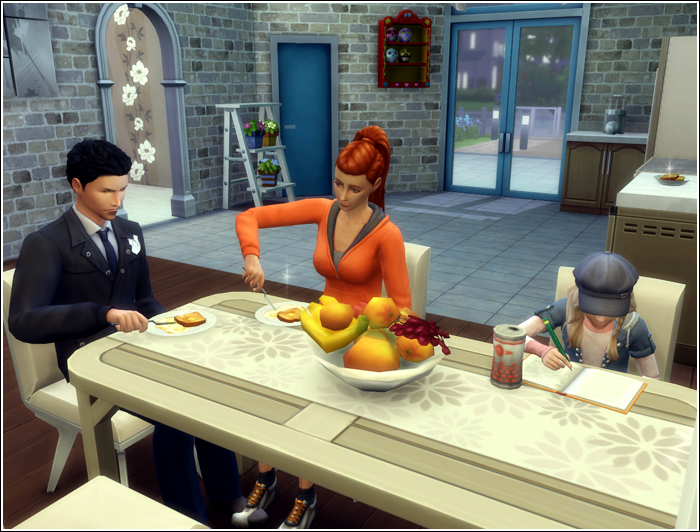 ​The food didn't make me feel better, of course. Only Kellie can believe such things. In my head I was still screaming over this grave injustice I'd become a victim of. From the beginning I worked harder than any cadet. I was best in my class, because I had purpose, I needed to be able to choose where I'll be stationed, I wanted it more than everyone else did. And now everything was ruined because of stupid old prejudice and grudge. Why did everything in my life have to be so damn messed up? There has to be a solution to my situation and I swear I will find it. 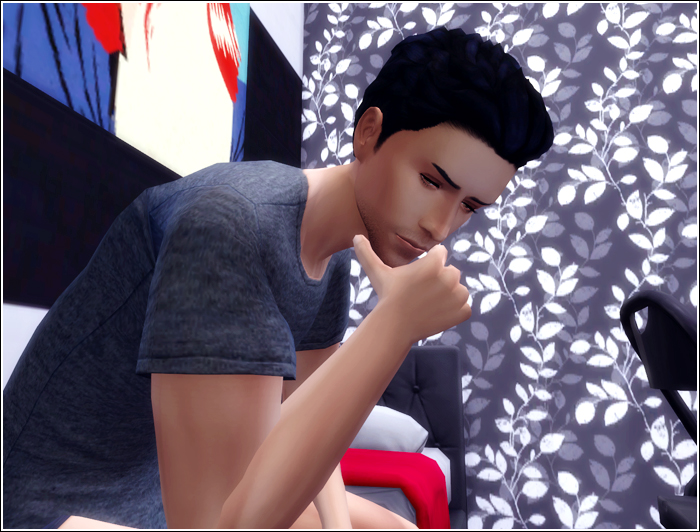