My name is Quido Heffner. I volunteered to help build Newcrest. Not that I owed anything to the community. On the contrary. However, I want to make a difference. I want to be part of something bigger, I want to create a new community of people who really care and help those in need, especialy kids.
People say I'm good looking. I don't know about that, I remember being quite ugly and fat as a child. I guess I still view myself that way.

I never learned who my parents were, I lived in an orphanage in appaling conditions.  The community didn't care, no authority ever visited to check on how we lived and trusted the married couple who were running the place. I remember being always hungry and scavenging for food.
There was a boy, older than most of us, his name was Corey. He was an orphan too and he was looking after us. One night he came to me and told me he's leaving the place and if I wanted to come with him. Of course I did! Me and two other kids joined him and we would never come back. 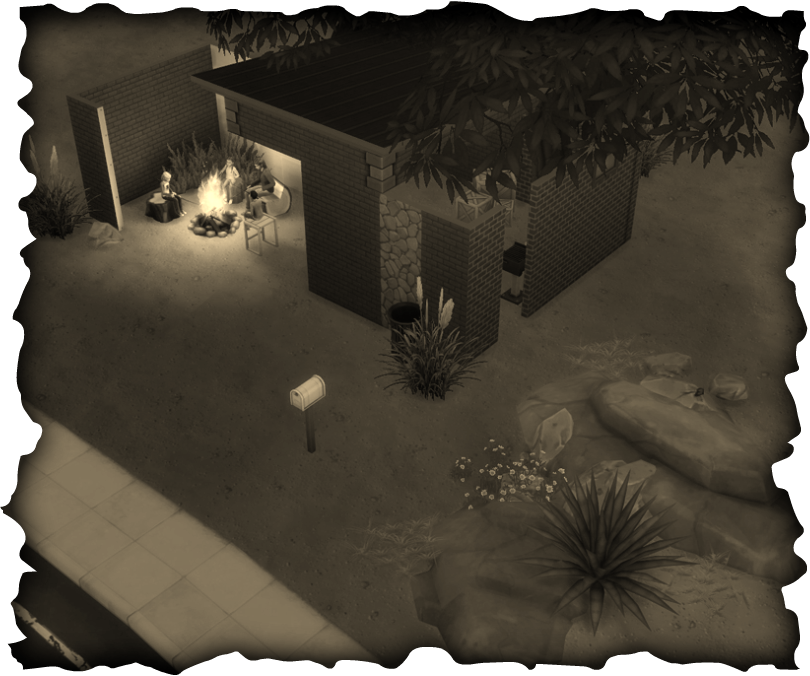 We managed to get to a town called Oasis Springs and found ourselves an abandoned building (it probably used to be a public bathroom long time ago before this part of town became unpopular to live in) and we settled there. Corey was a teenager and he promised as soon as he has aged up, he would get a job and provide for us and keep us safe. We just had to survive until then. 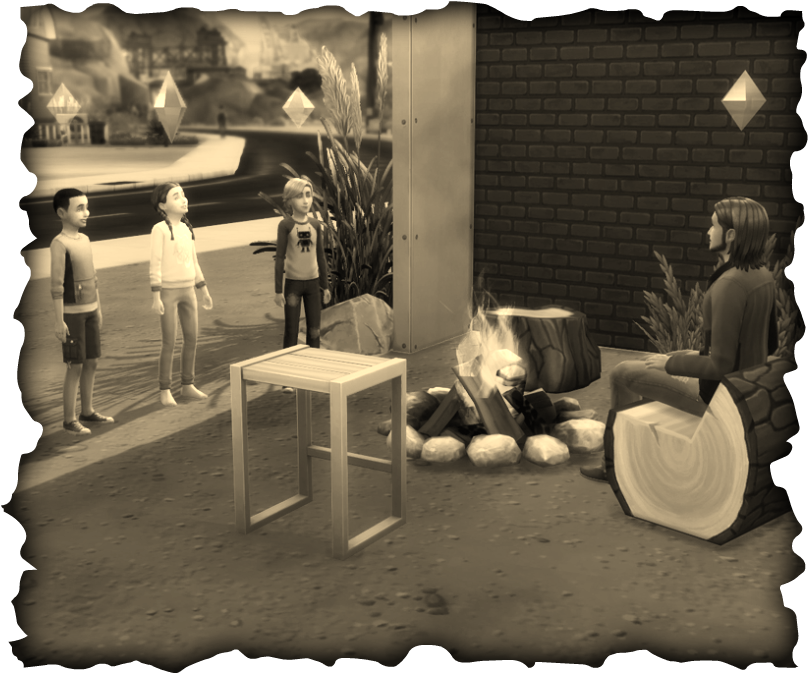 Hey, Corey, guess what we found! Almost intact sofa! It has few dark stains on it and a wobbly leg, otherwise it's all right. We can bring it here after dark. 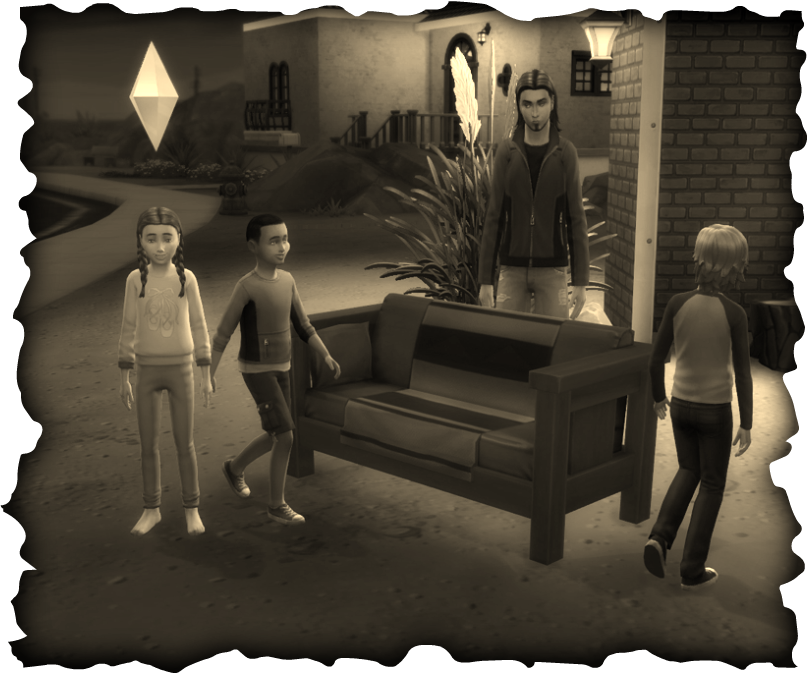 It's actually pretty good sofa, guys. Who's gonna sleep on it tonight? 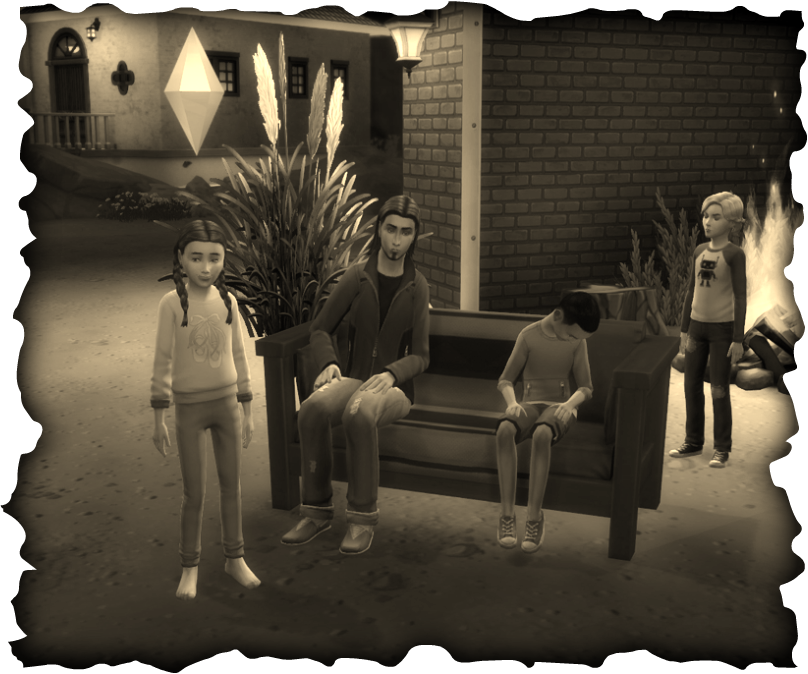 One day each of us will have a decent bed, I promise. 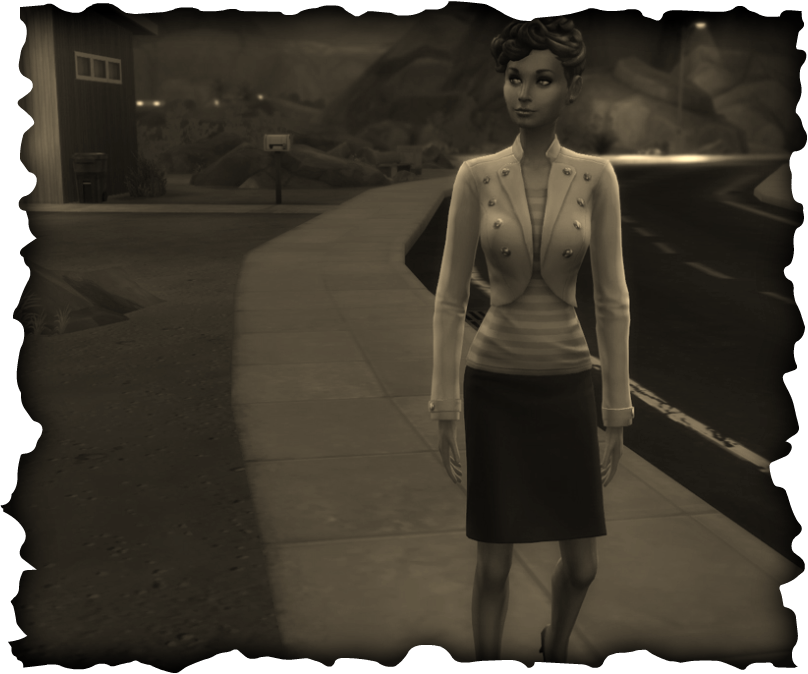 We thought we were doing quite well on our own. But Corey wasn't supposed to age up nearly for two more years and who knows what would have happened to us by then.
Thankfully, Alice found us.
She was walking home from work one night when she spotted the glow of our campfire. Curious she went to check it out. 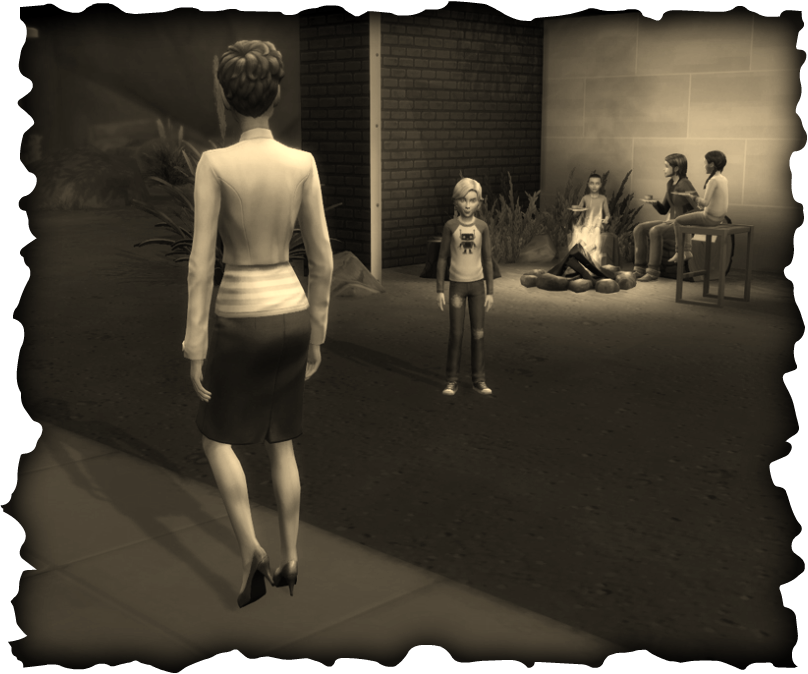 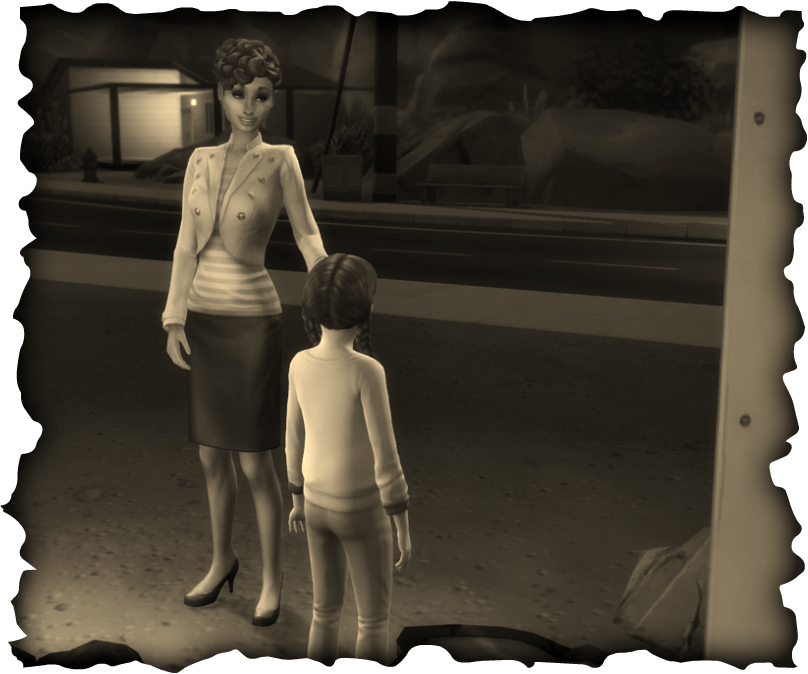 Alice: Hey, guys! What are you doing here?
Elisa: We live here and hide from bad people.
(Elisa accidentaly revealed the truth, before any of us could stop her. She gained the insane trait while living in the orphanage and wasn't always thinking clearly) . 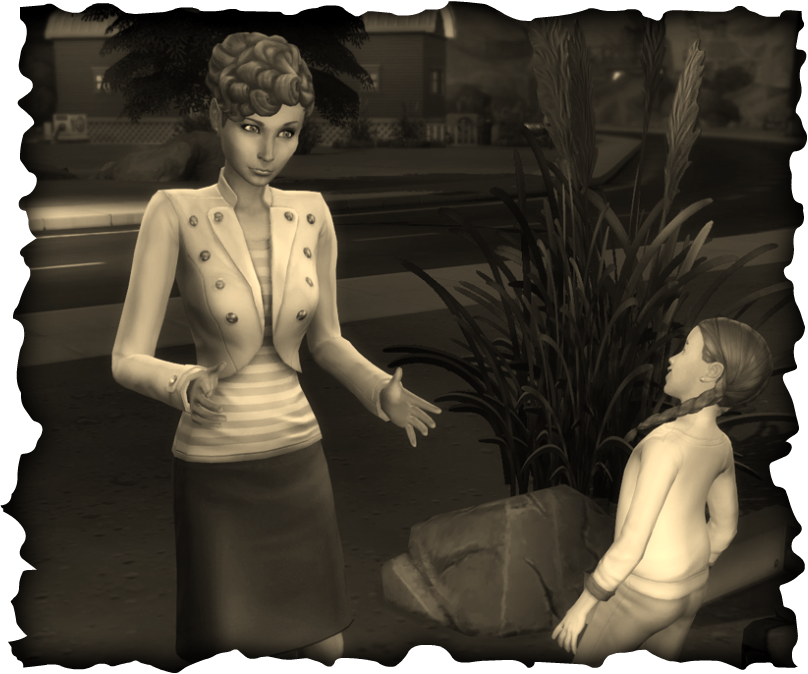 Alice: You what? Tell me you are kidding. 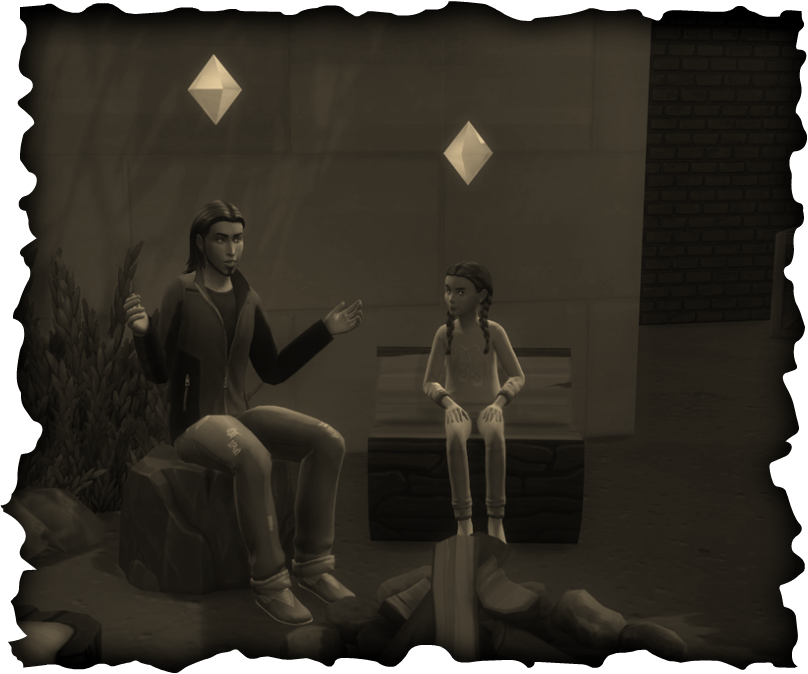 And so Corey told her the whole story, once the truth about our shelter was out. 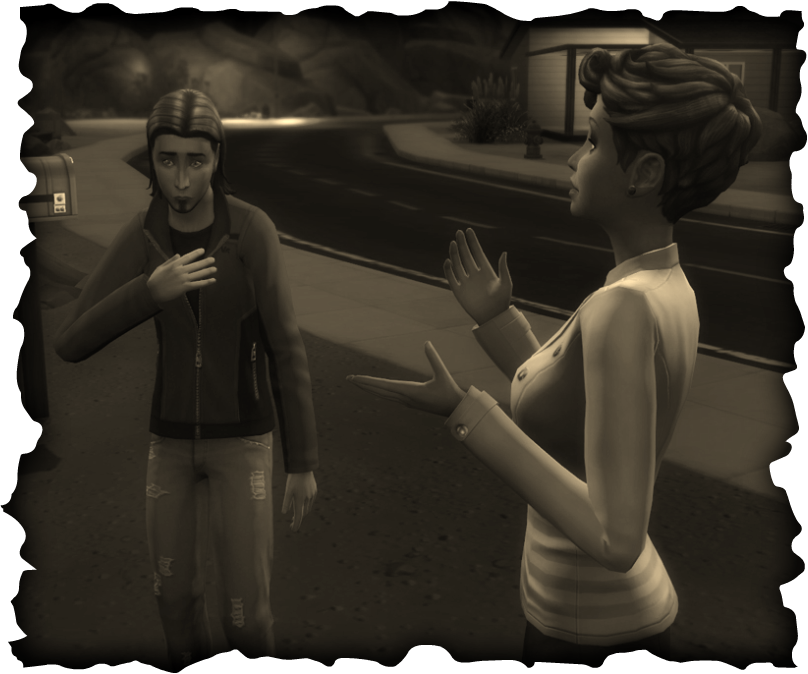 Alice and Corey had a private talk. Later we learned that she told him we couldn't live like this anymore.
Corey: Please, madam, don't call the Police. We can't go back to the orphanage. 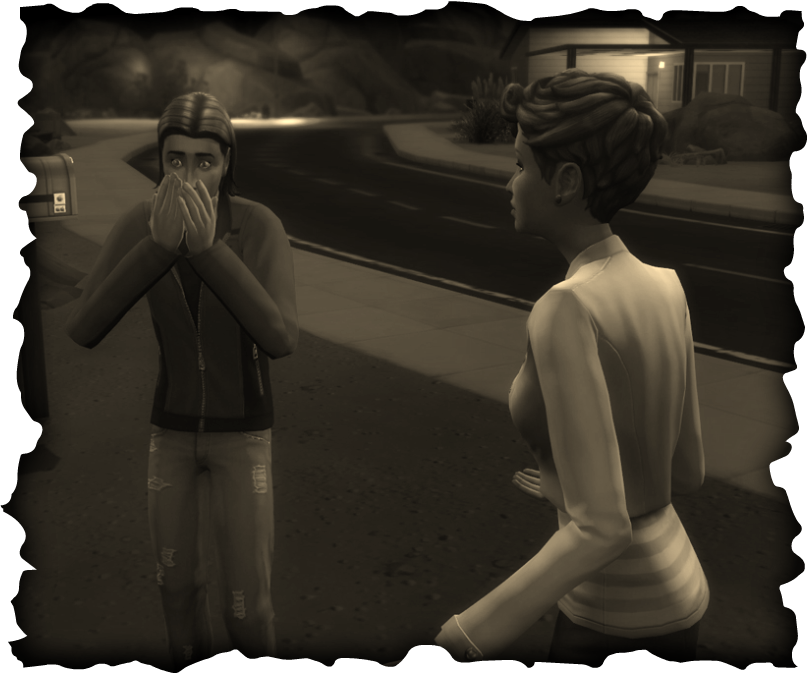 Alice: All four of you need decent food, new clothes, education, proper health care... What if one of the little ones got ill, injured or even died, Corey? You would blame yourself for the rest of your life.
Corey: I... I didn't think about that. 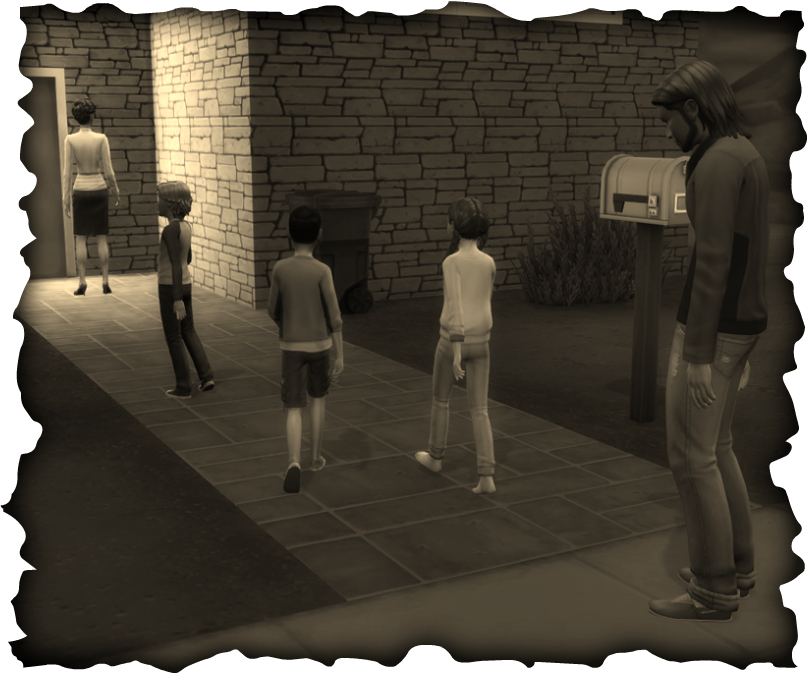 And just like that Alice took us home with her. Corey was still pretty shaken up from the talk with Alice and didn't say a word on the way to Alice's house. 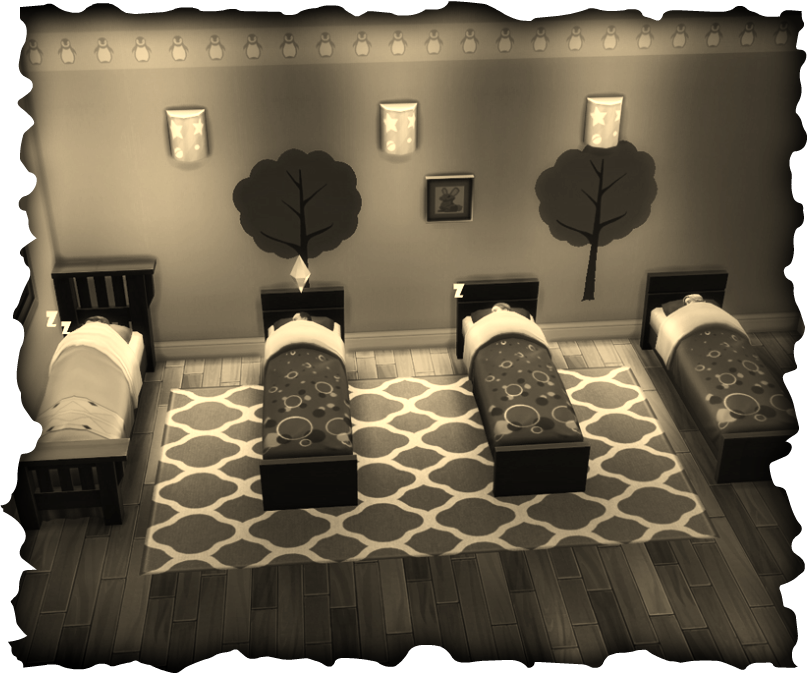 For the first time in months we had a good night's sleep. I guess we all were tired of hiding after all. Finally it was over, one way or another. 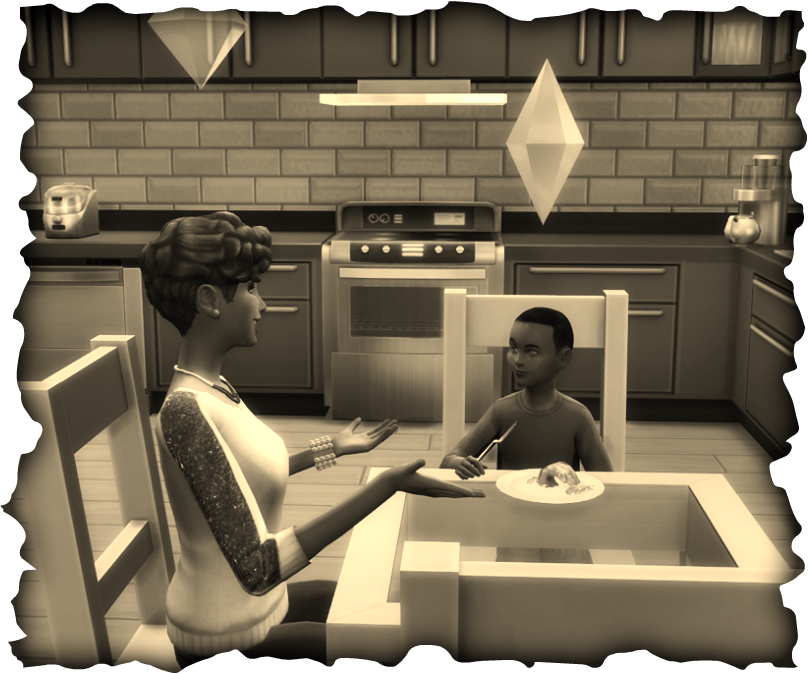 We got hot meal and Alice signed us up for school. At the breakfast I heard about legacy for the first time. Alice came from a legacy family, the Leonis. 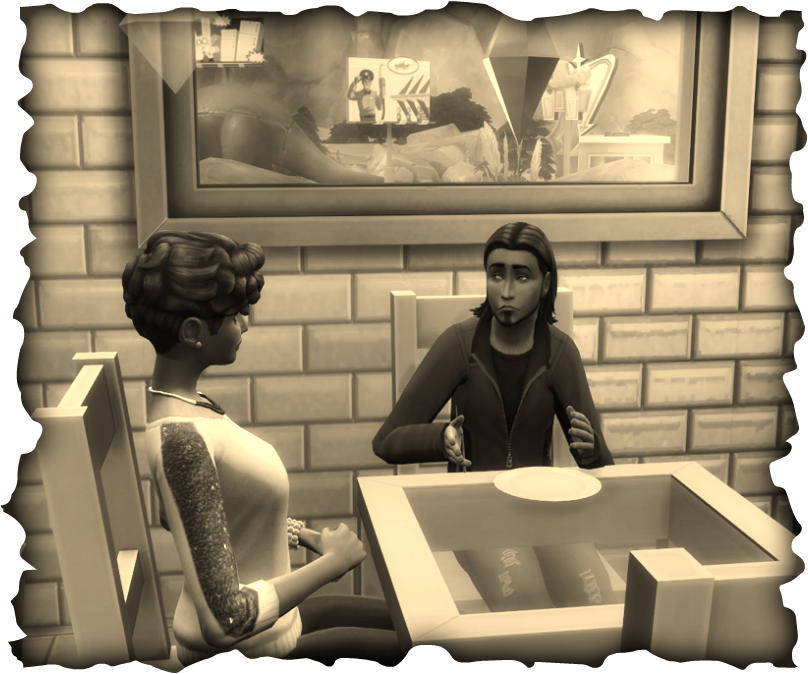 Corey: So, when are you sending us away?
Alice: I'm not. I have adopted you.
Corey: All of us?
Alice: Well, yes. I wanted a big family anyway. I guess this is a shorcut. (She smiled) 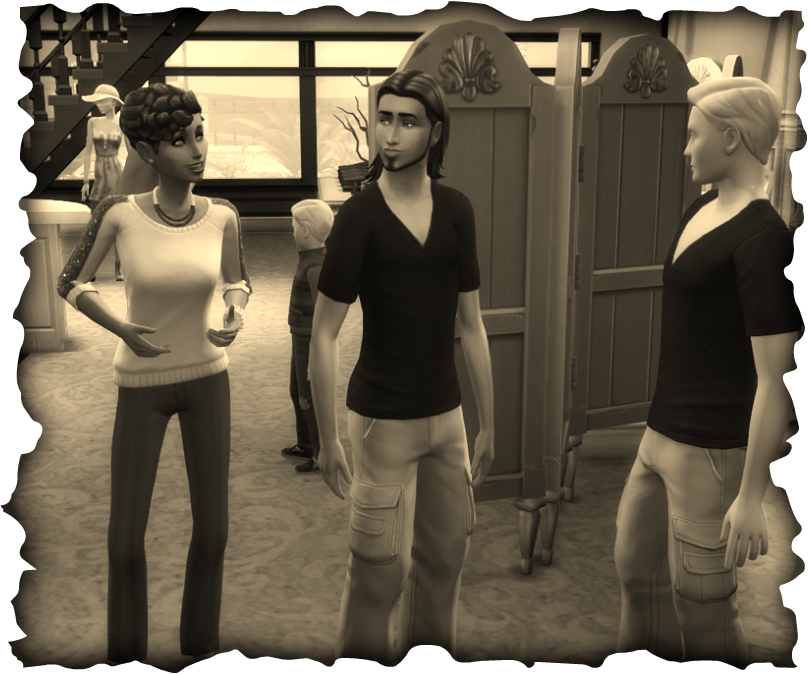 At the weekend we went shopping. 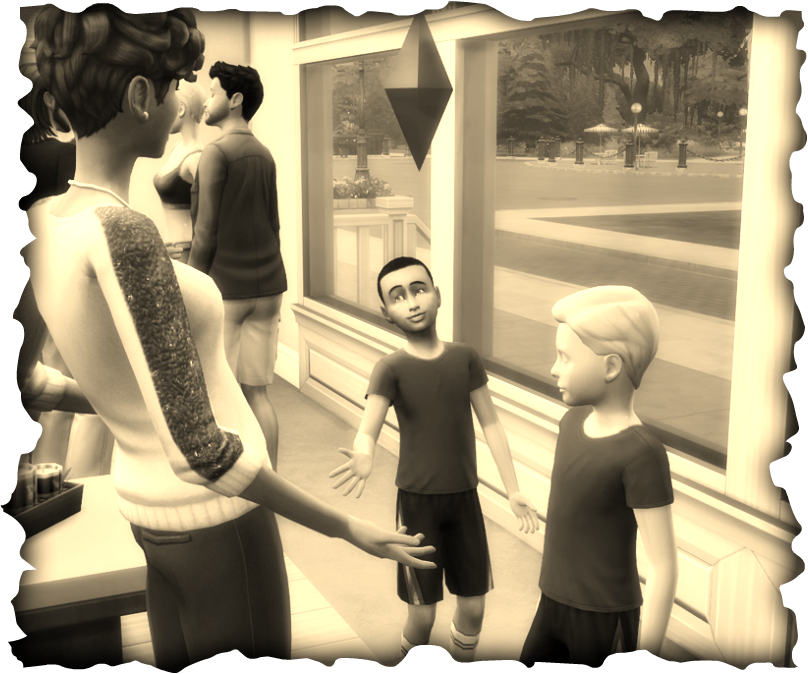 Each of us got new clothes. It was like Christmas. 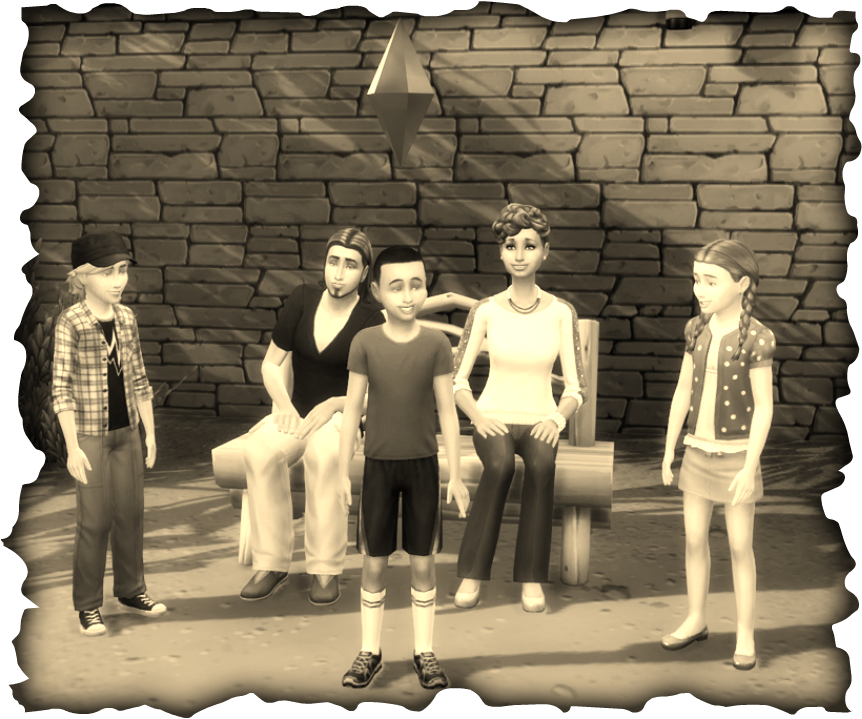 Alice was an angel. She saved us. All of us absolutely adored her. 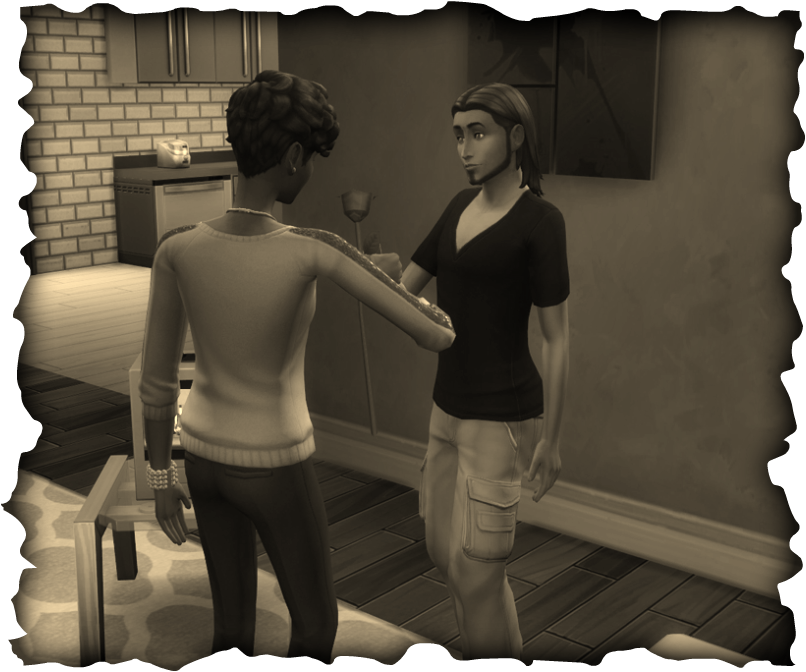 Some of us more than others... 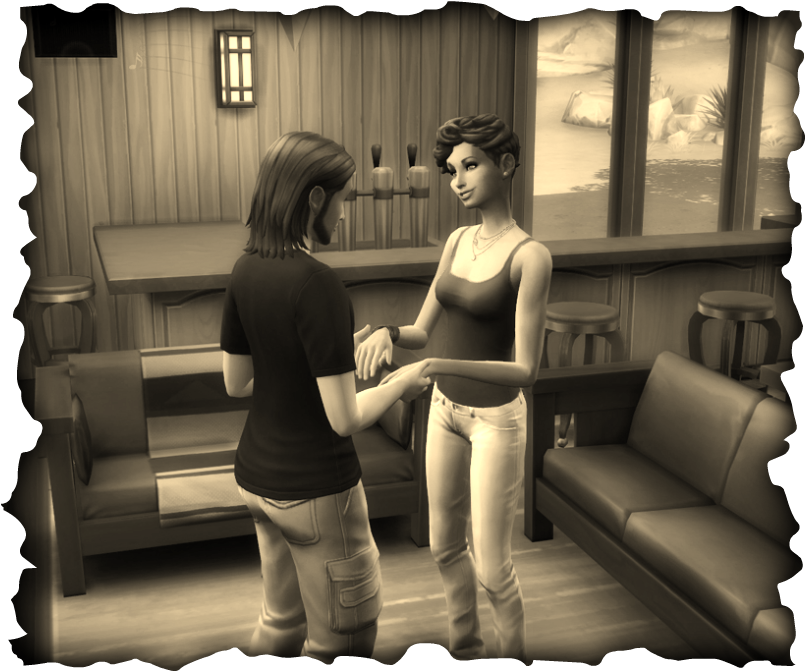 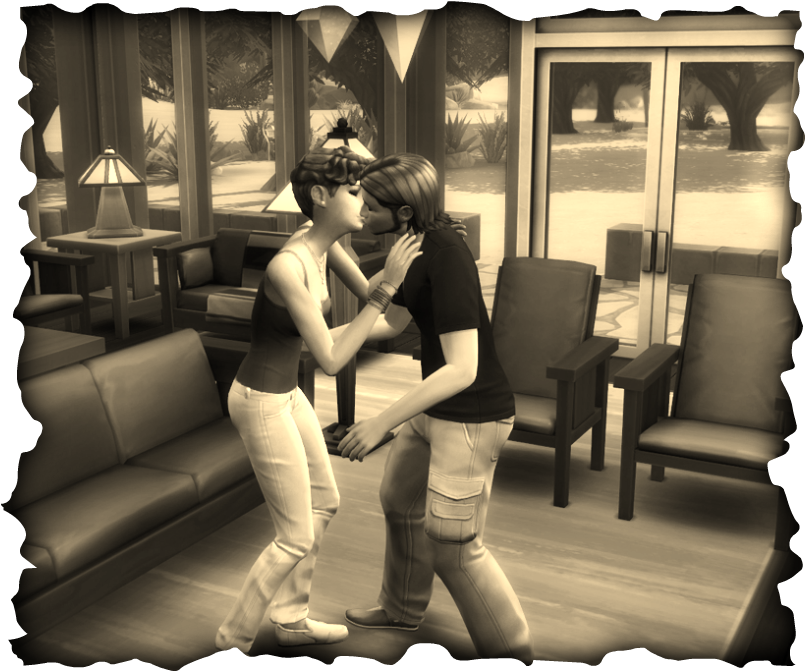 I guess they were meant to be together. Both of them were good people, always trying to help those in need. 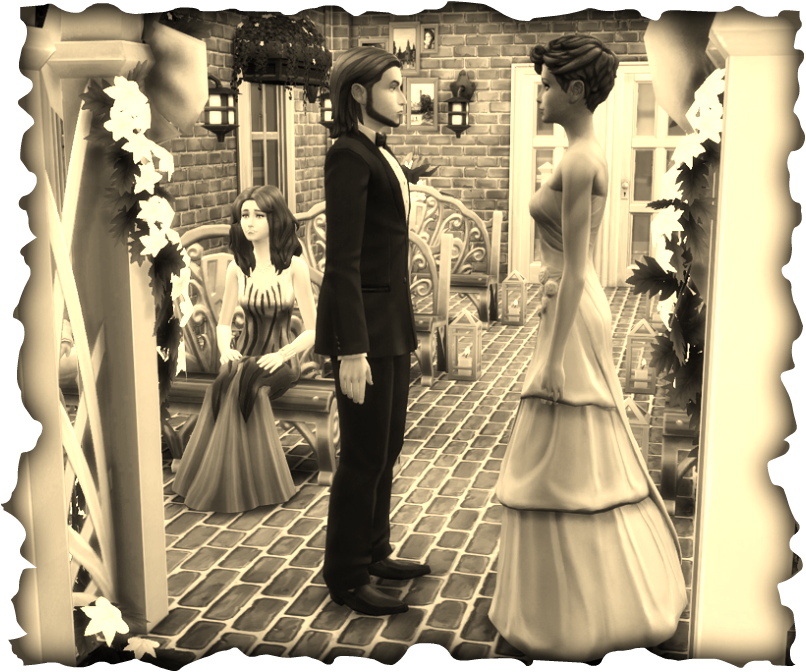 The wedding bells were just a matter of time. When we kids have aged up to teenagers to be precise. 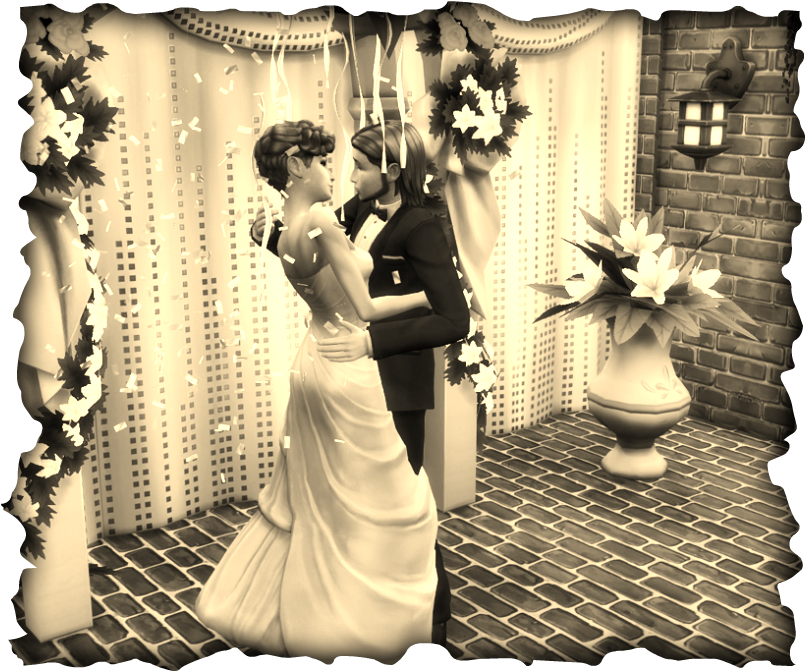 The ceremony was beautiful. Everyone was happy for Alice and Corey. 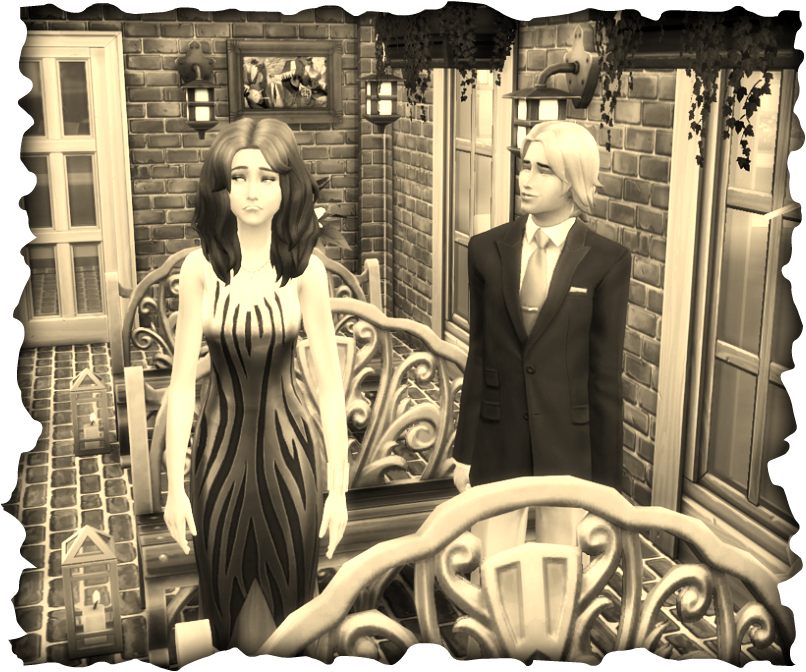 Maybe except for Elisa. I suspect she had been in love with Corey for years and seeing him marry another woman just broke her fragile heart. She's been having more insane episodes since then. 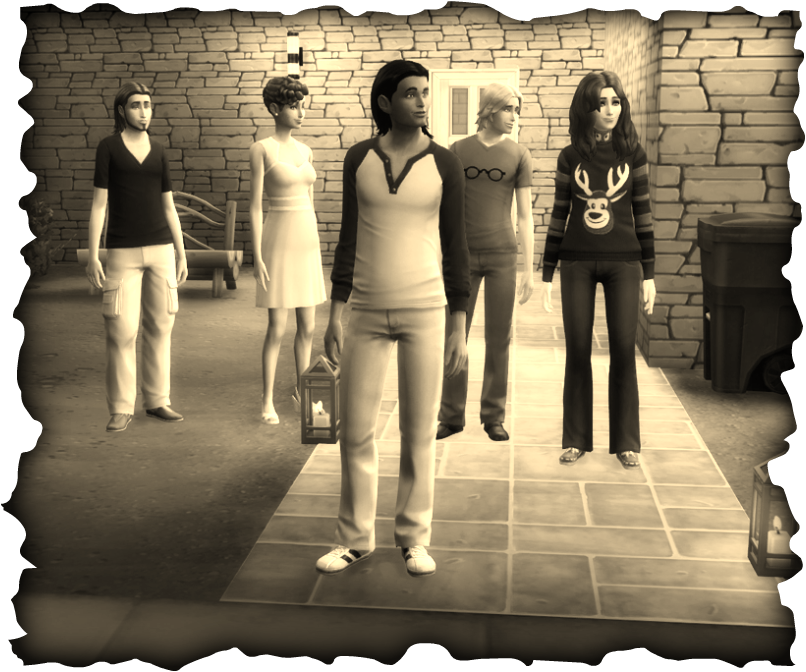 But that's how life works. Speaking of life - by the time Alice and Corey were expecting their first baby the three of us kids have become young adults. And it was also time for us to leave the nest and start our own families. 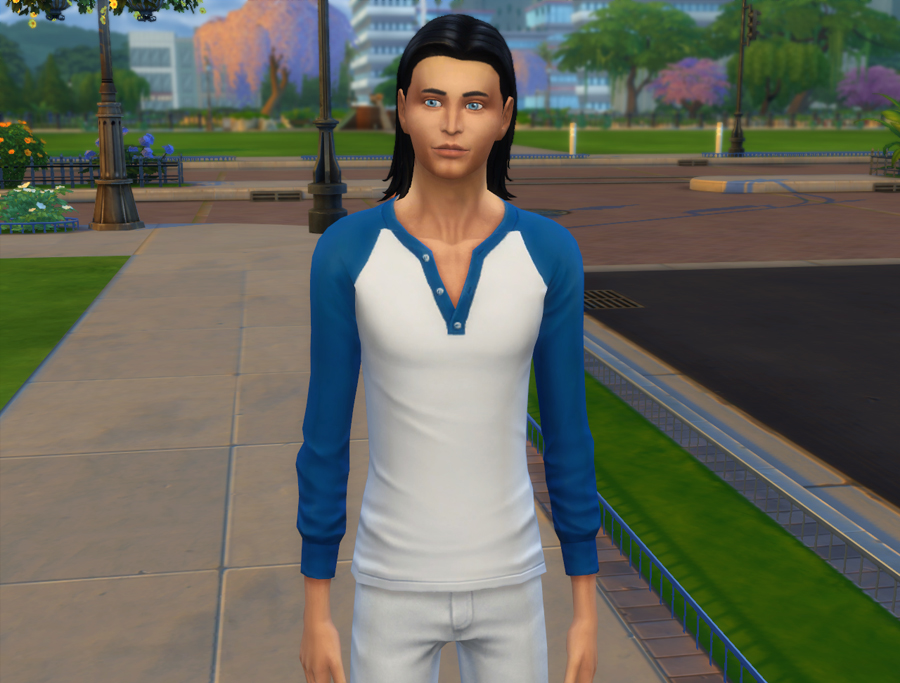 And here I am. Ready for the great unknown called LIFE. Let's hope my being in this world will leave a good mark.