WARNING: This chapter might involve guns, fighting, blood and dead sims and urns. Skip, if you can't stomach it.
Things you'll miss, if you skip this chapter: Tony "Meatball" Corleonesi in action at last, funny conversations (probably), special appearance of The Reaper himself (not giving authographs this time, thank you), saving babies and punishing criminals (most probably).


Tony and Beryl kept spying on the unlikely couple. Tony was waiting for the right moment to throw himself into action...

Tony: Looks like they're leaving. Correction: he's leaving, she's staying. That's three of them to deal with.
​Alright, time for me to go. 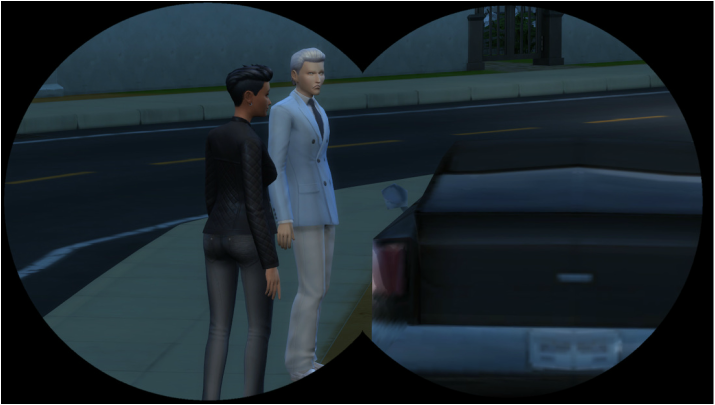 Tony: Stay here and don't follow me under no circumstances. You are not a little girl, Beryl, and this is no game. I need you to do exactly what I'm telling you. Stay here, until I come for you. If I don't return within an hour get back to the car and call the Police. Can you do that?"
Beryl noded. She couldn't speak, her throat tightened with sudden fear. He was right, this was not a game at all. He's going into a house full of dangerous people alone. Whatever she might have said or thought about this man, she didn't want him to get hurt or even die. 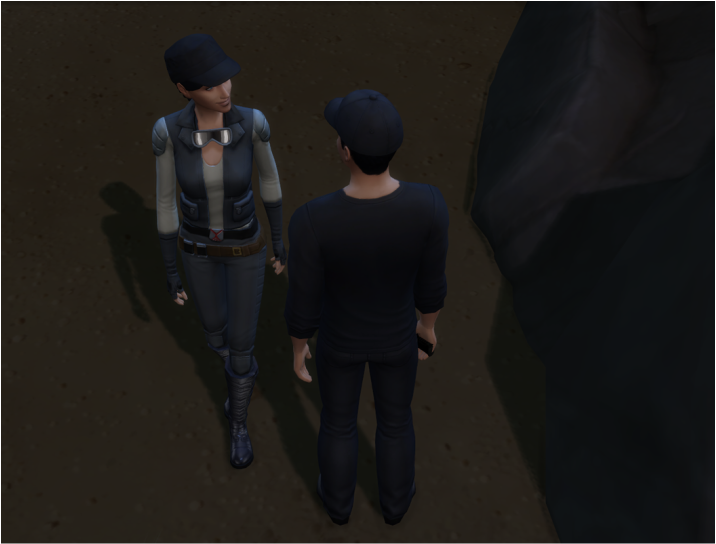 She felt she ought to say something like: Be careful or at least Good luck.
She opened her mouth. "Please..." she started, but under his steel stare couldn't bring herself to show him she was worried about him. He could be so arrogant sometimes! He waited for her to finish.
"Just don't shoot anyone," she said finally.
"Of course," he said turning away and without looking back he ran in a crouch to the house. 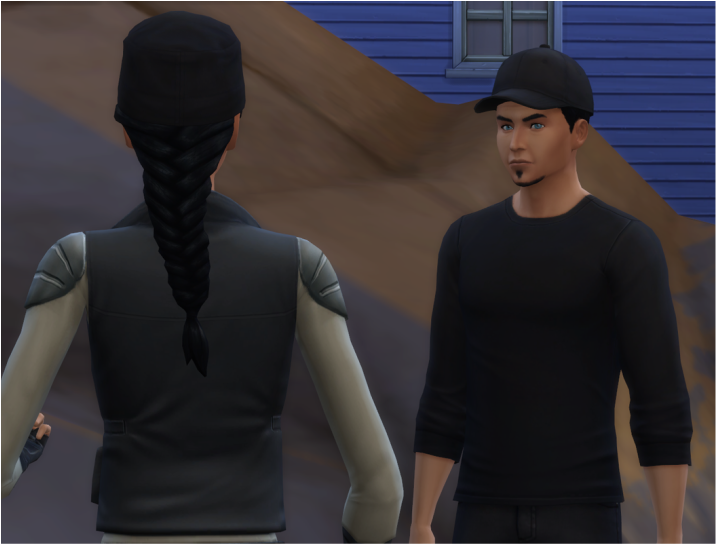 He was considering his options. The house was too small, with probably one or two rooms. There was no way to sneak in and eliminate the kidnappers one by one. Direct approach then. This could get messy. 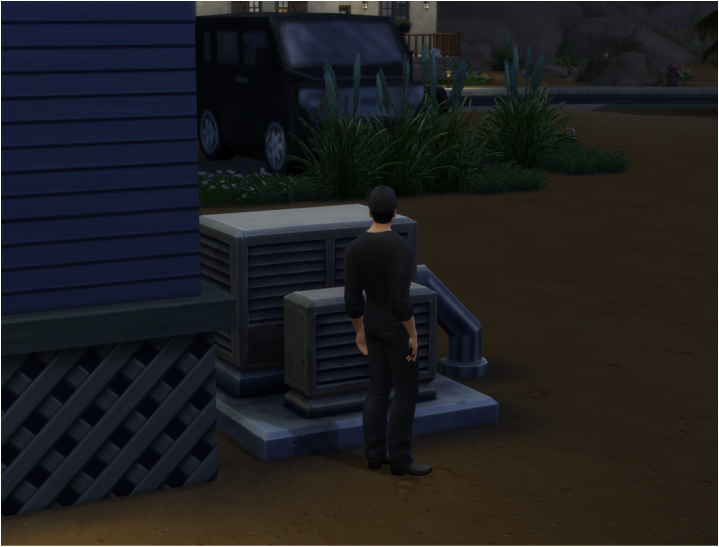 He could pretend the albino man had sent him, but he probably wouldn't fool his mistress. No tricks. He's not that kind of guy. Kill or be killed, that's his way.
Please, just don't shoot anyone.
He sighed. She would never understand. 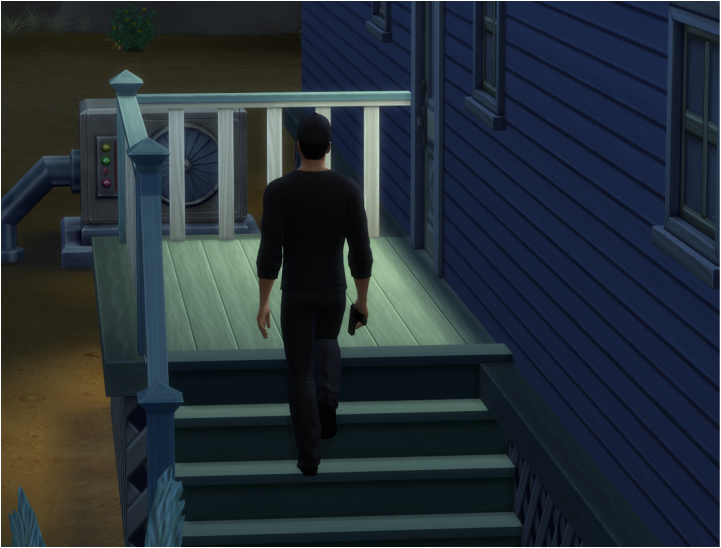 Reaching the door he suppressed the thought of Beryl. Should I knock? he smirked. 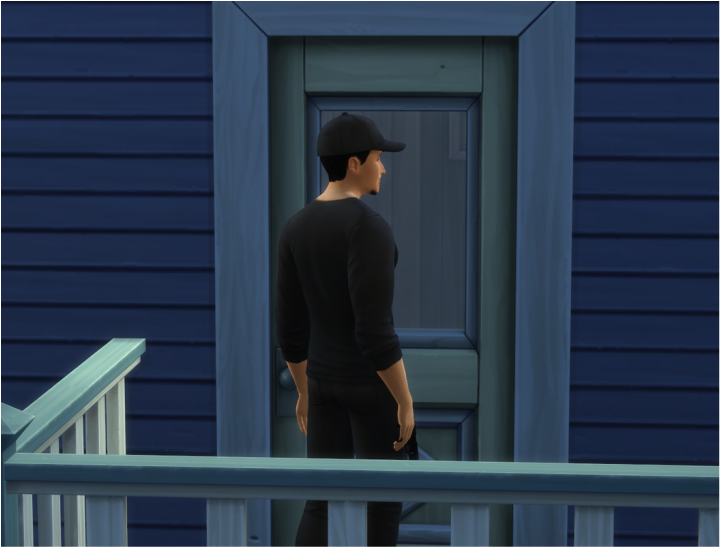 And just like that he entered. The three of them were so surprised that a stranger has just walked into their house they didn't start shooting right away. He noticed the bassinet in the middle and knew shooting was out of question. A stray bullet could hurt the baby. 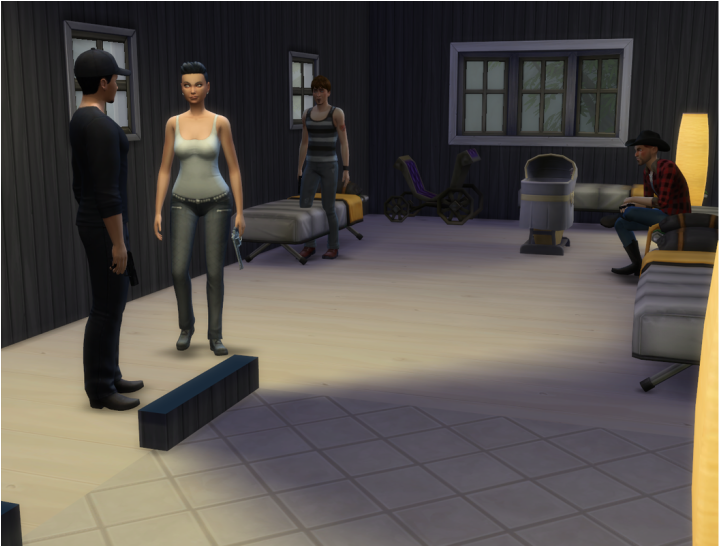 Woman: "Who the plum are you and what are you doing in our house?"
​ 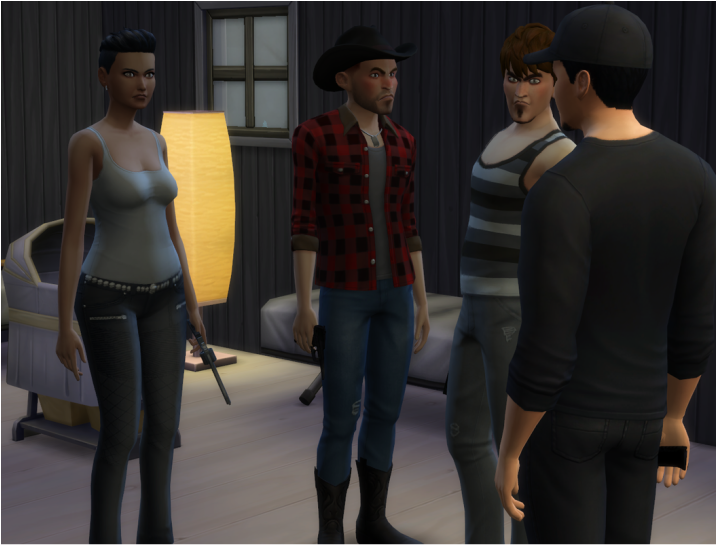 Tony: "Child Protective Services. Your neighbours reported child abuse in his house. I'm here to take care of it."
Man in red shirt: "Why are you carrying a gun?"
Tony: "Because I get the worst cases. I'm the ultimate solution." 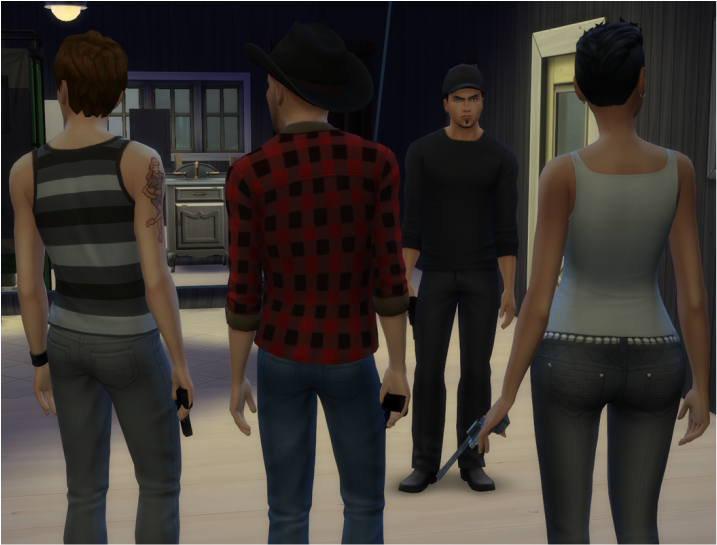 Tatooed man: "But... but I and Larry took a good care of the baby. I even sang lullabies to him. We can't be the worst case! We can't!"
Tony: "Look around! This place calls for a sanitary inspection! How can you keep a baby in this horrible environment! You are not fit to be parents!" 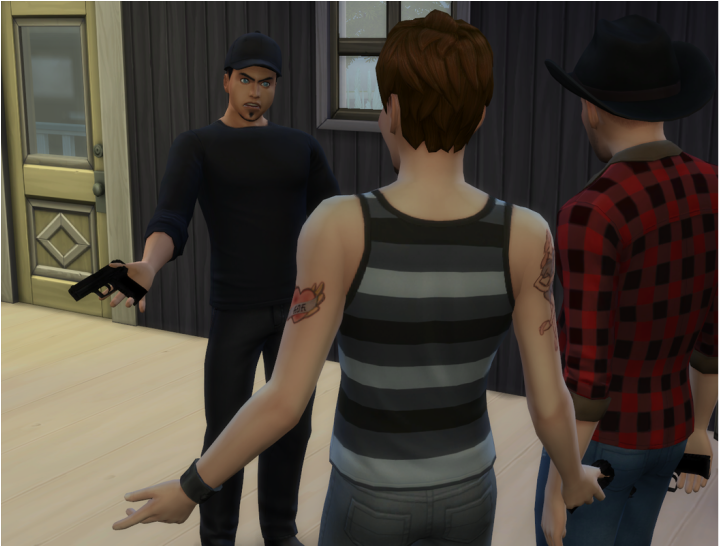 Larry: "Ned is telling the truth. We took care of him like he was our own!"
[Ooops!]
Tony: "I hereby strip you all of the title of a parent for good!"
Larry, Ned: "Noooooo!" 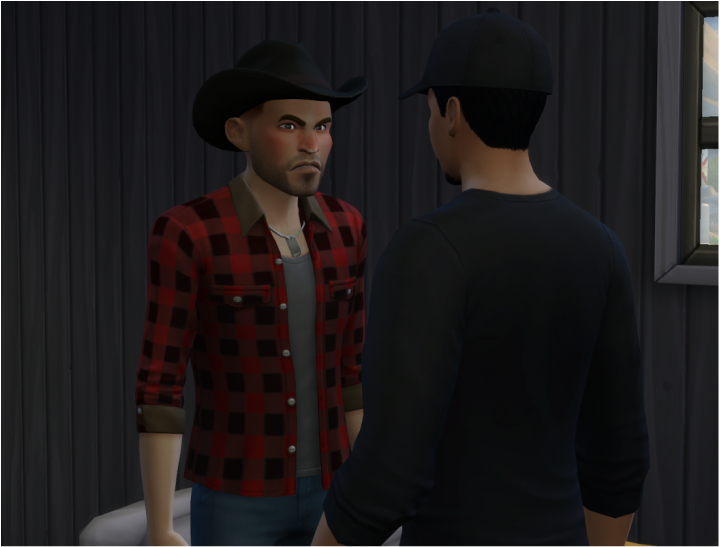 Woman: "Oh, shut up, you two idiots. I don't know who he is, but he's definitely not from CPS. Kill him, for plum's sake!" 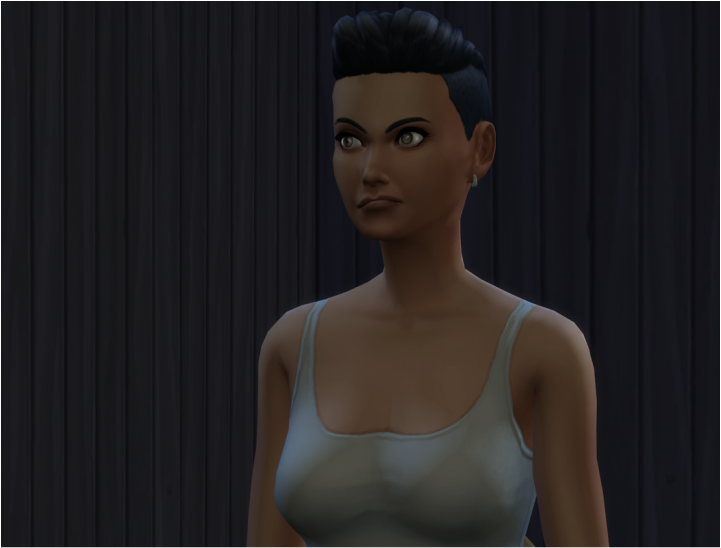 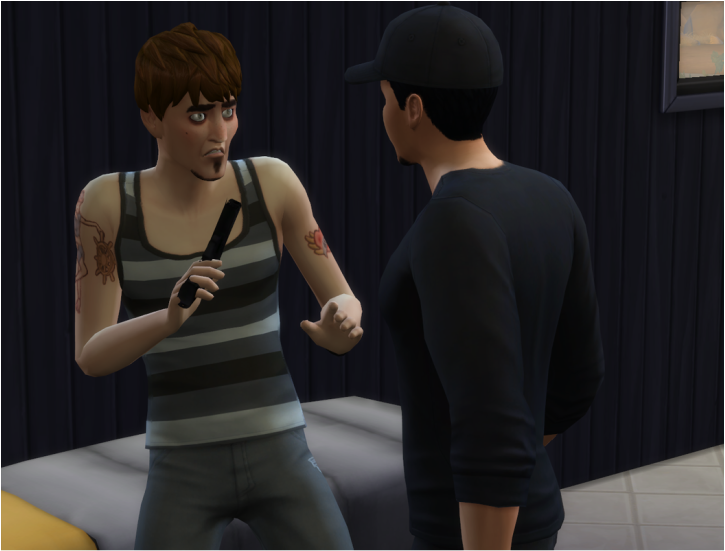 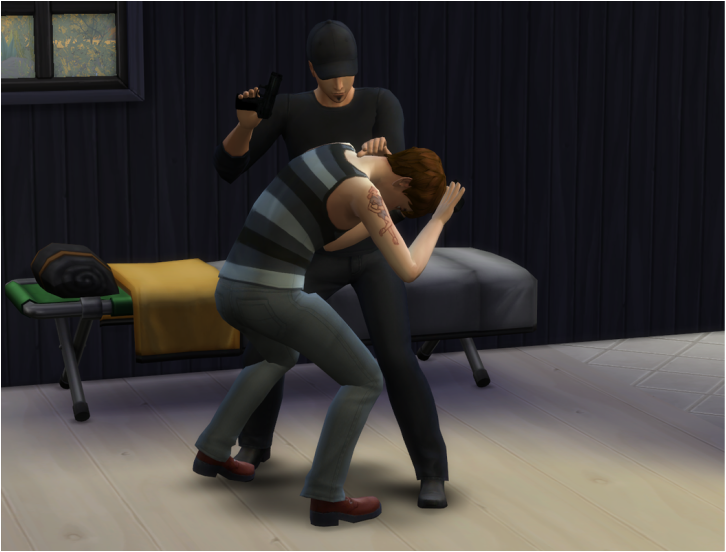 Tony: "You aren't even worth a bullet." 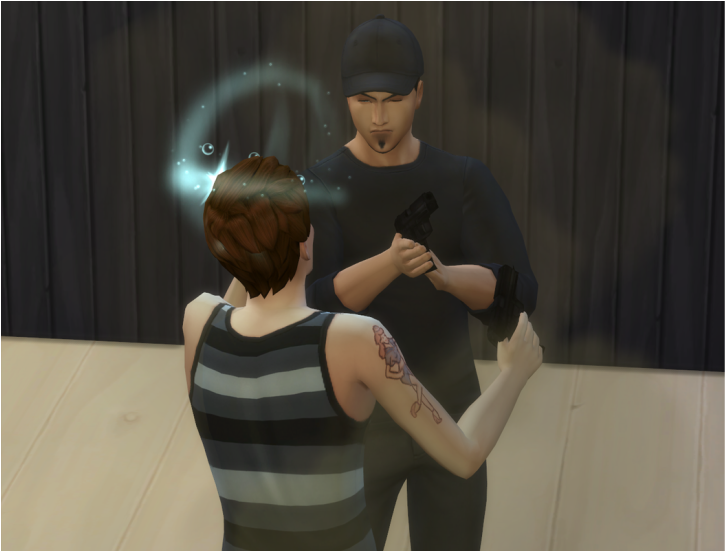 Tony: "It's a miracle the baby didn't die from your foul breath!" 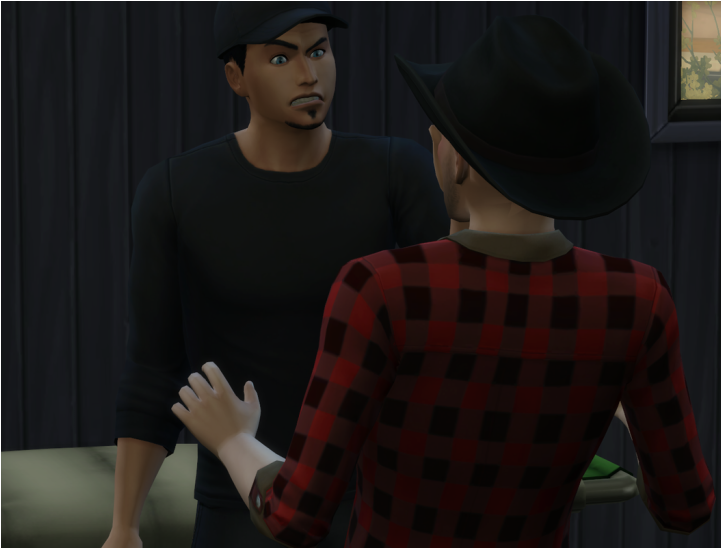 Tony: "This will teach you!" 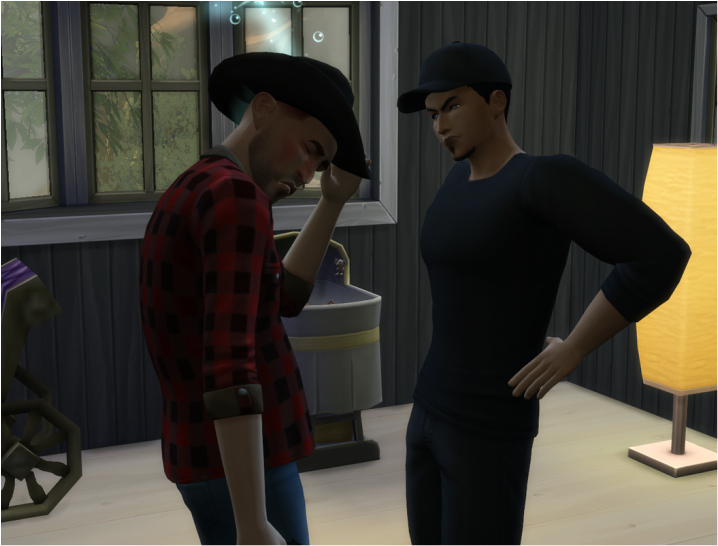 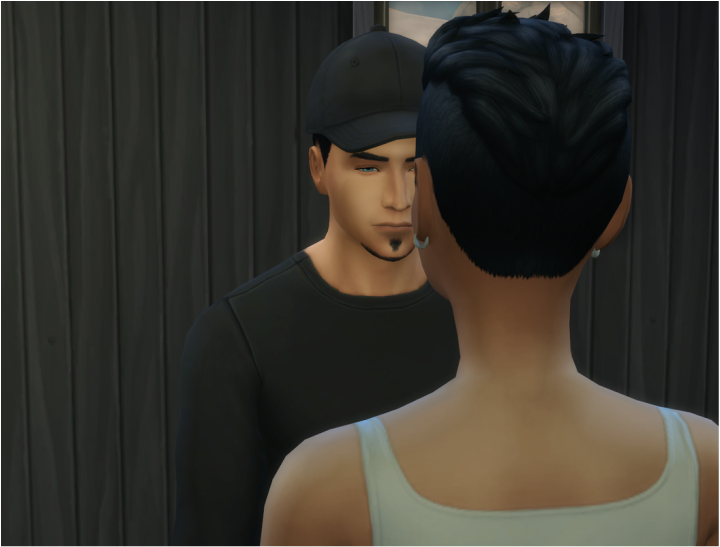 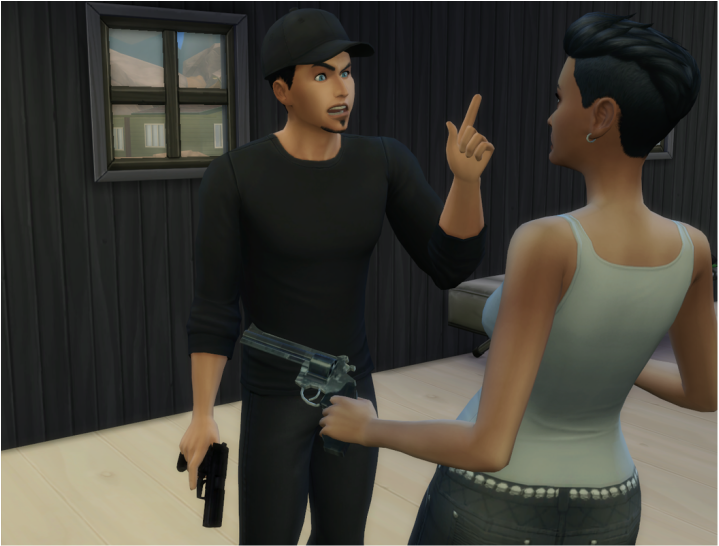 Tony: I should probably kill this one, but I think I let Beryl call the police. 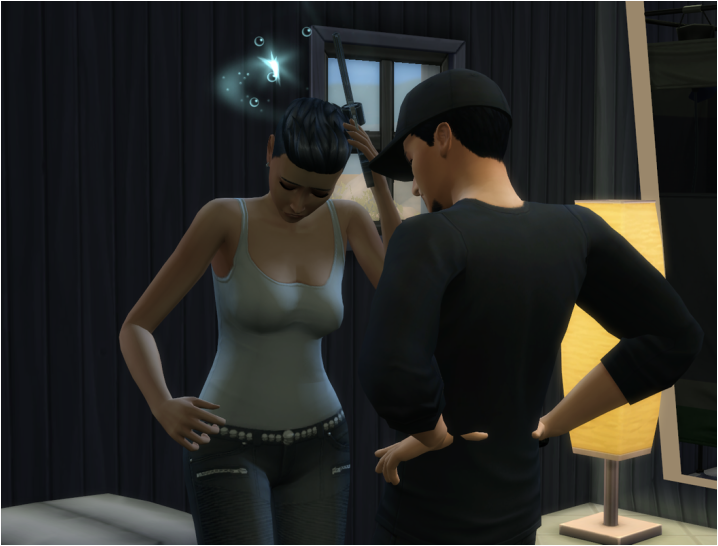 ﻿Meanwhile, Beryl was getting more and more impatient.
Beryl: "What is taking him so long? What if he's hurt? He can be dead before the police arrives. I have to help him."
She decided to pretend her car ran out of gas and that she's looking for help. Hopefuly the woman won't recognize her in this outfit and with no makeup. She had to check up on Tony. 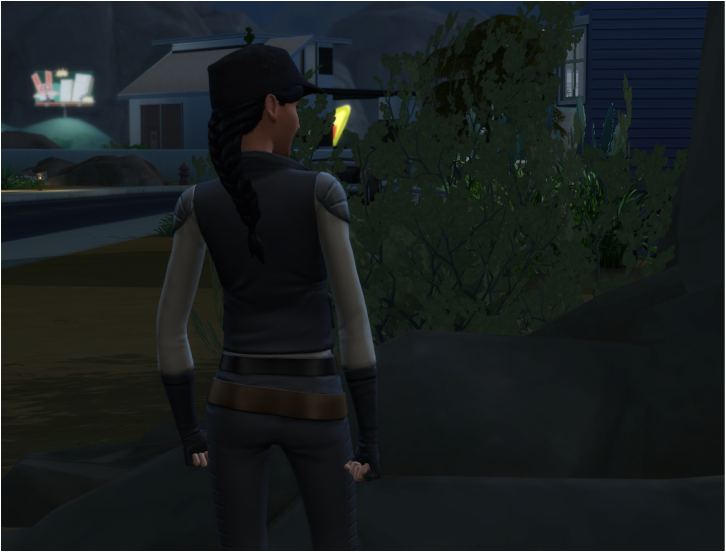 The house was ominously quiet. She feared the worse. Maybe everyone inside was dead, including Tony and her brother. The idea of a dead baby was unbearable. 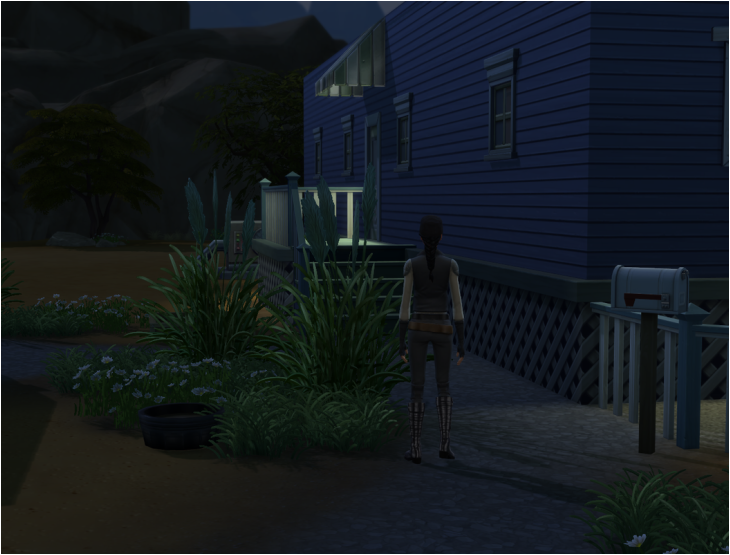 She entered and saw it. Tony was standing in the middle of the room, surrounded by dead bodies and urns. First she felt relief that he's alive and there's no dead baby as she had feared. But then she was horrified by so much death.
"You killed them all," she whispered to his back. "Murderer." 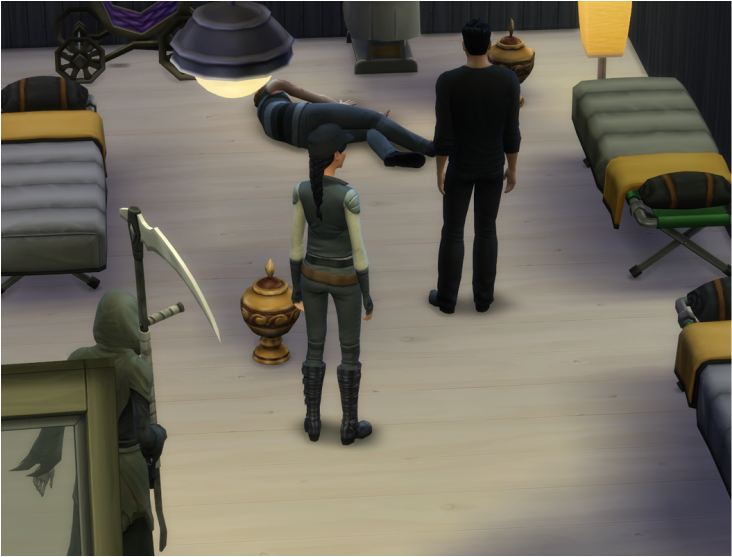 She was surprised when he turned to her with pained look on his face.
​Tony: "Yes, I am a murderer," he said. "I killed a lot of people, but believe it or not, I didn't killed these people. Did I beat them? Yes. Did I shoot them? No. I might have humiliated them, made them angry, but I didn't kill them, because you insisted I wouldn't. They were so angry that their hearts failed. 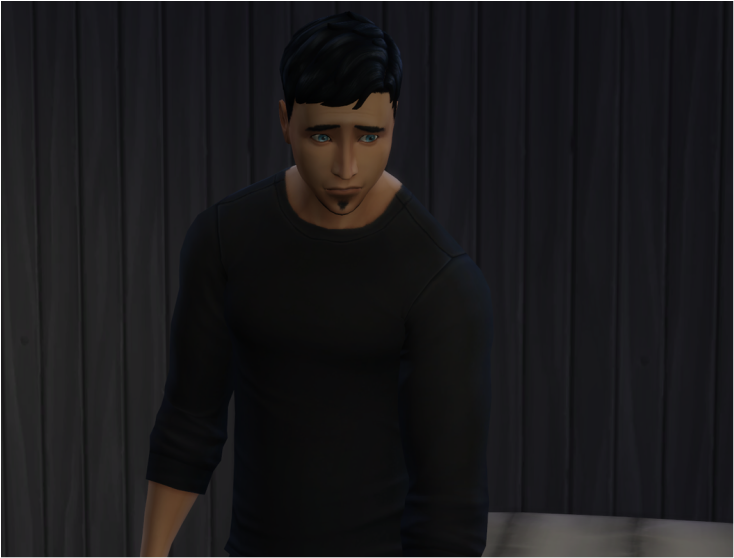 Beryl: "They should have stood a trial."
Tony: "Or not if they got a good lawyer. And considering for whom they were working they would probably walk free."
​Beryl: "I don't think so. No kidnapper can walk free."
Tony: "You have too much faith in justice, Beryl."
Beryl: "And you lack it completely."
Tony: "Look at your brother over there. Isn't it ironic that a murderer saved him today?" 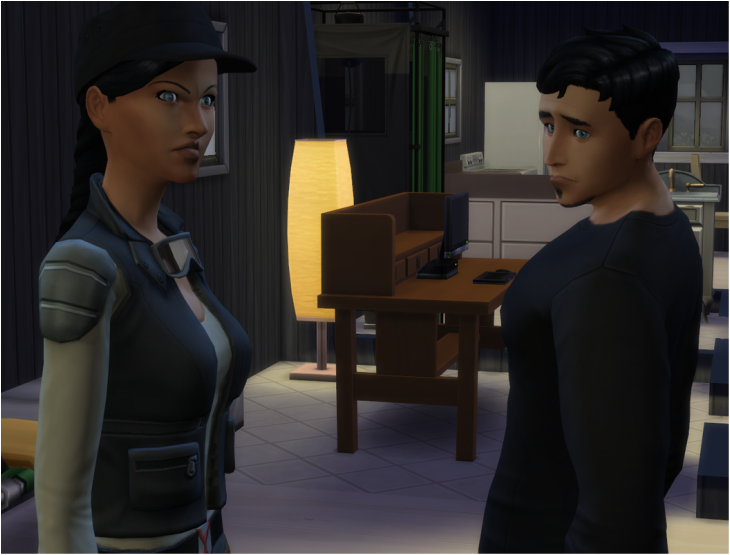 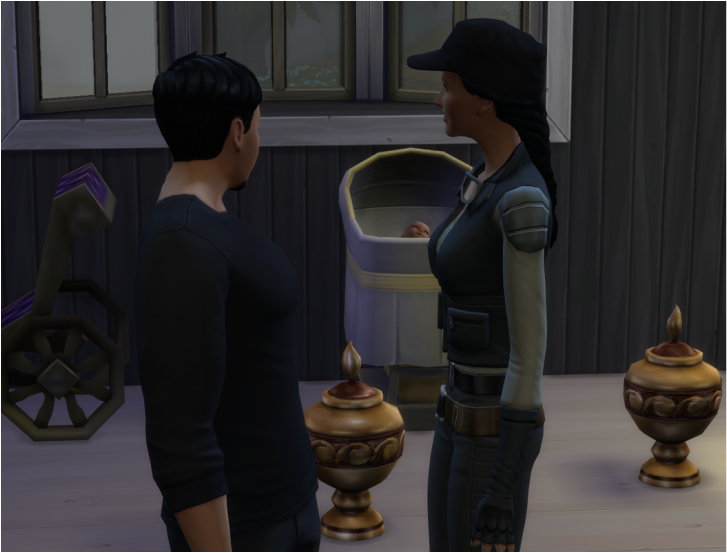 Tony: "Hey, little guy. You don't have the slightest idea in what danger you were, do you?"
Beryl: "Isn't it ironic, Tony, that you are a hero in this very moment and when I pay you, you'll be just another greedy criminal?" 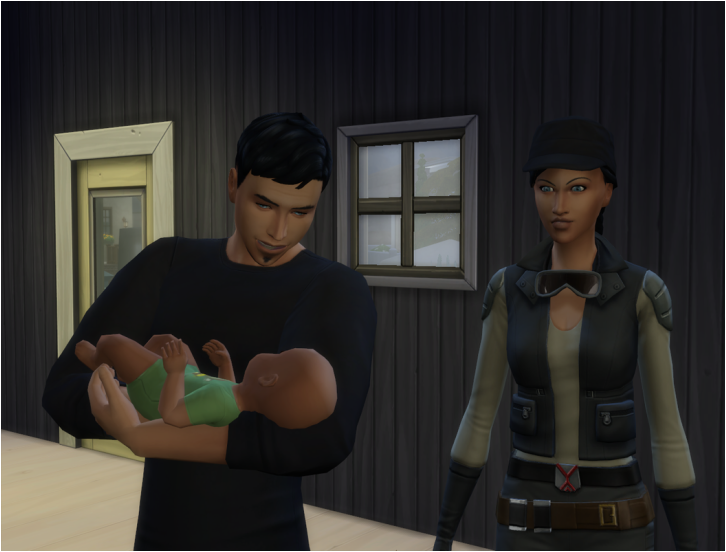 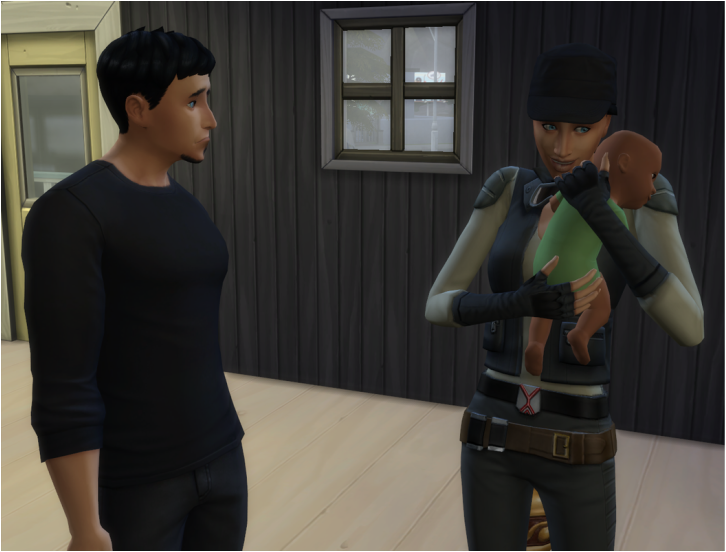