The life in the Heffners household slowly returned to normal, if you can say so after a child kindapping, unexpected pregnancy and the Police asking way too many questions and paparazzi waiting at your doorstep. The triplets aged up to schoolchildren. 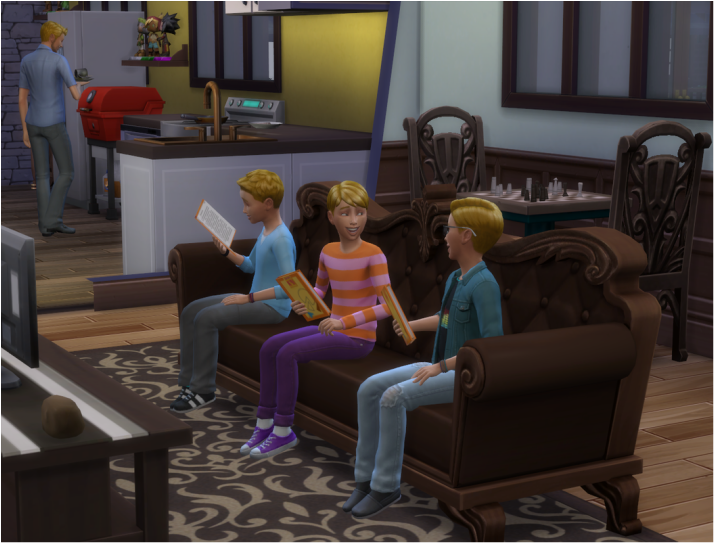 Thought they look identical, they couldn't be more different. Brian is a curious, outgoing kid. He absorbs knowledge like a sponge. Bradley on the other hand is nature loving boy, who prefers spending time by the pond to going to school. He's always the last to leave for school and never does his homework willingly. Bernd loves music just like his sister Beryl. You can often see him dancing to the music from the stereo in the living room.

Little Brian seems completely unaffected by the kidnapping. After having heard the story of what happened to him when he was a baby, he curiously chases every passing stranger and asks him weird questions. 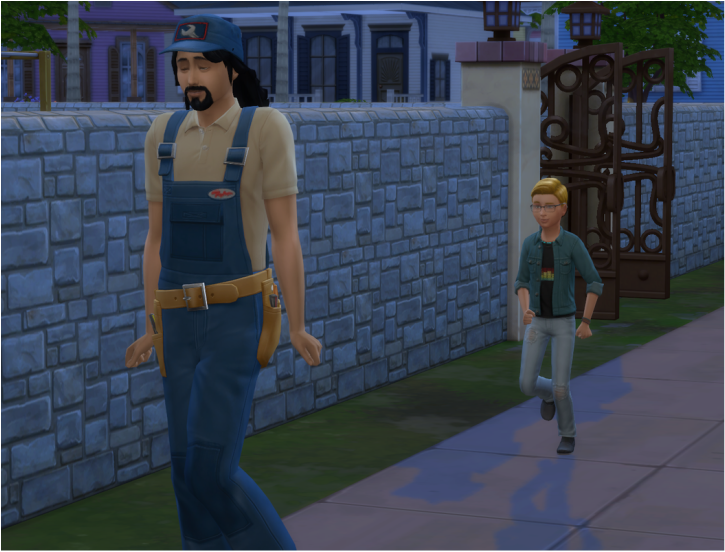 Brian: "Hello. Do you kidnap children?"
Repairman: "WHAT? Of course not!"
Brian: "See that you don't! My sister would catch you anyway." 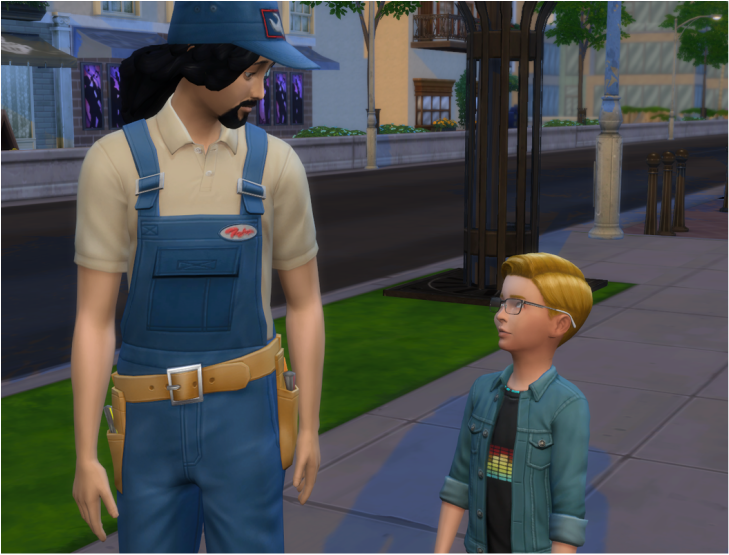 ​
However, Beryl was way too pregnant to go catching any kidnappers. The baby was kicking her hard the last trimester making her wish the pregnancy was finally over. 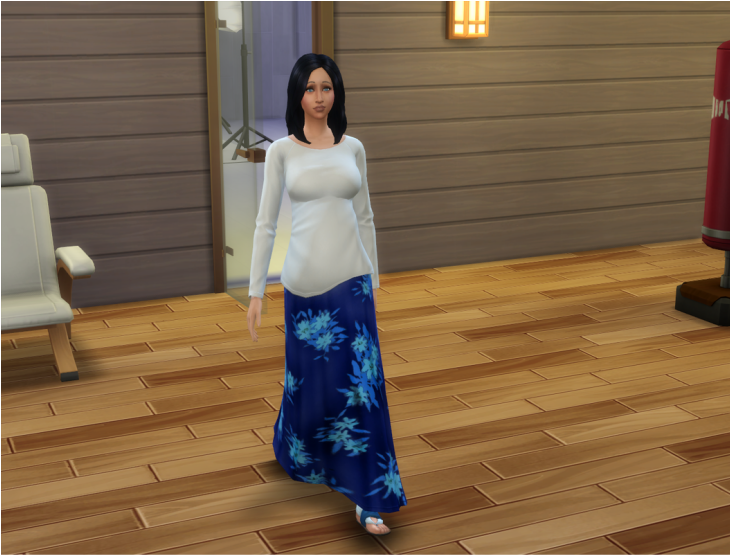 Thankfully the rest of the family did their best to make her feel as comfortable as possible. It also meant keeping certain newspaper articles out of her sight... 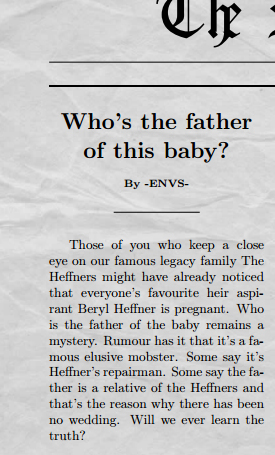 ​When the time had come, Beryl gave birth to a beautiful baby boy. She named him Christian. She really wished she could name him Christian Corleonesi-Heffner, but considering Tony's career, she couldn't risk it. She wouldn't put her child in danger by revealing his blood ties. 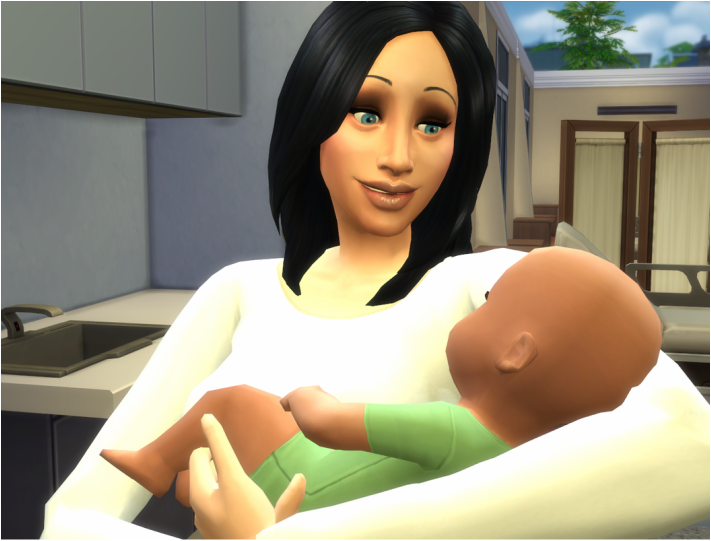 The house is full of children now. Beryl's little brothers and her son keep everyone pretty occupied. 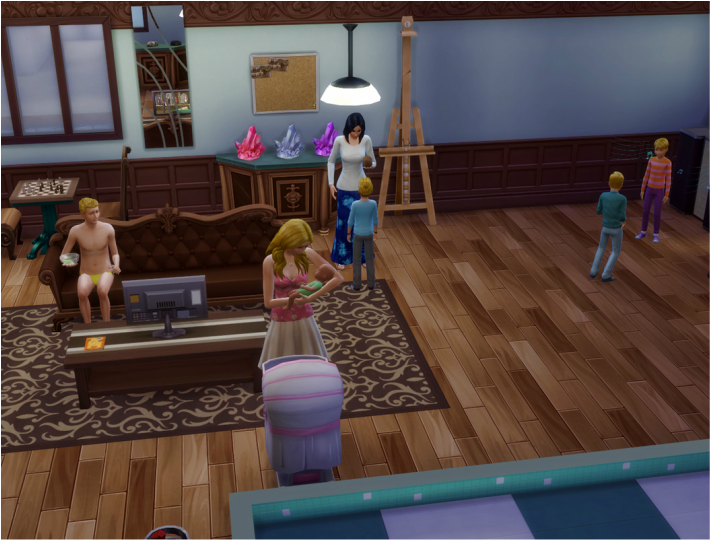 ​Yet Batyr found a time and courage to tell his long-time friend Aliyah he had feelings for her. Luckily for him she shared them.
​So atop of everyone's busy schedule they started planning a wedding. 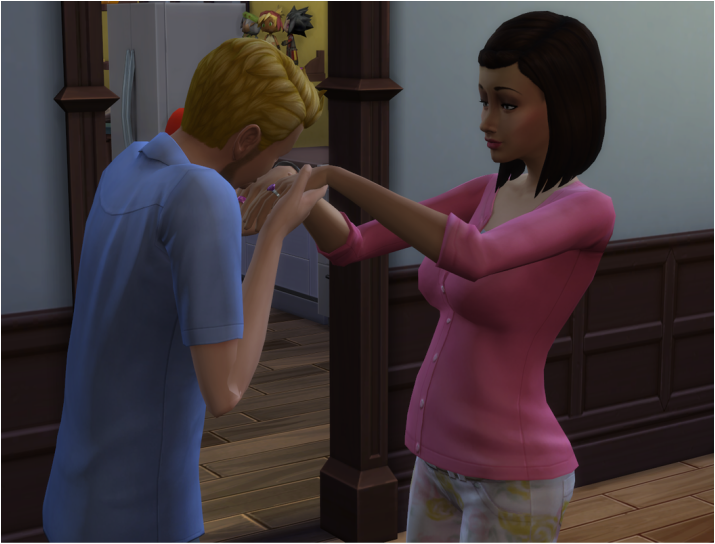 ﻿
By the time they exchanged their vows, Aliyah was far in her second trimester. 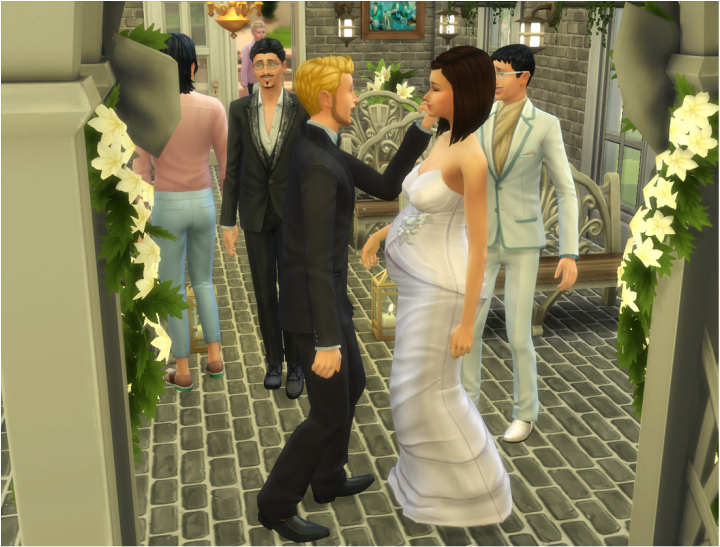 The caterer was making eyes at Beryl instead of cooking. No need to say it had no effect on her.

Beryl: "Shouldn't you be baking a cake or something? Wait, is that a cookbook? You actually don't have much experience with cooking, do you?" 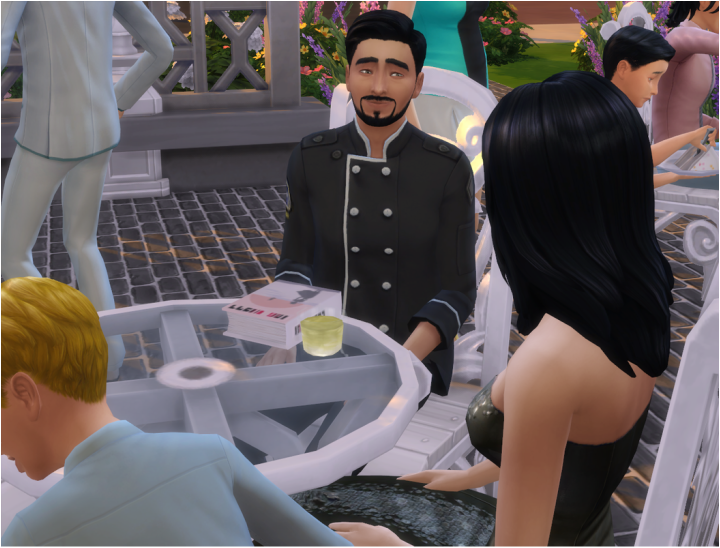 Andrew aged up in an elder and soon after that he completed his lifetime aspiration, when Batyr's and Aliyah's twins were born.
It was time to start thinking about the next heir. The triplets had to age up yet. 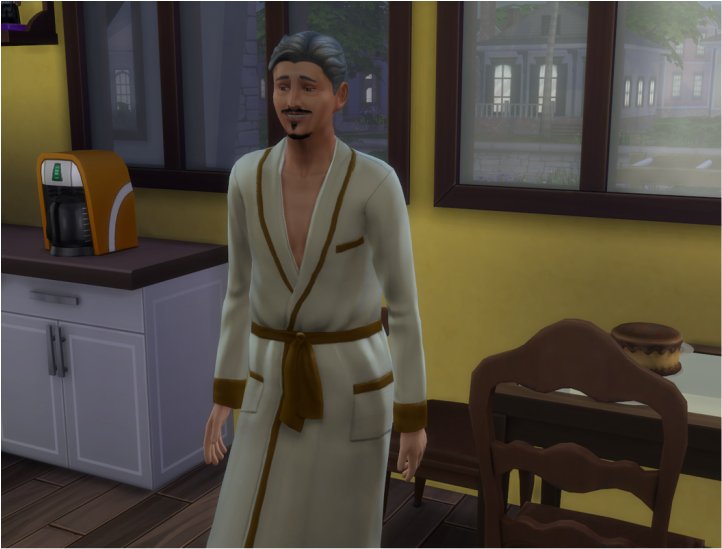 But before that, little Christian aged up to a child. He's the spitting image of his father, except for the brown eyes. His haircut makes him look even more like Tony to Beryl's delight. And his smile... well let's just say everyone's heart's at danger. 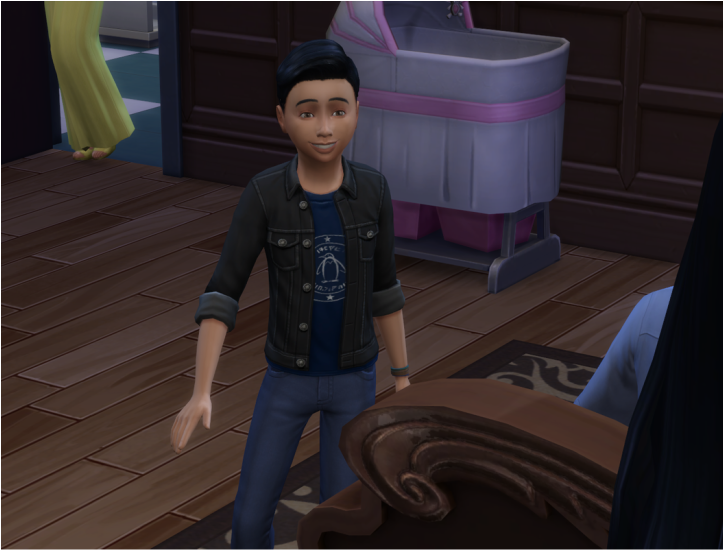 He's cute as a button. Always cleaning the dishes and making his homework spontaneously. Best kid any sim could wish for. Hard to believe he was giving Beryl such a hard time during the end of her pregnancy. 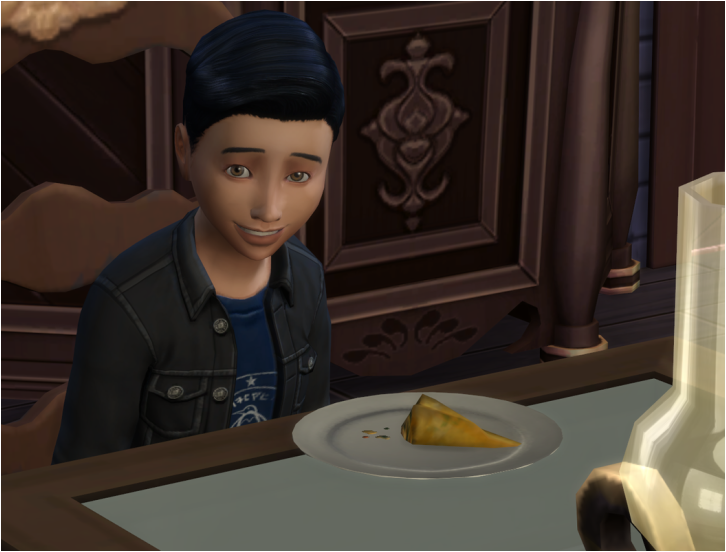 He loves playing pirates with his uncles. He always mans the cannon on the ship (probably inherited love for guns after his father too), while uncle Bradley prefers shouting orders or steering the ship. 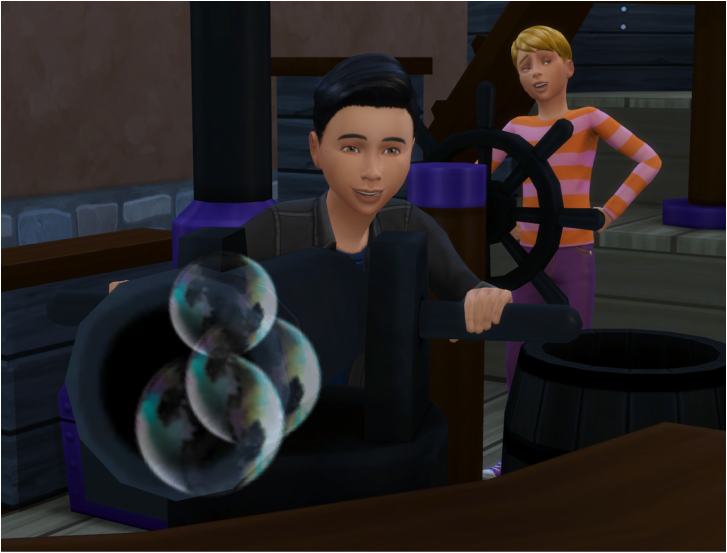 No one would guess this kid has a gloomy trait. He's smiling all the time. Everyone loves him. Especially his grandma. 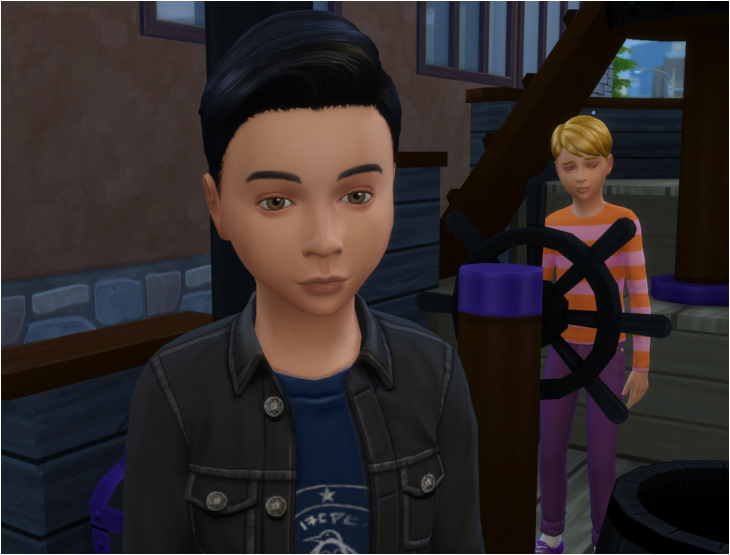 Babs bought him this green dino that has immediately become his most favourite toy. 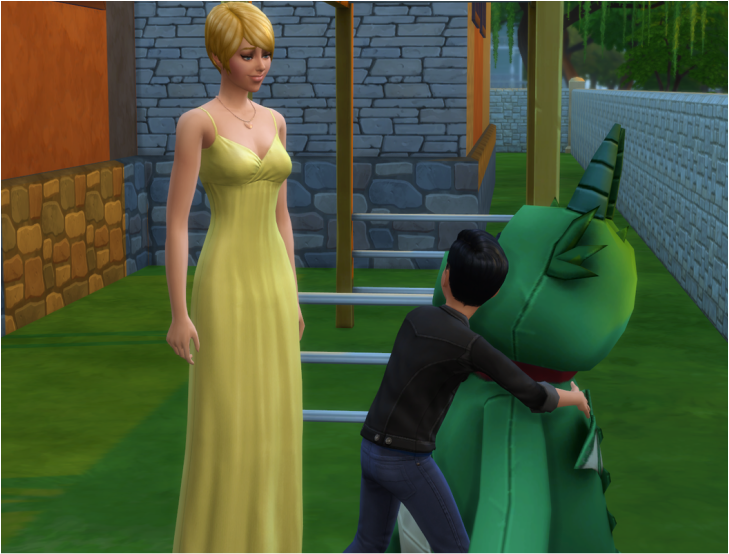 Christian: "I love you, grandma. You're the best grandma in the world!"
Babs: "Oh, thank you! I love you too, Chris." 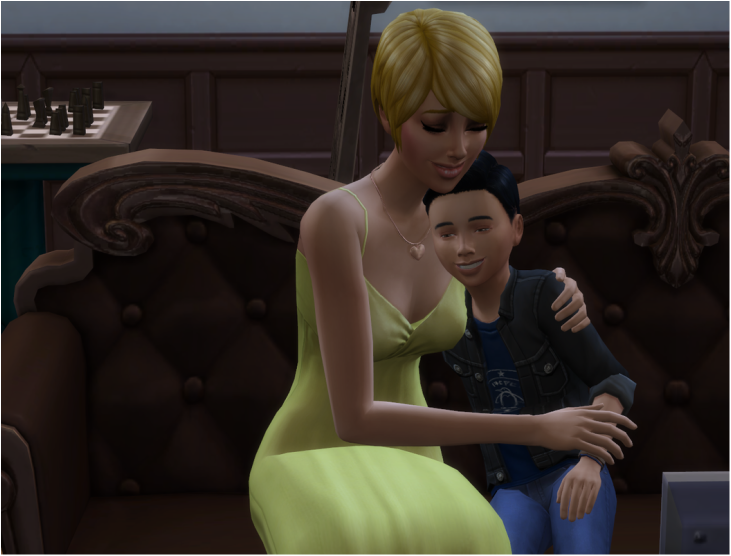 One morning Beryl was collecting the mail and in addition to regular bills there was an envelope with a Willow Creek stamp. 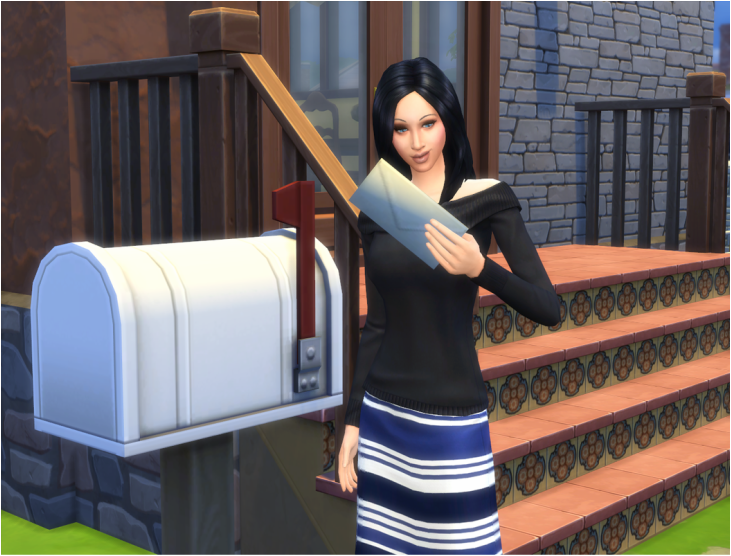 "We received an invitation," said Beryl to her mom who just finished baking a fresh bread.

Babs: "Invitation to what?"
Beryl: "There's a fundraiser in Willow Creek next month. They'll be collecting money for a new orphanage in Oasis springs."
Babs: "Oh. We should definitely go! I could use some fun time away from home!"
Beryl: "Willow Creek. Isn't it the town where the cream of society lives in their opulent mansions?"
Babs: "In a manner of speaking we are part of this high society now too, Beryl." 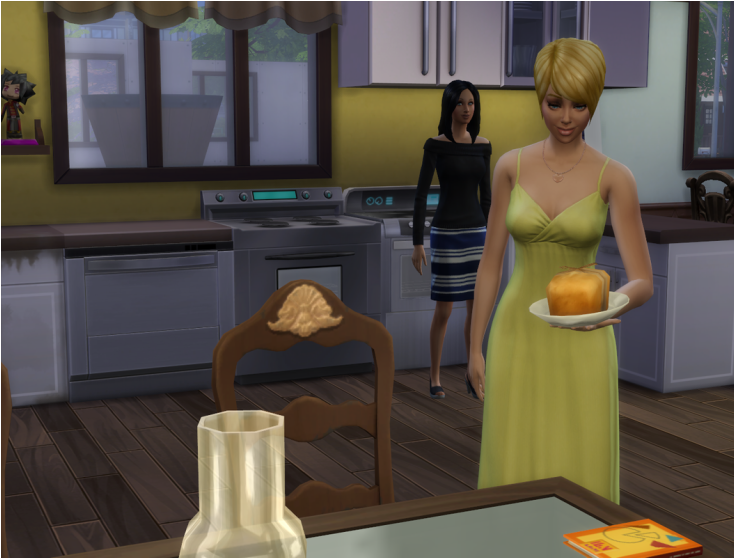 ​Beryl: "So you want to go?"
Babs: "I'd love to! And you're going too. You have to check if there's any prospective husband for you and a father for Chris."
Beryl: "Mom, don't start... Chris already has a father..."
Babs: "...he's never seen and probably never will."
Beryl: "Mom. I'm not ready for a relationship with another man."
Babs: "I'm not saying you have to marry the first man you meet. Just make friends, okay? Now go and confirm our attendance." 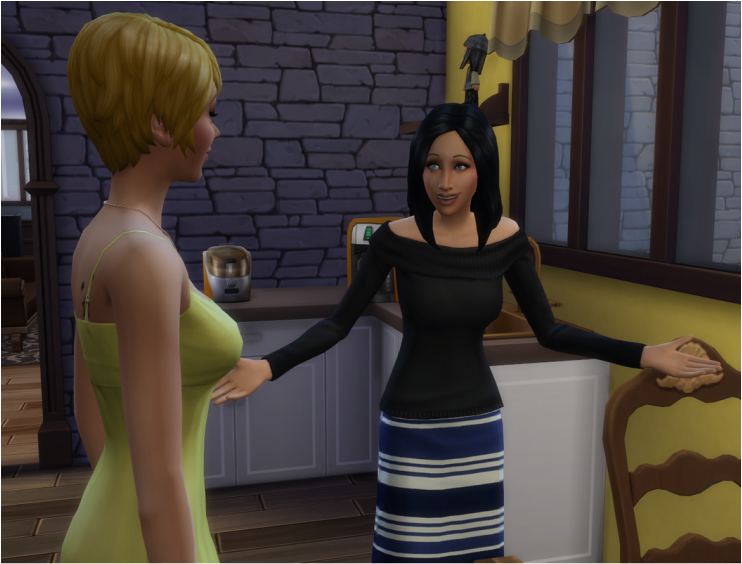